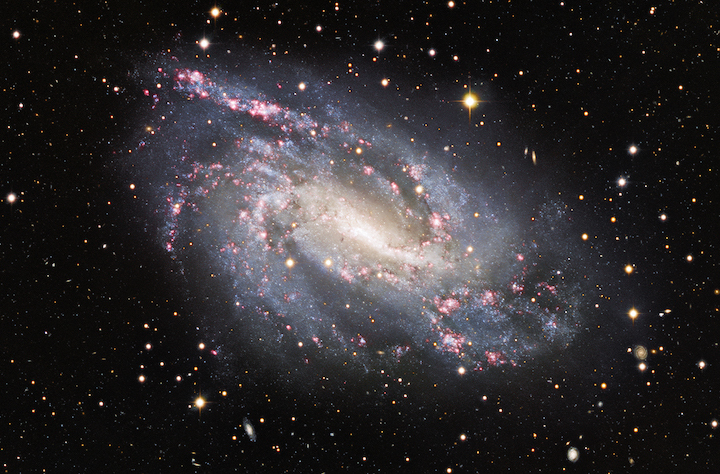 noirlab2016a – Cosmic Fireworks
The spiral galaxy NGC 925 reveals cosmic pyrotechnics in its spiral arms where bursts of star formation are taking place in the red, glowing clouds scattered throughout it.
Credit: KPNO/NOIRLab/NSF/AURA

This archival image from the Nicholas U. Mayall 4-meter Telescope at Kitt Peak National Observatory, a Program of NSF’s NOIRLab, captures a snapshot of some cosmic pyrotechnics — the asymmetric spiral arms of the galaxy NGC 925, which host dazzling bursts of star formation. This stunning image is only one example of the spectacular firework displays that astronomy has to offer.

If you’re looking for fireworks for the US celebration of the Fourth of July, then look no further than the world of astronomy. The cosmic firework at the center of this image, the spiral galaxy NGC 925, resembles a vast pinwheel, with a bright central bar and swirling spiral arms. The red bursts strewn throughout NGC 925 are eruptions of star formation, which can be traced by observing conspicuous hydrogen-alpha emission.

NGC 925 lies about 20 million light-years from Earth in the direction of the constellation of Triangulum (The Triangle), and at first glance, it resembles a classic, ordered spiral galaxy. However, closer inspection reveals a subtle asymmetry — the galaxy is slightly lopsided. The spiral arm which appears at the top of this image is prominent and well-defined, but the lower half of the galaxy is more disordered and “fluffy.” This strange lopsidedness and the sparkly fireworks may be a result of the galaxy’s turbulent history, past interactions with other galaxies having distorted and disturbed NGC 925. Interactions like these are also likely to have sparked star formation during the history of this galaxy.

Accompanying NGC 925 are a host of distant background galaxies, from striking face-on spirals to hazy elliptical galaxies. Each of these galaxies — though they appear tiny in this image — is a vast assembly of billions of stars and huge quantities of gas and dust. The image is also studded with stars much closer to home, with foreground stars from our own galaxy spread across the image. These are easily spotted thanks to diffraction spikes — the prominent criss-cross patterns caused by the secondary mirror support structure of the telescope. NGC 925 lies between these two extremes — much further than the stars in the Milky Way, but closer than the legions of distant background galaxies.

Using an astronomical telescope to capture the details of NGC 925 is no simple task. Unlike the camera in your phone, astronomical cameras can usually only capture one color at a time. Colorful images like this one are made by taking exposures using filters that only allow specific colors of light to pass and later combining the data into one richly hued image.

Despite the diverse array of astronomical objects captured in this single image, this snapshot represents only a tiny portion of the full cosmic fireworks display visible in the night sky. As well as the glittering swirls of stars and starbirth in NGC 925, the sky is full of transient events like supernovae — the explosive deaths of massive stars — and ultra-powerful bursts of energy from colliding neutron stars and black holes.