This October, NASA astronaut Kate Rubins and Russian cosmonauts Sergey Ryzhikov and Sergey Kud-Sverchkov will launch to the International Space Station from the Baikonur Cosmodrome in southern Kazakhstan.

Although NASA astronauts Doug Hurley and Bob Behnken successfully launched to the station in May from the United States aboard the SpaceX Endeavour, launches to the space station on the the Russian space vehicle Soyuz will still continue in the part of Kazakhstan leased to Russia.
This is the second spaceflight for Rubins and Ryzhikov and the first for Kud-Sverchkov. 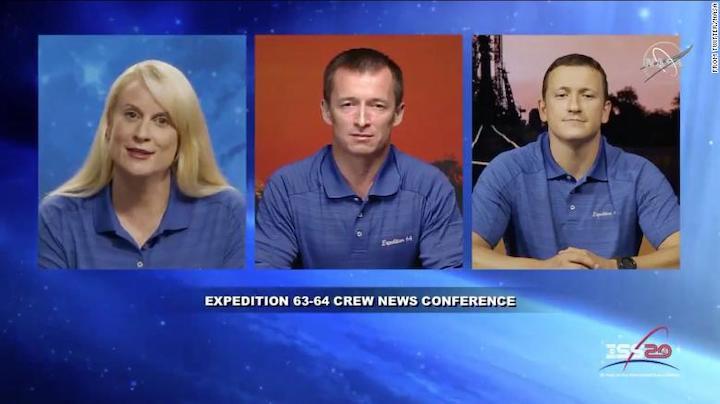 (From left) NASA astronaut Kate Rubins will launch to the International Space Station along with Russian cosmonauts Sergey Ryzhikov and Sergey Kud-Sverchkov in October.
They will launch on October 14 at 12:45 p.m. ET and spend six months on the space station.
Rubins previously spent six months on the station between July and October 2016. Prior to becoming an astronaut, she was a scientist who studied viral diseases, cancer biology, microbiology and immunology.
Ryzhikov is looking forward to his second spaceflight and has fond memories of his first between October 2016 and April 2017, which slightly overlapped with Rubins' stay in 2016.
"For me, the most vivid impressions are experiencing weightlessness in zero G. You can compare it to dreaming when you're a kid. And observing the Earth from afar," Ryzhikov said.
Kud-Sverchkov is prepping for his first trip to the space station.
"Of course I am very excited about this upcoming trip," he said. "But right now, I'm intensely focused on the last period of training before launch. We still have some training to do and that will last until the launch date."
Rubins was the first person to sequence DNA in space. She is looking forward to continuing her sequencing research in new ways by studying the microbiome of the space station environment.
"The space station has been separate from Earth for 20 years," Rubins said. "How is it different? The space station is its own biome with its own resources, with humans coming and going. We want to see what these closed environments do when they've been separate for a long time."
Her upcoming mission will include conducting research using the Cold Atom Laboratory on the station to study atoms as well as a cardiovascular experiment that follows up on an investigation she worked on during her first spaceflight, according to NASA.

During their stay, these astronauts will also be joined by the Crew-1 flight, bringing the total astronauts on the station to seven.
Crew-1 will carry four more astronauts to the space station through the agency's Commercial Crew program: NASA astronauts Victor Glover Jr., Michael Hopkins, Shannon Walker and Japan's Soichi Noguchi.
Crew-1 is going through system checks on Earth. It has more capabilities than Endeavour and will be able to dock on top of the space station.
The team at NASA estimated it will need six weeks between the return of Hurley and Behnken on Endeavour and the launch of Crew-1 to review data. Currently, NASA is targeting a launch by the end of the year.
"It's going to be incredible to have seven people on the space station," Rubins said. "It's designed to handle that. We've been preparing for this the last few years by enhancing the scrubbing of carbon dioxide and testing new technology for exploration. Seven crew members aboard allows us to test new atmosphere revitalization and new spacesuit components. We can really increase our science output."
The astronauts are training and preparing for the mission wearing masks, maintaining social distancing and constantly sanitizing equipment used for training.
"In October, I still think we'll be struggling with this virus and it's going to be around for a while," Rubins said. "But what we're seeing from the science side of things is an incredible amount of effort.
"I've never seen so many scientists working toward one goal. Scientists are finding new ways to collaborate, they're speeding up research and the pace of discoveries is incredible. I'm heartened by what we can achieve together to handle this disease and really ensure that we emerge from it."
Quelle: CNN
Raumfahrt - ISS-ALLtag: New crew will launch to the International Space Station in October
304 Views
Created with page4