The Five-hundred-meter Aperture Spherical Radio Telescope (FAST) is the largest telescope with the highest sensitivity in the world. Extragalactic neutral hydrogen detection is one of important scientific goals of FAST.

Recently, an international research team led by Dr. CHENG Cheng from Chinese Academy of Sciences South America Center for Astronomy (CASSACA) observed four extragalactic galaxies by using the FAST 19-beam receiver, and detected the neutral hydrogen line emission from three targets with only five minutes of exposure each. This is the first publication for FAST to detect extragalactic neutral hydrogen.

The research paper was published in Astronomy & Astrophysics Letter. 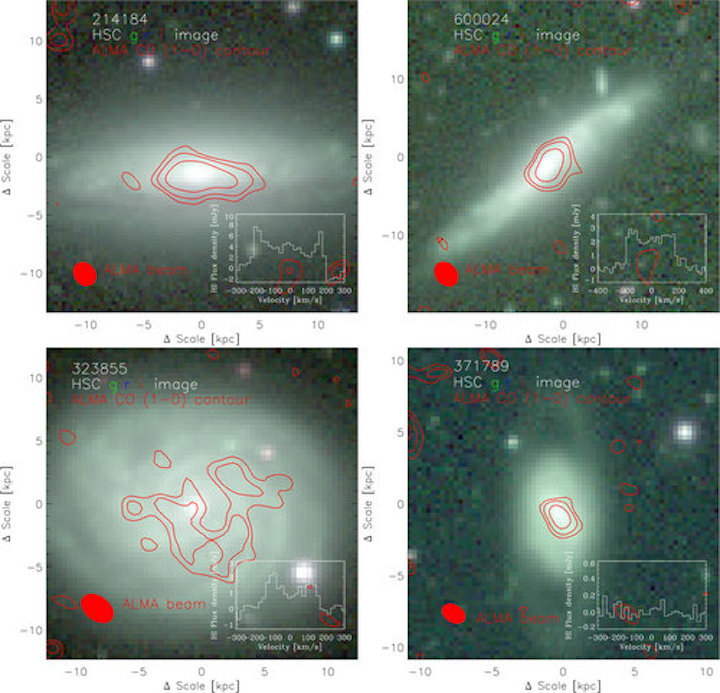 Fig. 1. The optical color images of the four galaxies for FAST observation. The red contours are the previous CO observation by ALMA. The white spectra in each panel are the results from FAST (Image by CASSACA)

Neutral hydrogen gas is the most extended baryons in galaxies, while cold gas traced by CO is more concentrated to a galaxy center (red contour in Fig.1). "With dynamical measurements of neutral hydrogen and CO, we can estimate the mass distribution of galaxies at different radii," said Dr. CHENG, first author of the study.

The FAST observation of these galaxies was an important part of an international research project, the Valparaíso ALMA Line Emission Survey (VALES), led by Prof. Edo Ibar from Valparaiso University in Chile.

FAST, with the unpreceded sensitivity, provides a unique chance to observe the extra-galactic neutral hydrogen, and therefore has been added to the list of modern astronomical facilities used by this international collaboration.