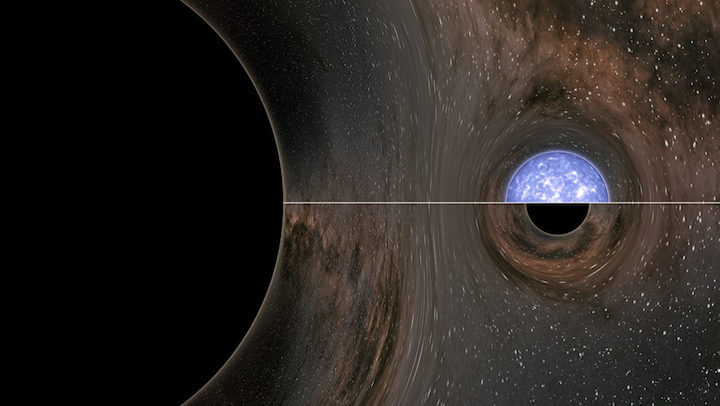 In a first, the LIGO and Virgo gravitational wave detectors have spotted a collision between a black hole (illustrated left) and a mystery object (right), which could be either the heaviest neutron star ever discovered or the lightest black hole.

Ripples in spacetime have revealed a distant collision between a black hole and a mystery object, which appears too massive to be a neutron star but not massive enough to be a black hole.

At first glance, the event — detected by the LIGO and Virgo gravitational wave detectors on August 14, 2019 — looked like a collision between a black hole and neutron star (SN: 8/15/19). But a new analysis of the gravitational waves emanating from the merger tells a different story. It shows that a black hole about 23 times as massive as the sun crashed into a compact object of about 2.6 solar masses, researchers report June 23 in the Astrophysical Journal Letters.

That 2.6-solar-mass object is heavier than the presumed 2.5-solar-mass cap on neutron star size. But it’s smaller than the most lightweight black hole ever observed, which is about five solar masses. “We have [here] either the heaviest known neutron star … or we have the lightest known black hole,” says Cole Miller, an astrophysicist at the University of Maryland in College Park not involved in the work.

Neutron stars, which are dense stellar remnants left behind by stellar explosions, are thought to max out at about 2.5 solar masses because any larger star is liable to crumple under its own weight. Black holes less than about five solar masses are theoretically possible, “we just have had no observational evidence of such low-mass black holes,” says coauthor Vicky Kalogera, an astrophysicist at Northwestern University in Evanston, Ill. That could mean such objects are very rare, or that they’re just so difficult to spot that they’ve been overlooked in past searches.

Unfortunately, this lone merger did not leave behind enough clues for astronomers to figure out the identity of the enigmatic 2.6-solar-mass object. After the U.S.-based Advanced Laser Interferometer Gravitational-Wave Observatory, or LIGO, and its sister experiment in Italy, Advanced Virgo, detected the merger, dozens of ground-based and space telescopes scoured the sky for light radiating from the crash site. But they found nothing.

That observation — or lack thereof — fits with the idea that the mystery object is a black hole, because black hole collisions are generally not thought to give off any light. But it could also fit with the neutron star explanation. Although smashups involving neutron stars can throw off a lot of light (SN:10/16/17), it’s possible that this collision — nearly 800 million light-years away —was simply too far away for telescopes to see its radiation. Or perhaps the black hole swallowed its little neutron star companion in a single gulp, causing it to vanish without a trace.

If that last scenario is true, “this means that [the pair of objects] had its moment of gravitational wave glory,” Miller says, and now the larger black hole forged in the merger is “doomed to wander the vast emptiness of space, probably never emitting another peep.”

Observations of similar events in the future might offer evidence in favor of either the small black hole or big neutron star theory, Kalogera says. If midsize objects in future collisions all tend to be between about 2.5 and three solar masses, she suspects that would mean astronomers are uncovering a heavier variety of neutron star that has been seen in the past. If, on the other hand, astronomers detect many objects whose masses run the gamut from about 2.5 to five solar masses, that may point to filling in a population of previously overlooked, petite black holes.

Kalogera and Miller both lean more toward the idea that the mystery object is a lightweight black hole than a heavyweight neutron star. If it is, that raises another question: how such a pint-size black hole got paired up with a partner so much bigger than itself.

Black holes usually team up with partners of similar heft. Most mergers detected by LIGO and Virgo have involved fairly equally matched black holes (SN: 4/20/20). But the larger black hole implicated in this merger was about nine times as massive as its enigmatic counterpart, raising questions about what could have brought such a strange couple together. Here, too, astronomers hope future gravitational wave observations of such oddball pairings may offer answers.