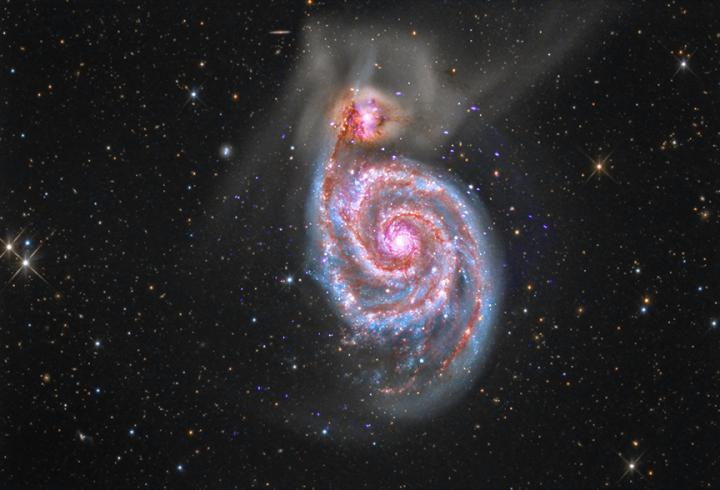 Galaxy M51 is a spiral galaxy, about 30 million light years away, that is in the process of merging with a smaller galaxy seen to its upper left.

Researchers have found that rocky exoplanets which formed early in the life of the galaxy seem to have had a greater chance of developing a magnetic field and plate tectonics than planets which formed later. As both these conditions are considered favourable to the development of life, this means that if life exists in the Galaxy, it may have developed earlier than later, and that planets formed more recently may have less chance of developing life.

"Plate tectonics is important for habitability, and it looks like the optimum conditions plate tectonics existed for planets forming early in the galaxy's lifespan, and may be unlikely to easily recur. For life, maybe that was as good as it gets".

Exoplanets - planets in orbit around distant stars - have been attracting great interest because of the possibility that some of them may harbour life. Presenting the results at the Goldschmidt geochemistry conference, Professor Craig O'Neill (Director of the Macquarie Planetary Research Centre, Macquarie University) continued:

"Because of the great distances involved, we have a limited amount of information on these exoplanets, but we can understand some factors, such as position, temperature, and some idea of the geochemistry of the exoplanets. This allows us to model how they develop".

Using huge simulations involving hundreds of processors on the Australian National Computing Infrastructure, the team ran the parameters through the ASPECT* geodynamics code, which simulates the development of the interior of planets. O'Neill's group was able to show that many early planets would have tended to develop plate tectonics, which is favourable to the development of life.

He commented: "Plate tectonics act as a kind of thermostat for the Earth creating the conditions which allow life to evolve. The Earth has a lot of iron in its core, and we had assumed that this would be necessary for tectonic development. However we found that even planets with little iron may develop plate tectonics if the timing is right. This was completely unexpected".

The development of plate tectonics has a major knock-on effect. "Planets which formed later may not have developed plate tectonics, which means that they don't have this built in thermostat. This doesn't just affect the surface temperature, this means that the core stays hot, which inhibits the development of a magnetic field. If there's no magnetic field, the planet is not shielded from solar radiation, and will tend to lose its atmosphere. So life becomes difficult to sustain. A planet needs to be lucky to have the right position and the right geochemistry at the right time if it's going to sustain life", said Professor O'Neill.

Researchers know that the overall chemical balance of the Galaxy has changed over time for diverse reasons, such as material coalescing into stars and planetary bodies, or being expelled through supernova. This means that the interstellar material available to form planets is significantly different to that available in the early galaxy.

"So the planets which formed earlier did so in conditions favourable to allow the development of life" said Craig O'Neill, "These conditions are becoming increasingly rarer in our galaxy."

"Over the last few years, amazing projects such as the NASA Kepler mission have located thousands of planets orbiting around other stars. However, these exoplanet observations alone provide very basic information. It is so important to combine observing campaigns with large simulation projects like this, that really tell us something about the geological evolution of planets formed at different stages of galactic evolution. This enables us to build a picture of what these strange worlds might look like, and how habitable they may be".

Sara Russell is a member of the Scientific Committee of the Geochemical Society. She is Professor of Planetary Sciences and leader of the Planetary Materials Group at the Natural History Museum, London. She was not involved in this work, this is an independent comment.

As of 5th June, NASA has confirmed the detection of 4158 exoplanets in our galaxy, see https://exoplanets.nasa.gov/ . The closest exoplanets yet found orbit the star Proxima Centuri, which is about 4 light years from Earth (latest data indicates either 2 or 3 exoplanets).

The Goldschmidt conference is the world's main geochemistry conference, hosted by the Geochemical Society and the European Association of Geochemistry. Held annually, it covers such material as climate change, astrobiology, planetary and stellar development and conditions, chemistry of Earth materials, pollution, the undersea environment, volcanoes, and many other subjects. For 2020 the scheduled Hawaii congress has been moved online, and takes place from 21-26 June, see https://goldschmidt.info/2020/index. Future congresses are in Lyon, France (2021) and the rescheduled Hawaii congress (2022).

*NOTE: See Advanced Solver for Problems in Earth's ConvecTion https://aspect.geodynamics.org/ ASPECT was developed by the University of California (Davis) with funding from the National Science Foundation.

Astronomie - Life in the galaxy: maybe this is as good as it gets?
252 Views
Created with page4