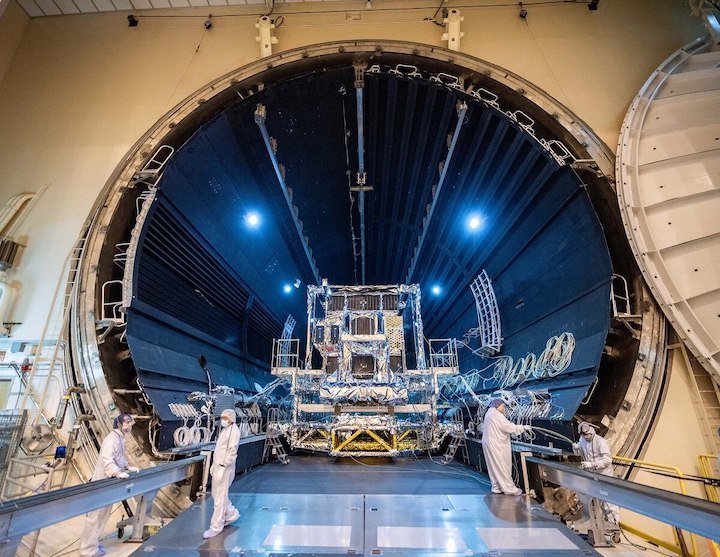 The Space Force’s next missile warning satellite has successfully completed two months of testing to ensure it will survive in the harsh environment of space, according to the program’s prime contractor Lockheed Martin.

The company said that the fifth geosynchronous Space Based Infrared System satellite completed its thermal vacuum (TVAC) testing June 9, bringing it one step closer to launch. During testing, the satellite was exposed to heat and cold in a depressurized atmosphere that mimics the environmental effects of space.

The SBIRS constellation provides missile warning capabilities to the U.S. military, detecting missile launches all around the globe and feeding that data to the nation’s missile defense architecture. The constellation currently includes four geosynchronous satellites with two additional satellites in highly elliptical orbits for global coverage.

The successful testing — which began April 16 ― is also a major milestone for Lockheed Martin, since SBIRS GEO-5 is the first military satellite built on the company’s modernized LM 2100 bus.

“The completion of TVAC can be attributed to a tremendous effort from the Air Force, Lockheed Martin, Aerospace Corporation, and supporting contractor teams,” Tucker White, SBIRS GEO-5 assembly, test, and launch operations lead from the government’s program office, said in a statement. “The teams worked around the clock and finished on schedule to their original projection. This test phase is vital to any space vehicle test regime and takes GEO-5 one step closer to providing enhanced missile detection to our warfighters.”

The satellite is expected to launch in 2021.

In 2014, Lockheed Martin was awarded $1.86 billion to build the fifth and sixth geosynchronous SBIRS satellites, which will replace the first two in the constellation. Those two satellites will be the final additions to the SBIRS constellation. Plans for two more satellites were scrapped in 2018. Instead, the Department of Defense is investing in the Next Gen Overhead Persistent Infrared, which will consist of three satellites in geosynchronous orbit and two covering the polar regions.