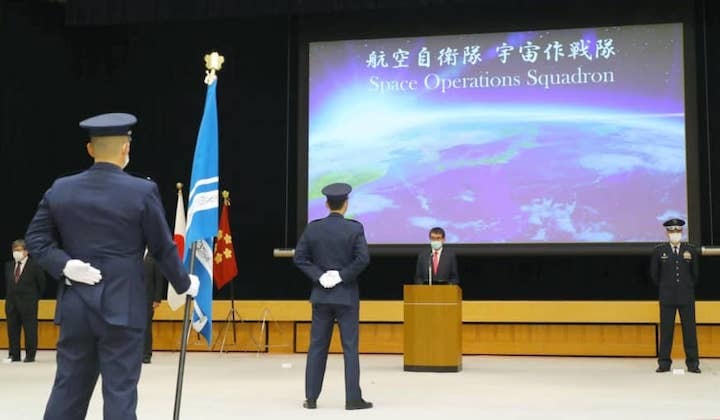 On May 18, about six months after the United States established the Space Force, Japan launched a new Space Operations Squadron. These moves by the two allies reflect the importance that each country attaches to outer space given its key role for information technology, military strategy, and the economy.

The U.S. and Japanese actions in outer space are also unfolding in the larger context of intensifying strategic competition. Alongside its broader "Belt and Road" initiative, China has been taking measures to develop a “Space Silk Road,” expanding its global space network while promoting space cooperation with developing countries.

One such attempt may be the Chinese effort within the framework of the Asia-Pacific Space Cooperation Organization. APSCO, established in 2008, is an intergovernmental organization designed to provide a cooperative mechanism for developing countries and to promote multilateral cooperation through resource sharing in space science, space technology, and space applications in the region to facilitate the capacity building of its members. APSCO currently includes China, Bangladesh, Iran, Mongolia, Pakistan, Peru, Thailand, Turkey and Indonesia as members, with Mexico as an observer.

Additionally, Beijing has been advancing space-related foreign aid to South American and African countries such as Argentina and Namibia. Furthermore, China has been expanding its ground-based tracking stations in countries including Namibia, Kenya, Pakistan, Brazil, Argentina, Chile, and even Australia and Sweden.

Considering the increasing importance of outer space in national power, these measures taken by China in space policy can bring significant implications for the ongoing strategic competition. To respond to the Chinese attempt to expand its footprint in outer space, the U.S. and Japan should work together to promote space cooperation with other countries in the Indo-Pacific region.

Such cooperation should be implemented in a way that helps solve the challenges that regional countries face. For instance, in Southeast Asia, ASEAN countries continue to grapple with the following challenges: maritime security, stability, and freedom of navigation; maritime pollution; climate change and increasing disaster risks; information and communication technologies security; and poverty.

To facilitate such cooperation more efficiently, the U.S. and Japan need a common framework. While an integrated framework is ideal, at the very least two countries should closely coordinate and collaborate.

One potential framework for such cooperation is the Asia-Pacific Regional Space Agency Forum. Established in 1993, APRSAF is currently operated under the leadership of the Education, Culture, Sports, Science and Technology Ministry, and Japan Aerospace Exploitation Agency. Space agencies, governmental bodies, international organizations, development assistance agencies, private companies, universities, and research institutes from over 40 countries and organizations participate in the APRSAF. The key advantages of the APRSAF are the openness and flexibility with which any entities can participate, the forum’s voluntarism and cooperativeness, and the concreteness of its activities to solve regional issues.

These characteristics, particularly its openness and voluntarism, may be compatible with the idea of the “ASEAN Way,” making it more palatable for ASEAN countries to pursue cooperation with the U.S. and Japan without being overly concerned about antagonizing China.

The other potential vehicle for cooperation is SERVIR. SERVIR started in 2004 and is a joint venture between the U.S. Agency for International Development and the U.S. National Aeronautics and Space Administration to help improve environmental decision-making among developing nations in eastern and southern Africa, the Hindu-Kush region of the Himalayas, and the lower Mekong River basin in Southeast Asia. For instance, the SERVIR-Mekong project promoted the use of publicly available satellite imagery and geospatial technologies to the lower Mekong countries of Myanmar, Cambodia, Laos, Thailand and Vietnam.

Since the space domain is a critical arena of informational, military, and economic competition, the U.S. and Japan should not overlook China’s ambition through the Space Silk Road and should prevent the same problems that accompany the BRI from emerging in space. Considering the broad nature of strategic competition, the U.S. and Japan must expand and integrate their effort to cooperate with space developing countries.