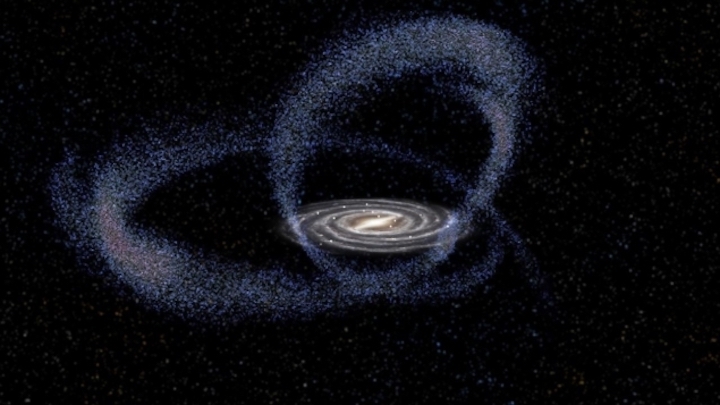 The solar system may have been formed in a long-ago collision between the Milky Way and its orbiting companion the Sagittarius dwarf galaxy. That is the conclusion of astrophysicists in Spain, who have analysed data from the Gaia space observatory. This cosmic “fender bender” – which occurred as Sagittarius’ orbit plunged it through the plane of our galaxy – helped to concentrate cosmic dust in and usher in a period of heightened star formation.

First identified as a satellite galaxy of the Milky Way in 1994, the Sagittarius Dwarf Spheroidal Galaxy is around one tenth of the diameter of the Milky Way. Made up of four main globular clusters of stars, our elliptical-shaped neighbour is spiralling around our galaxy on a polar orbit about 50,000 light-years from the galactic core. This brought the galaxy through the plane of the Milky Way several times in the past. Some researchers have even suggested that these collisions over the past six billion years helped to create the Milky Way’s trademark spiral structure.

In their study, Ruiz-Lara and colleagues used data from the European Space Agency’s Gaia telescope to examine the luminosities and colours of the stars that lie within around 6500 light-years of the Sun, as to determine the star formation history of our stellar neighbourhood. They then compared this with existing models of stellar evolution.

The researchers identified three periods in galactic history where star formation appeared to occur at an increased rate — peaking at around 5.7, 1.9 and 1 billion years ago. This corresponds broadly to the times at which the Sagittarius galaxy is believed to have been passing directly through the Milky Way’s disc.

“At the beginning you have a galaxy, the Milky Way, which is relatively quiet. After an initial violent epoch of star formation, partly triggered by an earlier merger […] the Milky Way had reached a balanced state in which stars were forming steadily,” explains Ruiz-Lara. The effect of Sagittarius falling into the Milky Way, he added, was to “disrupt the equilibrium, causing all the previously still gas and dust inside the larger galaxy to slosh around like ripples on water.”

The effect of these so-called ripples would have been to concentrate dust and gas in certain areas of the galaxy — promoting the more rapid formation of new stars as gravity pulled the material together. At the same time, the collisions also act to strip Sagittarius of some of its gas and dust.

Team member and IAC astrophysicist Carme Gallart observes, “It seems that not only did Sagittarius shape the structure and influenced the dynamics of how stars are moving in the Milky Way, it has also led to [its] build-up”. Without these recurring collisions with the dwarf galaxy, she adds, part of the Milky Way’s stellar mass may not have come to exist – at least, not in the form with which we are familiar – and such may have even included our very own solar system.

“The Sun formed at the time when stars were forming in the Milky Way because of the first passage of Sagittarius,” explains Gallart. “We don’t know if the particular cloud of gas and dust that turned into the Sun collapsed because of the effects of Sagittarius or not. But it is a possible scenario because the age of the Sun is consistent with a star formed as a result of the Sagittarius effect.”

According to ESA Gaia project scientist Timo Prusti – who was not directly involved in the analysis – such detailed insights into the Milky Way’s history would not have been possible before the Gaia observatory’s first data release in 2016.

“Some determinations of star formation history in the Milky Way existed before, based on data from ESA’s early 1990s Hipparcos mission,” he explained, adding: “But these observations were focused on the immediate neighbourhood of the Sun. It wasn’t really representative and so it couldn’t uncover those bursts in star formation that we see now.”

“This is really the first time that we see a detailed star formation history of the Milky Way. It’s a testament to the scientific power of Gaia that we have seen manifest again and again in countless ground-breaking studies in a period of only a couple of years.”

The research is described in Nature Astronomy.