The layered sandstone of Mars' Holden Crater evokes the red-rock country of the American Southwest. 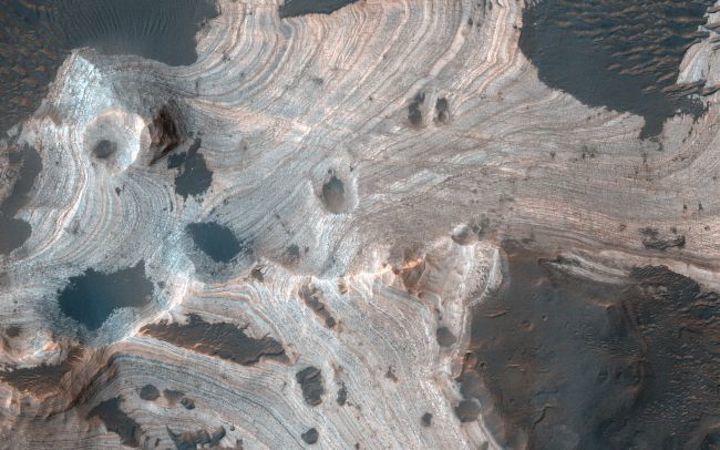 A southern portion of Mars' Holden Crater, as imaged by the HiRISE camera on NASA's Mars Reconnaissance Orbiter.
(Image: © NASA/JPL-Caltech/University of Arizona)

A sliver of Martian geological history takes center stage in a striking photo of a Red Planet crater.

"Much of Mars is covered by sand and dust, but in some places stacks of sedimentary layers are visible," NASA officials wrote Monday (June 8) in a description of the photo.

"In this image, exquisite layering is revealed emerging from the sand in southern Holden Crater," they added. "Sequences like these offer a window into Mars' complicated geologic history."

That history includes a stretch long ago when the planet's surface was likely capable of supporting Earth-like life. As work by robotic explorers such as MRO and NASA's Curiosity rover has shown, ancient Mars sported rivers, lakes and, some scientists believe, a huge ocean that covered most of the planet's northern hemisphere.

Everything changed about 4 billion years ago, when Mars lost its global magnetic field. The planet's once-thick atmosphere was then exposed to stripping by the charged particles of the solar wind, and Mars was transformed into the cold, dry world we know today.

Holden Crater was once a potential landing site for Curiosity, by the way. But NASA ultimately selected the 96-mile-wide (154 km) Gale Crater for the six-wheeled robot's rovings.

Holden Crater lies about 26 degrees south of the Martian equator, whereas Gale Crater is at just 5 degrees south.