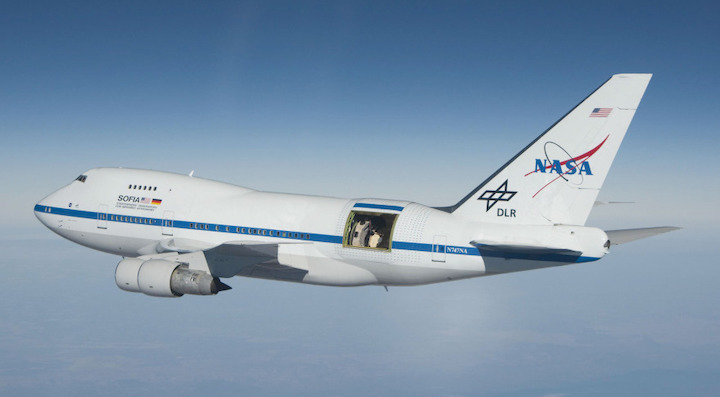 WASHINGTON — A NASA airborne astronomy observatory that has been grounded for nearly three months by the coronavirus pandemic may resume flights later this month as advocates for the program address another cancellation threat.

The Stratospheric Observatory for Infrared Astronomy (SOFIA), a Boeing 747SP with a 2.5-meter infrared telescope, halted flight operations March 19 because of the coronavirus pandemic. NASA cited needs “to ensure the safety of all staff and to comply with state and local county orders” where the plane is based, the Armstrong Flight Research Center in California, as the reasons for halting operations.

Margaret Meixner, director of SOFIA science mission operations at the Universities Space Research Association (USRA), which manages SOFIA program science, said June 2 that efforts are underway to resume flight operations soon. That includes a “mandatory maintenance period” for the aircraft itself as well as checking out its instruments.

“The current plan is to return to SOFIA flights in late June,” she said in a presentation at the 236th Meeting of the American Astronomical Society, held online. Those will start with test flights using one instrument, an infrared camera called HAWC+.

Paul Hertz, director of NASA’s astrophysics division, also discussed plans to resume SOFIA operations at a NASA town all event during the conference June 1. “The SOFIA team is trying to develop a plan that would allow us to conduct science operations, but still maintain best practices for keeping the staff safe during the pandemic,” he said.

A return to flight in late June, Meixner said, would allow SOFIA to proceed with plans for a “deployment” to the southern hemisphere, where the aircraft flies to New Zealand to carry out a series of science flights there for observing celestial bodies not visible in the northern hemisphere. That deployment is scheduled for mid-August to mid-September, she said, using the GREAT spectrometer.

The grounding of SOFIA meant that some planned observations could not be performed. Meixner said observations designated “priority one,” as well as “priority two” programs that had started but had not yet been completed at the time SOFIA was grounded, will be carried over to future observing cycles.

NASA said that SOFIA’s high cost — only the Hubble Space Telescope has a higher annual budget among operational astrophysics missions — could not be justified by a science output “not on par with other large science missions,” according to the agency’s budget proposal. “Dramatic improvement in SOFIA’s scientific productivity is not expected.”

NASA, which had been directed by Congress not to include SOFIA in its senior review of astrophysics missions, instead performed reviews of SOFIA science and mission operations in 2019, resulting in a number of recommendations. They included doing a larger number of flights that last 8 hours instead of 10, which reduces the amount of fuel the plane carries. That, in turn, allows it to spend more time in the stratosphere, where it conducts science observations above most of the atmospheric water vapor that absorbs infrared light.

Hertz, in the town hall meeting, praised SOFIA for its work implementing those recommendations. “I’m really pleased with the way the SOFIA project has taken a hold of this challenge and has gone after it in a big way,” he said. Those changes, he said, “are directed at improving the amount of impactful science that SOFIA does.”

Meixner said she’s hopeful that Congress will reject the proposed cancellation when it takes up appropriations bills to fund the agency, a process expected to begin later this month. She referenced an earlier attempt by NASA, in 2014, to cancel SOFIA that was blocked by Congress.

“We’re working full throttle to support SOFIA now,” she said. “We are hoping, as they’ve done in the past, to put SOFIA back into the budget. It’s really Congress that makes the call on those things, not the president.”