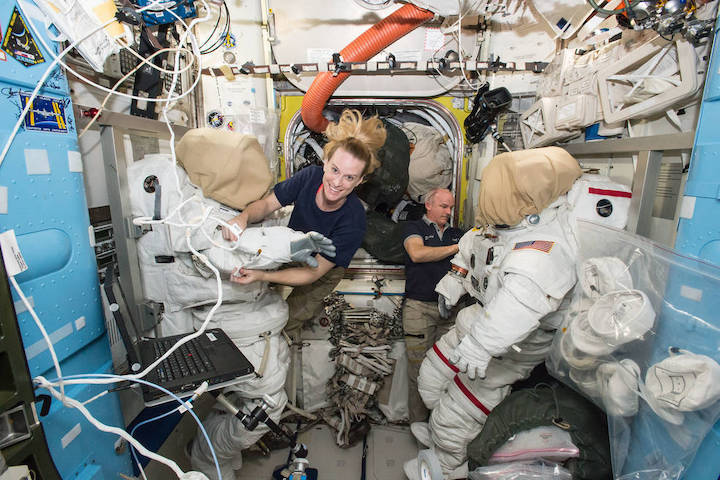 Expedition 48 crew members Kate Rubins (left) and Jeff Williams (right) of NASA outfit spacesuits inside of the Quest airlock aboard the International Space Station. Rubins and Williams will conduct a spacewalk in August 2016 to install the first International Docking Adapter, the new docking port that will enable the future arrival of U.S. commercial crew spacecraft.

NASA has assigned astronaut Kate Rubins to a six-month mission to the International Space Station as a flight engineer and member of the Expedition 63/64 crew.

Rubins, along with cosmonauts Sergey Ryzhikov and Sergey Kud-Sverchkov of the Russian space agency Roscosmos, are scheduled to launch Oct. 14 on the Soyuz MS-17 spacecraft from the Baikonur Cosmodrome in Kazakhstan.

Among some of the hundreds of experiments ongoing during her mission, Rubins will conduct research using the Cold Atom Lab to study the use of laser-cooled atoms for future quantum sensors, and will work on a cardiovascular experiment that builds on an investigation she completed during her previous mission.

NASA selected Rubins as an astronaut in 2009, and she completed her first spaceflight in 2016 as an Expedition 48/49crew member. She launched July 6, 2016, and spent 115 days in space, during which she conducted two spacewalks totaling 12 hours and 46 minutes before her return to Earth Oct. 29, 2016. During her stay on the space station, Rubins helped advance important science and research and became the first person to sequence DNA in space.

Born in Farmington, Connecticut, and raised in Napa, California, Rubins received a Bachelor of Science degree in molecular biology from the University of California, San Diego, in 1999 and a doctorate in cancer biology in 2005 from Stanford University School of Medicine’s Department of Biochemistry and Department of Microbiology and Immunology in Palo Alto, California. Before joining NASA, Rubins worked as a fellow/principal investigator at the Whitehead Institute for Biomedical Research in Cambridge and headed 14 researchers studying viral diseases that primarily affect Central and West Africa.

For nearly 20 years, astronauts have continuously lived and worked on the space station, testing technologies, performing science and developing the skills needed to explore farther from Earth. As a global endeavor, 239 people from 19 countries have visited the unique microgravity laboratory that has hosted more than 2,800 research investigations from researchers in 108 countries. Through NASA’s Artemis program, the agency will send astronauts to the Moon by 2024, with eventual human exploration of Mars. Inspiring the next generation of explorers – the Artemis Generation – ensures America will continue to lead in space exploration and discovery.