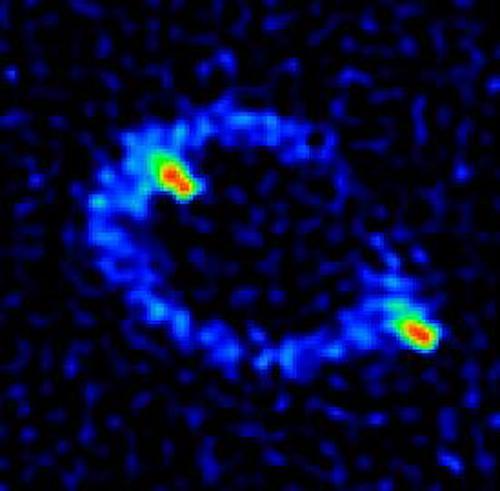 Maunakea, Hawaii – Determined to find a needle in a cosmic haystack, a pair of astronomers time traveled through archives of old data from W. M. Keck Observatory on Mauankea in Hawaii and old X-ray data from NASA’s Chandra X-ray Observatory to unlock a mystery surrounding a bright, lensed, heavily obscured quasar.

This celestial object, which is an active galaxy emitting enormous amounts of energy due to a black hole devouring material, is an exciting object in itself. Finding one that is gravitationally lensed, making it appear brighter and larger, is exceptionally exciting. While slightly over 200 lensed unobscured quasars are currently known, the number of lensed obscured quasars discovered is in the single digits. This is because the feeding black hole stirs up gas and dust, cloaking the quasar and making it difficult to detect in visible light surveys.

Not only did the researchers uncover a quasar of this type, they found the object happens to be the first discovered Einstein ring, named MG 1131+0456, which was observed in 1987 with the Very Large Array network of radio telescopes in New Mexico. Remarkably, though widely studied, the quasar’s distance or redshift remained a question mark.

“As we dug deeper, we were surprised that such a famous and bright source never had a distance measured for it,” said Daniel Stern, senior research scientist at NASA’s Jet Propulsion Laboratory and author of the study. “Having a distance is a necessary first step for all sorts of additional studies, such as using the lens as a tool to measure the expansion history of the universe and as a probe for dark matter.”

Stern and co-author Dominic Walton, an STFC Ernest Rutherford Fellow at the University of Cambridge’s Institute of Astronomy (UK), are the first to calculate the quasar’s distance, which is 10 billion light-years away (or a redshift of z = 1.849).

The result is published in the June 1 issue of The Astrophysical Journal Letters.

“This whole paper was a bit nostalgic for me, making me look at papers from the early days of my career, when I was still in graduate school. The Berlin Wall was still up when this Einstein ring was first discovered, and all the data presented in our paper are from the last millennium,” said Stern.

At the time of their research, telescopes around the planet were shuttered due to the coronavirus pandemic (Keck Observatory has since reopened as of May 16); Stern and Walton took advantage of their extended time at home to creatively keep science going by combing through data from NASA’s Wide-field Infrared Survey Explorer (WISE) to search for gravitationally lensed, heavily obscured quasars. While dust hides most active galaxies in visible light surveys, that obscuring dust makes such sources very bright in infrared surveys, such as provided by WISE.

Though quasars are often extremely far away, astronomers can detect them through gravitational lensing, a phenomenon that acts as nature’s magnifying glass. This occurs when a galaxy closer to Earth acts as a lens and makes the quasar behind it look extra bright. The gravitational field of the closer galaxy warps space itself, bending and amplifying the light of the quasar in the background. If the alignment is just right, this creates a circle of light called an Einstein ring, predicted by Albert Einstein in 1936.  More typically, gravitationally lensing will cause multiple images of the background object to appear around the foreground object. 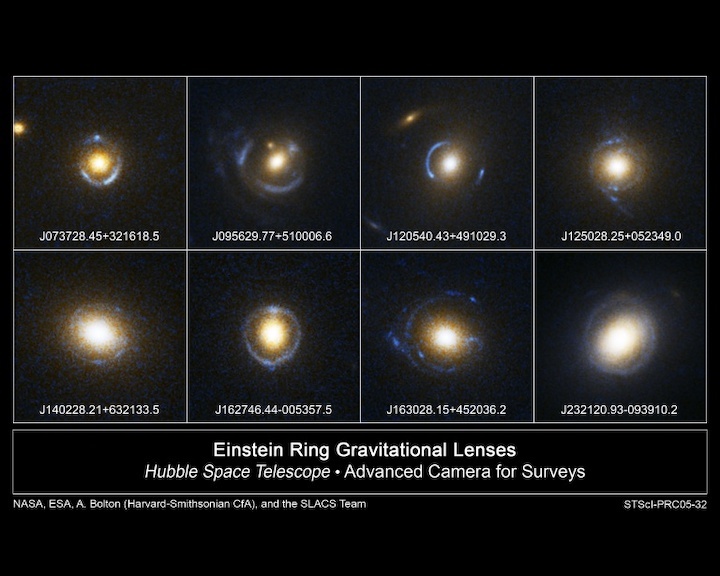 Once Stern and Walton rediscovered MG 1131+0456 with WISE and realized its distance remained a mystery, they meticulously combed through old data from the Keck Observatory Archive (KOA) and found the Observatory observed the quasar seven times between 1997 and 2007 using the Low Resolution Imaging Spectrometer (LRIS) on the Keck I telescope, as well as the Near-Infrared Spectrograph (NIRSPEC) and the Echellette Spectrograph and Imager (ESI) on the Keck II telescope.

“We were able to extract the distance from Keck’s earliest data set, taken in March of 1997, in the early years of the observatory,” said Walton. “We are grateful to Keck and NASA for their collaborative efforts to make more than 25 years of Keck data publicly available to the world. Our paper would not have been possible without that.”

The team also analyzed NASA’s archival data from the Chandra X-ray Observatory in 2000, in the first year after the mission launched.

With MG 1131+0456’s distance now known, Walton and Stern were able to determine the mass of the lensed galaxy with exquisite precision and use the Chandra data to robustly confirm the obscured nature of the quasar, accurately determining how much intervening gas lies between us and its luminous central regions.

“We can now fully describe the unique, fortuitous geometry of this Einstein ring,” said Stern. “This allows us to craft follow-up studies, such as using the soon-to-launch James Webb Space Telescope to study the dark matter properties of the lensing galaxy.”

“Our next step is to find lensed quasars that are even more heavily obscured than MG 1131+0456,” said Walton. “Finding those needles is going to be even harder, but they’re out there waiting to be discovered. These cosmic gems can give us a deeper understanding of the universe, including further insight into how supermassive black holes grow and influence their surroundings,” says Walton. The Low Resolution Imaging Spectrometer (LRIS) is a very versatile and ultra-sensitive visible-wavelength imager and spectrograph built at the California Institute of Technology by a team led by Prof. Bev Oke and Prof. Judy Cohen and commissioned in 1993. Since then it has seen two major upgrades to further enhance its capabilities: the addition of a second, blue arm optimized for shorter wavelengths of light and the installation of detectors that are much more sensitive at the longest (red) wavelengths. Each arm is optimized for the wavelengths it covers. This large range of wavelength coverage, combined with the instrument’s high sensitivity, allows the study of everything from comets (which have interesting features in the ultraviolet part of the spectrum), to the blue light from star formation, to the red light of very distant objects. LRIS also records the spectra of up to 50 objects simultaneously, especially useful for studies of clusters of galaxies in the most distant reaches, and earliest times, of the universe.  LRIS was used in observing distant supernovae by astronomers who received the Nobel Prize in Physics in 2011 for research determining that the universe was speeding up in its expansion.

The Near-Infrared Spectrograph (NIRSPEC) is a unique, cross-dispersed echelle spectrograph that captures spectra of objects over a large range of infrared wavelengths at high spectral resolution. Built at the UCLA Infrared Laboratory by a team led by Prof. Ian McLean, the instrument is used for radial velocity studies of cool stars, abundance measurements of stars and their environs, planetary science, and many other scientific programs. A second mode provides low spectral resolution but high sensitivity and is popular for studies of distant galaxies and very cool low-mass stars. NIRSPEC can also be used with Keck II’s adaptive optics (AO) system to combine the powers of the high spatial resolution of AO with the high spectral resolution of NIRSPEC. Support for this project was provided by the Heising-Simons Foundation.

The Echellette Spectrograph and Imager (ESI) is a medium-resolution visible-light spectrograph that records spectra from 0.39 to 1.1 microns in each exposure. Built at UCO/Lick Observatory by a team led by Prof. Joe Miller, ESI also has a low-resolution mode and can image in a 2 x 8 arc min field of view. An upgrade provided an integral field unit that can provide spectra everywhere across a small, 5.7 x4.0 arc sec field. Astronomers have found a number of uses for ESI, from observing the cosmological effects of weak gravitational lensing to searching for the most metal-poor stars in our galaxy.

The Keck Observatory Archive (KOA) is a collaboration between the NASA Exoplanet Science Institute (NExScI) and the W. M. Keck Observatory (WMKO). NExScI is sponsored by NASA’s Exoplanet Exploration Program, and operated by the California Institute of Technology in coordination with the Jet Propulsion Laboratory (JPL).

The W. M. Keck Observatory telescopes are among the most scientifically productive on Earth. The two 10-meter optical/infrared telescopes on the summit of Maunakea on the Island of Hawaii feature a suite of advanced instruments including imagers, multi-object spectrographs, high-resolution spectrographs, integral-field spectrometers, and world-leading laser guide star adaptive optics systems.