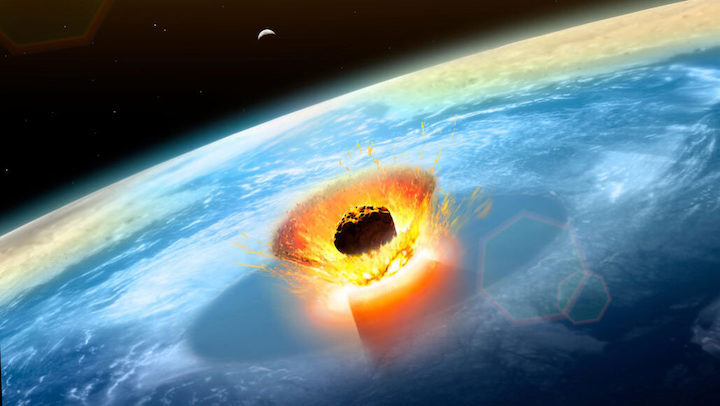 About 66 million years ago, an asteroid slammed into Earth at what is now Chicxulub, on Mexico’s Yucatán peninsula (illustrated). In addition to triggering a mass extinction, the impact sent superheated water cycling deep into the crust.

The asteroid that slammed into Earth 66 million years ago left behind more than a legacy of mass destruction. That impact also sent superheated seawater swirling through the crust below for more than a million years, chemically overhauling the rocks. Similar transformative hydrothermal systems, left in the wake of powerful impacts much earlier in Earth’s history, may have been a crucible for early microbial life on Earth, researchers report May 29 in Science Advances.

The massive Chicxulub crater on Mexico’s Yucatán peninsula is the fingerprint of a killer, probably responsible for the destruction of more than 75 percent of life on Earth, including all nonbird dinosaurs (SN: 1/25/17). In 2016, a team of scientists made a historic trek to the partially submerged crater, drilling deep into the rock to study the crime scene from numerous angles.

One of those researchers was planetary scientist David Kring of the Lunar and Planetary Institute in Houston. A dozen years earlier, Kring had found evidence at Chicxulub that the layers of rock bearing the signs of impact — telltale features such as shocked quartz and melted spherules — were subsequently cut through by veins of newer minerals such as quartz and anhydrite. Such veins, Kring thought, suggest that hot hydrothermal fluids had been circulating beneath Chicxulub some time after the impact.

Hydrothermal systems can occur where Earth is tectonically active, such as where tectonic plates pull the seafloor apart, or where mantle plumes like the one beneath Yellowstone rise up into the crust. The molten rock rising through the crust in these regions superheats water already circulating within the crust.

But the Yucatán peninsula is tectonically quiescent, and has been for 66 million years, Kring says. So, as part of the International Ocean Discovery Program’s Expedition 364 to Chicxulub, he and colleagues drilled 1,335 meters below the ring of the crater, retrieving long cores of sediment and rock.

The team then analyzed the minerals found in the cores. “It was immediately obvious that they had been hydrothermally altered. It was pervasive and apparent,” Kring says. The intense heat of the circulating seawater caused chemical reactions within the rock, transforming some minerals into others. By identifying the different types of minerals, the team determined that the initial temperature of the fluids was more than 300° Celsius, later cooling to about 90° C.

The chemically altered rocks beneath the crater extended down about four or five kilometers below the crater’s peak ring, a circular, mountainous region within the vast crater. The hydrothermally altered zone covers a volume more than nine times that of the Yellowstone Caldera system, Kring says. Paleomagnetic data suggest that the hydrothermal system lasted for more than a million years.

Those conditions, the researchers say, may have also been capable of fostering life akin to the extremophiles that thrive in Yellowstone’s boiling pools. In addition to the metal-rich fluids that could provide an energy source for microbes, the Chicxulub cores revealed that the rocks were both porous and permeable — in other words, filled with interconnected nooks and crannies that could have been cozy shelters for microbes.

Kring has previously suggested that the very same destructive impacts that annihilate life may also create appealing habitats — not just on Earth, but potentially on other planetary bodies such as Mars. Even more tantalizing is the possibility that hydrothermal systems, engendered beneath ancient impacts, may have been where life on Earth began (SN: 3/1/13).

Evidence from lunar craters suggests that Earth was heavily bombarded by asteroids about 3.9 billion years ago (SN: 10/18/04). Most of those more ancient craters on Earth have long since vanished or been altered by the constant tectonic recycling of Earth’s surface (SN: 12/18/18). So the hydrothermal system beneath Chicxulub offers a window into what such systems might have actually looked like much deeper in the past, says geophysicist Norman Sleep of Stanford University, who was not involved in the study. “It shows the reality of the process,” Sleep says.

The new study may set the stage for the possibility of life thriving beneath an impact. But whether a microbial cast of characters was actually present beneath Chicxulub is a question for future studies, Kring says.

“Let me be clear: This paper has no evidence of microbial life,” Kring says. “We just have all the properties of hydrothermal systems that do support life elsewhere on Earth.”

Ancient environments that provided water, chemical building blocks and energy “are very promising candidates for hosting [life’s] origins and early evolution,” says NASA astrobiologist David Des Marais, who was not involved in the study. Impact-generated hydrothermal systems aren’t the only such environments; researchers have also made a compelling case for hot springs, Des Marais says.

That’s an ongoing debate, he notes, adding “I consider hydrothermal systems to be highly promising exploration targets for astrobiology.”