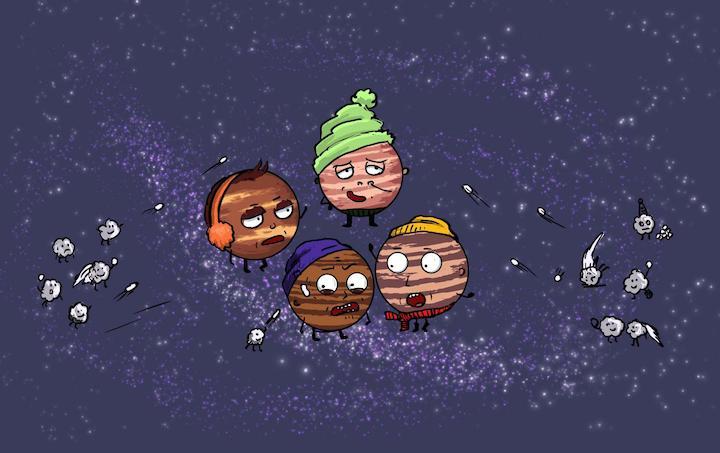 The planetary system around star HR8799 is remarkably similar to our Solar System. A research team led by astronomers from the University of Groningen and SRON Netherlands Institute for Space Research has used this similarity to model the delivery of materials by asteroids, comets and other minor bodies within the system. Their simulation shows that the four gas planets receive material delivered by minor bodies, just like in our Solar System. The results were published by the journal Astronomy & Astrophysics on 29 May.

Counting outwards from the Sun, our Solar System consists of four rocky planets, an asteroid belt, four gas giants and another asteroid belt. The inner planets are rich in refractory materials such as metals and silicates, the outer planets are rich in volatiles such as water and methane. While forming, the inner planets had a hard time collecting a volatile atmosphere because the strong solar wind kept blowing the gas away. At the same time, the heat from the Sun evaporated any ice clumps, so it was harder to retain water. In the outer regions, there was less solar heat and wind, so the eventual gas giants could collect water ice and also gather large atmospheres filled with volatiles.

Minor bodies, including asteroids, comets and dust, fine-tuned this outcome later on by delivering refractories from the inner belt and both volatiles and refractories from the outer belt. A research team led by astronomers from the University of Groningen and SRON Netherlands Institute for Space Research wondered if the same delivery system applies to planetary systems around other stars. They created a simulation for the system around HR8799, which is similar to our Solar System with four gas giants plus an inner and outer belt, and possibly rocky planets inside the inner belt. Therefore the team could take some unknowns about HR8799 from our own Solar System.

The simulation shows that just like in our Solar System, the four gas planets receive material delivered by minor bodies. The team predicts a total delivery of both material types of around half a millionth of the planets' masses. Future observations, for example by NASA's James Webb Space Telescope, will be able to measure the amount of refractories in the volatile-rich gas giants. 'If telescopes detect the predicted amount of refractories, it means that these can be explained by delivery from the belts as shown in the model', explains Kateryna Frantseva, first author of the paper. 'However, if they detect more refractories than predicted, the delivery process is more active than was assumed in the model, for example, because HR8799 is much younger than the Solar System. The HR8799 system may contain terrestrial planets, for which volatile delivery from the asteroid belts may be of astrobiological relevance.'