It isn’t an alien spaceship, but new research suggests the first known interstellar object to grace our solar system could be something even stranger. 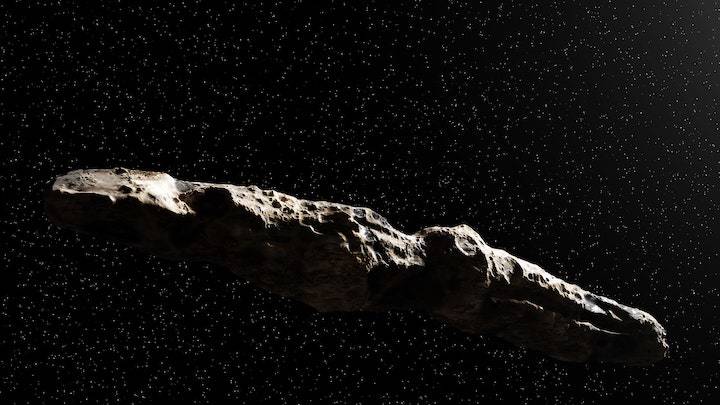 EVER SINCE ‘OUMUAMUA was discovered in 2017, the first interstellar object detected in our solar system has been a source of endless intrigue for astronomers. The giant hunk of space rock has an unusual cigar shape, is tumbling end over end, and isn’t easily classified as a comet or an asteroid. The uncertainties about this interstellar interloper have resulted in a proliferation of theories about its provenance and composition. There’s been speculation that it’s a cosmic dust bunny, an alien spaceship, or the remnants of a small planet torn asunder by its host star.

This week, two Yale astrophysicists put forth a new theory arguing that ‘Oumuamua has the makings of an interstellar iceberg. The research, recently published as a preprint and accepted for publication in Astrophysical Journal Letters, traces ‘Oumuamua’s origins to a giant molecular cloud. These ghostly objects are massive stellar nurseries that can stretch for light years and contain enough gas to form tens of thousands of stars. But according to the new research, they might also spit out hydrogen icebergs that look and behave a lot like ‘Oumuamua.

“Even though the hydrogen iceberg thing is a little exotic, it explains every single mysterious thing about ‘Oumuamua,” says Darryl Seligman, an incoming postdoctoral researcher at the University of Chicago who coauthored the paper with astrophysicist Gregory Laughlin, his PhD adviser at Yale. If Seligman and Laughlin are right, ‘Oumuamua would not only be the first interstellar object discovered, but the first hydrogen iceberg, too.

Hydrogen typically exists as a gas and is the stuff that fuels the fusion process in stars like our sun. But if it gets cold enough, hydrogen can solidify. The only known regions of the universe frigid enough to cause this phase transition are the dense, icy hearts of giant molecular clouds. “There’s not much work on hydrogen ice, because its sublimation temperature is so low,” says Seligman, referring to the point at which a solid transitions directly into a gas. He says that hydrogen freezes at around -450 degrees Fahrenheit, just a few degrees above absolute zero.

The core of a giant molecular cloud has a relatively short lifespan of just a few hundred thousand years. Over time, it gets eroded by the churn of the galaxy until it disappears. But according to the hydrogen iceberg theory, during the core’s brief existence, frozen hydrogen molecules latch on to dust in the cloud to build up a large block of ice. It’s a painstakingly slow process; after a few hundred thousand years it would produce an iceberg only a few hundred of meters across. This is squarely in the ballpark for an object like ‘Oumuamua, which NASA researchers calculated to be less than 800 meters long.

The iceberg theory can also explain ‘Oumuamua’s weird cigar shape. After the core of the giant molecular cloud dissipates and the iceberg is set adrift in the void, it is constantly bombarded by cosmic radiation. The radiation would chip away at the iceberg from some directions more than others, which would result in a more elongated form. Seligman compares it to a bar of soap, which becomes more flat and oval as it is used.

But the reason Seligman is most excited about the hydrogen iceberg theory is because it can explain why ‘Oumuamua began speeding up as it entered the solar system, which couldn’t be explained by the tug of gravity alone. A leading theory advanced by several different astronomers argued that ‘Oumuamua was propelled by gases rapidly boiling off of space rocks, a phenomenon known as outgassing. This is what gives a comet its brilliant tail, which is typically composed of compounds like carbon dioxide and water. But when astronomers observed ‘Oumuamua, they didn’t detect outgassing that would explain the object’s acceleration—unless, of course, it was spitting out pure hydrogen, which couldn’t be detected by the telescopes conducting the observations.

Seligman and Laughlin’s theory is a tantalizing explanation that covers ‘Oumuamua’s most mysterious features. But it also conjures an entirely new type of astrophysical object—a hydrogen iceberg—that has never been observed before and barely even theorized. Seligman says one of the only references to something like it is in an astronomy paper from the 1990s, which theorized that solid hydrogen could explain dark matter.

As far as physics is concerned, there’s no reason hydrogen icebergs can’t exist—and they do seem to explain a lot about ‘Oumuamua, says Matthew Knight, an astronomer at the Naval Academy who has previously researched the interstellar object. “We’ve been having trouble with the elongated shape and the energetics of how you get the acceleration, which hasn’t been covered much in the literature,” Knight says. “They do an excellent job of comprehensively explaining what could be going on.”

Still, extraordinary claims require extraordinary evidence, and we may never know for sure if ‘Oumuamua is in fact a block of hydrogen ice. The interstellar object is sprinting out of the solar system at 70,000 miles per hour and impossible to observe, short of launching an interstellar mission to intercept it.

But there may be another chance to observe another like it. Many astronomers think that interstellar objects may be passing through our solar system on a regular basis, and next-generation telescopes like Chile’s Large Synoptic Survey Telescope will be well-equipped to detect them long before they make their departure. This would give astronomers plenty of time to test theories about what these objects are made of and how they were formed. Seligman says that if the iceberg theory is correct, astronomers would expect to see these objects change shape as they move through the solar system. The most drastic change would occur during the object’s closest approach to the sun when it rapidly boils off its hydrogen.

“This idea hits a lot of things we’ve had trouble explaining in a comprehensive way and opens up new investigations that ought to be done when new interstellar objects are discovered,” says Knight. “It would be a really exciting result if we could prove that it really was made out of hydrogen ice.”