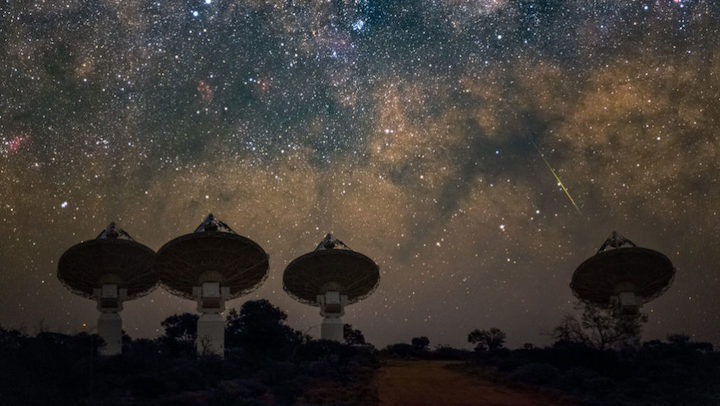 Observations of brief, brilliant flashes of radio waves from other galaxies, detected by the Australian Square Kilometre Array Pathfinder (pictured), indicate that all of the universe’s “missing matter” is lurking in intergalactic space.

At long last, all of the universe’s ordinary matter seems to be present and accounted for.

Astronomers have taken a new census of matter in the universe by examining how bright flashes of radio waves from other galaxies, called fast radio bursts, are distorted by particles on their way to Earth. This analysis shows that about half of the universe’s ordinary matter, which has eluded detection for decades, is lurking in intergalactic space, researchers report online May 27 in Nature.

The mystery of the missing matter has vexed cosmologists for some 20 years. This elusive material isn’t the invisible, unidentified dark matter that makes up most of the mass in the universe. It’s ordinary matter, composed of garden-variety particles called baryons, such as protons and neutrons (SN: 10/11/17).

Observations of light emitted when the universe was young indicate that baryons should make up roughly 5 percent of all the mass and energy in the cosmos. But in the modern universe, all the matter that astronomers can easily see, like the stars and gas in galaxies, adds up to only about half of the expected amount of matter.

Scientists have long suspected the missing matter is hiding between galaxies, along filaments of gas strung between galaxy clusters in a vast cosmic web (SN: 1/20/14). “But we haven’t been able to detect it very well, because it’s really, really diffuse, and it’s not shining brightly,” says Jason Hessels, an astrophysicist at the University of Amsterdam not involved in the new work.

Some intergalactic matter is detectable by how it absorbs the light of distant, bright objects called quasars (SN: 10/25/02). But the only way to take inventory all of the baryons hanging out in intergalactic space relies on mysterious blasts of radio waves from other galaxies, possibly generated by energetic activity around neutron stars or black holes (SN: 2/7/20).

Even though no one knows what causes these blasts, called fast radio bursts or FRBs, they can make useful baryon detectors (SN: 7/25/14). A burst’s high-frequency, high-energy radio waves zip through intergalactic matter faster than its low-frequency waves. The more intergalactic matter that a radio burst’s waves pass through, the farther its lower-frequency waves fall behind — creating a detectable smear in the radio signal by the time it reaches Earth.

Astrophysicist J. Xavier Prochaska of the University of California, Santa Cruz and colleagues examined five fast radio bursts from five galaxies, all detected by the Australian Square Kilometre Array Pathfinder (SN: 6/27/19). For each FRB, the researchers compared the arrival times of radio waves of different frequencies to tally up the number of baryons that the burst encountered on its journey through intergalactic space. Then, using the distance between the FRB’s host galaxy and the Milky Way, Prochaska’s team could calculate the baryon density along that path.

The average density of matter between the Milky Way and each of the five FRB host galaxies came out to about one baryon per cubic meter. The material in the Milky Way is about 1 million times as dense as that, Prochaska says, making the intergalactic stuff “a very wispy medium.” But all that wispy material, taken together, is enough to account for all the universe’s missing matter — bringing ordinary matter up to about 5 percent of the modern universe’s overall matter and energy, the researchers say.

Astrophysicist J. Michael Shull of the University of Colorado Boulder cautions that “five is an awfully small number” of FRB observations from which to draw conclusions about the number of baryons throughout the modern universe. But “once they get their error bars beaten down with many, many more bursts … I think that will really be the nail in the coffin on this baryon problem,” he says.

Using more fast radio bursts as cosmic weigh stations will also be useful for pinpointing exactly where all the matter in the universe is located, says Shami Chatterjee, a radio astronomer at Cornell University not involved in the work.

Right now, all the researchers can say about the lost-and-found matter is that it’s between galaxies. But with thousands of FRB observations, astronomers could start teasing out the slight variations in baryon density along the sight lines between the Milky Way and other galaxies to map out the cosmic web, Chatterjee says.