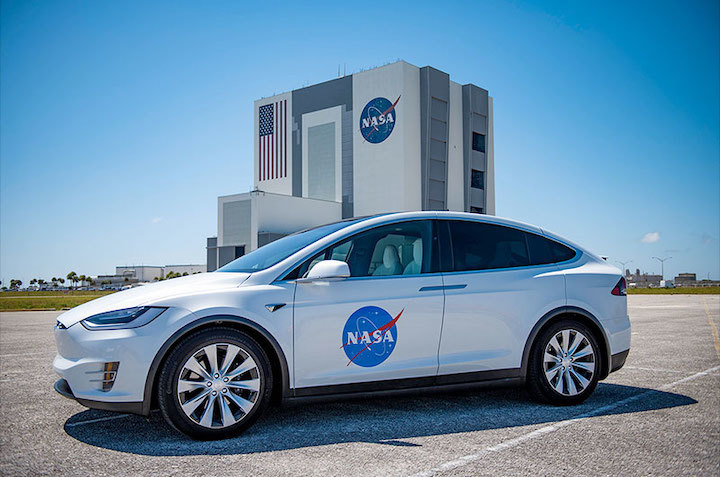 The first NASA astronauts to launch atop a Falcon 9 rocket will have more than one new ride designed by SpaceX CEO Elon Musk.

Bob Behnken and Doug Hurley, who will be the first to fly on a SpaceX Dragon to the International Space Station, will arrive at their launchpad in a Tesla Model X SUV. In addition to helming the commercial spaceflight company, Musk also leads the electric car company.

NASA revealed the SpaceX Model X on Wednesday (May 13), two weeks before the scheduled May 27 launch.

"Here's some Tesla news that everyone should love," NASA Administrator Jim Bridenstine posted on Twitter. "Check out the Model X that will carry Bob Behnken and Doug Hurley to the launchpad for the Demo-2 mission!"

The white SUV features decals of NASA's red, white and blue insignia, dubbed the "meatball," on its two front doors and the agency's resurrected logotype, the red "worm," across the top of its rear window. The Demo-2 Falcon 9 rocket will also be emblazoned with both NASA identifiers.

About three hours before launch, after donning their spacesuits, Behnken and Hurley will walk out of NASA's Neil A. Armstrong Operations and Checkout (O&C) Building at the Kennedy Space Center in Florida and climb into the backseat of the Model X through the car's falcon-wing rear doors. The all-electric SUV will then be used to drive them the 9 miles (14 kilometers) to Launch Complex 39A.

The drive will mark the first time that NASA astronauts have taken a car to the launchpad to then leave Earth.

The original U.S. spacemen, the Mercury 7 astronauts, were transferred from a hangar to their waiting Redstone or Atlas rockets using a modified trailer pulled by a Reo Motor Company tractor. The Gemini astronauts suited up in a trailer near the launchpad and then rode a transfer van the short way to their Titan boosters.

The Apollo program introduced the first "Astrovan," in the form of a converted Clark Cortez motorhome. The white vehicle with a blue and red stripe and a large NASA "meatball" logo was used by moon-bound crews from 1968 through 1972, and then continued in service for the Skylab, Apollo-Soyuz and early space shuttle missions.

A new Astrovan was introduced in November 1983, with the ninth space shuttle mission. The modified Airstream Excella Motorhome sported a chrome body with a red, white and blue stripe, a large NASA meatball and enough room on board to accommodate the larger shuttle crews.

NASA's other commercial crew partner, the Boeing Company, also worked with Airstream to create the Astrovan II, a customized Airstream Atlas Touring Coach. Revealed in 2019, the new van is wrapped with graphics depicting the Boeing Starliner spacecraft that the van's riders will launch aboard to the space station.

SpaceX's Tesla Model X was previously seen in January, without its newly-applied NASA insignia decals, when it was used to drive Behnken and Hurley for a launch-day dress rehearsal.

The official use of the "meatball" and "worm" on the same vehicle marks a return to NASA's early-1980s livery. Since then, the space agency's rules for the retro logotype, if permitted at all, was that it never appear together with the insignia. 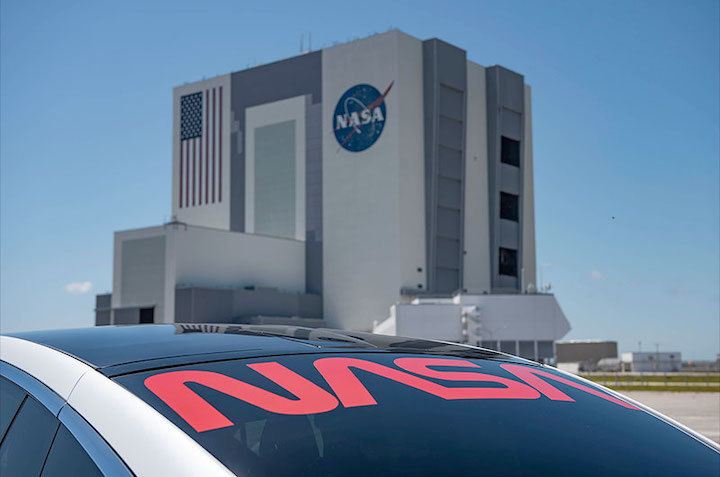