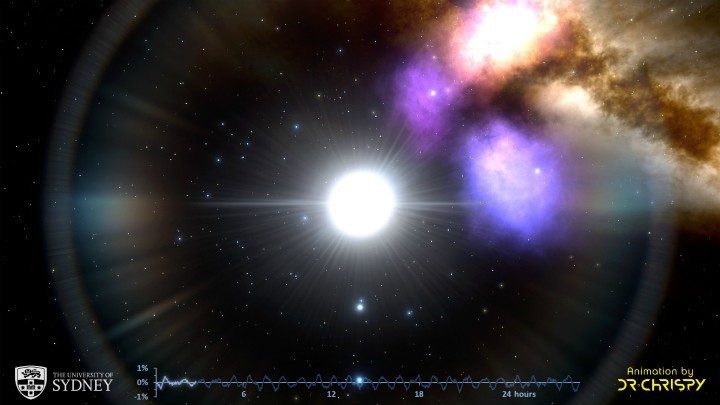 The key to unlocking the secrets of a large group of pulsating stars has been discovered by an international team of astrophysicists.

Pulsations are a common feature of stars. They are natural resonances, formed by trapped waves like those in musical instrument, and provide a unique way to look inside stars. Studies that use pulsations – the field of asteroseismology – allow us to test models of stellar evolution, and have been extremely successful on a range of different classes of stars.

In one class of stars, however, scientists have been frustrated in their attempts to use astroseismology. The so-called delta (δ) Scuti stars present seemingly random spectra of pulsation overtones, making it very hard to interpret the pulsations to glean clues about their internal structures.

In a new study, by a team including researchers at the University of Birmingham, UK, and the University of Sydney, Australia, a subset of this class has been found that shows much simpler, ordered and understandable pulsation spectra. The discovery was made using data from the NASA Transiting Exoplanet Survey Satellite (TESS), and the NASA Kepler Mission. The ordered spectra offer the potential to unlock a treasure trove of information on this important group of stars. The study is published today in Nature.

“Asteroseismology is the method we use to reveal the usually hidden interiors of stars,” explains co-author Dr Tanda Li of the School of Physics and Astronomy at Birmingham. “Asteroseismology has yielded a wealth of fascinating insights on many types of stars, including the Sun, but until now the random spectra of delta-Scutis has limited our ability to use pulsations to tell us about these stars.”

The new subset of stars tend to be younger than their seemingly random cousins. Birmingham co-author Dr Warrick Ball says: “This fits the picture in which we know pulsation spectra tend to get more complicated as stars age. The youngest stars therefore give us our best shot at finding ordered spectra”.

Professor Bill Chaplin, who leads the research group working on asteroseismology at Birmingham, added: “We are now in a position to start to probe these stars, and to use them as benchmarks to help us interpret the huge numbers of other stars in the group that present more complicated pulsation spectra.”