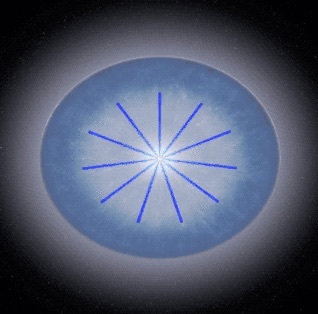 Astronomers have detected elusive pulsation patterns in dozens of young, rapidly rotating stars thanks to data from NASA’s Transiting Exoplanet Survey Satellite (TESS). The discovery will revolutionize scientists’ ability to study details like the ages, sizes and compositions of these stars — all members of a class named for the prototype, the bright star Delta Scuti.

“Delta Scuti stars clearly pulsate in interesting ways, but the patterns of those pulsations have so far defied understanding,” said Tim Bedding, a professor of astronomy at the University of Sydney. “To use a musical analogy, many stars pulsate along simple chords, but Delta Scuti stars are complex, with notes that seem to be jumbled. TESS has shown us that’s not true for all of them.”

A paper describing the findings, led by Bedding, appears in the May 14 issue of the journal Nature and is now available online.

Watch the pulsations of a Delta Scuti star! In this illustration, the star changes in brightness when internal sound waves at different frequencies cause parts of the star to expand and contract. In one pattern, the whole star expands and contracts, while in a second, opposite hemispheres swell and shrink out of sync. In reality, a single star exhibits many pulsation patterns that can tell astronomers about its age, composition and internal structure. The exact light variations astronomers observe also depend on how the star's spin axis angles toward us. Delta Scuti stars spin so rapidly they flatten into ovals, which jumbles these signals and makes them harder to decode. Now, thanks to NASA's Transiting Exoplanet Survey Satellite, astronomers are deciphering some of them.
Credits: NASA's Goddard Space Flight Center
Download this video in HD formats from NASA Goddard's Scientific Visualization Studio

Geologists studying seismic waves from earthquakes figured out Earth’s internal structure from the way the reverberations changed speed and direction as they traveled through it. Astronomers apply the same principle to study the interiors of stars through their pulsations, a field called asteroseismology.

Sound waves travel through a star’s interior at speeds that change with depth, and they all combine into pulsation patterns at the star’s surface. Astronomers can detect these patterns as tiny fluctuations in brightness and use them to determine the star’s age, temperature, composition, internal structure and other properties.

Sound waves bouncing around inside a star cause it to expand and contract, which results in detectable brightness changes. This animation depicts one type of Delta Scuti pulsation — called a radial mode — that is driven by waves (blue arrows) traveling between the star’s core and surface. In reality, a star may pulsate in many different modes, creating complicated patterns that enable scientists to learn about its interior.
Credits: NASA's Goddard Space Flight Center

Delta Scuti stars are between 1.5 and 2.5 times the Sun’s mass. They’re named after Delta Scuti, a star visible to the human eye in the southern constellation Scutum that was first identified as variable in 1900. Since then, astronomers have identified thousands more like Delta Scuti, many with NASA’s Kepler space telescope, another planet-hunting mission that operated from 2009 to 2018.

But scientists have had trouble interpreting Delta Scuti pulsations. These stars generally rotate once or twice a day, at least a dozen times faster than the Sun. The rapid rotation flattens the stars at their poles and jumbles the pulsation patterns, making them more complicated and difficult to decipher.

To determine if order exists in Delta Scuti stars’ apparently chaotic pulsations, astronomers needed to observe a large set of stars multiple times with rapid sampling. TESS monitors large swaths of the sky for 27 days at a time, taking one full image every 30 minutes with each of its four cameras. This observing strategy allows TESS to track changes in stellar brightness caused by planets passing in front of their stars, which is its primary mission, but half-hour exposures are too long to catch the patterns of the more rapidly pulsating Delta Scuti stars. Those changes can happen in minutes.

But TESS also captures snapshots of a few thousand pre-selected stars — including some Delta Scuti stars — every two minutes. When Bedding and his colleagues began sorting through the measurements, they found a subset of Delta Scuti stars with regular pulsation patterns. Once they knew what to look for, they searched for other examples in data from Kepler, which used a similar observing strategy. They also conducted follow-up observations with ground-based telescopes, including one at the W.M. Keck Observatory in Hawaii and two in the global Las Cumbres Observatory network. In total, they identified a batch of 60 Delta Scuti stars with clear patterns.

“This really is a breakthrough. Now we have a regular series of pulsations for these stars that we can understand and compare with models,” said co-author Simon Murphy, a postdoctoral researcher at the University of Sydney. “It’s going to allow us to measure these stars using asteroseismology in a way that we’ve never been able to do. But it’s also shown us that this is just a stepping-stone in our understanding of Delta Scuti stars.”

Pulsations in the well-behaved Delta Scuti group fall into two major categories, both caused by energy being stored and released in the star. Some occur as the whole star expands and contracts symmetrically. Others occur as opposite hemispheres alternatively expand and contract. Bedding’s team inferred the alterations by studying each star’s fluctuations in brightness.

The data have already helped settle a debate over the age of one star, called HD 31901, a member of a recently discovered stream of stars orbiting within our galaxy. Scientists placed the age of the overall stream at 1 billion years, based on the age of a red giant they suspected belonged to the same group. A later estimate, based on the rotation periods of other members of the stellar stream, suggested an age of only about 120 million years. Bedding’s team used the TESS observations to create an asteroseismic model of HD 31901 that supports the younger age.

Hear the rapid beat of HD 31901, a Delta Scuti star in the southern constellation Lepus. The sound is the result of 55 pulsation patterns TESS observed over 27 days sped up by 54,000 times. Delta Scuti stars have long been known for their apparently random pulsations, but TESS data show that some, like HD 31901, have more orderly patterns.
Credits: NASA's Goddard Space Flight Center and Simon Murphy, University of Sydney
Download this video in HD formats from NASA Goddard's Scientific Visualization Studio

"Delta Scuti stars have been frustrating targets because of their complicated oscillations, so this is a very exciting discovery," said Sarbani Basu, a professor of astronomy at Yale University in New Haven, Connecticut, who studies asteroseismology but was not involved in the study. "Being able to find simple patterns and identify the modes of oscillation is game changing. Since this subset of stars allows normal seismic analyses, we will finally be able to characterize them properly."

The team thinks their set of 60 stars has clear patterns because they’re younger than other Delta Scuti stars, having only recently settled into producing all of their energy through nuclear fusion in their cores. The pulsations occur more rapidly in the fledgling stars. As the stars age, the frequency of the pulsations slows, and they become jumbled with other signals.

Another factor may be TESS’s viewing angle. Theoretical calculations predict that a spinning star’s pulsation patterns should be simpler when its rotational pole faces us instead of its equator. The team’s TESS data set included around 1,000 Delta Scuti stars, which means that some of them, by chance, must be viewed close to pole-on.

Scientists will continue to develop their models as TESS begins taking full images every 10 minutes instead of every half hour in July. Bedding said the new observing strategy will help capture the pulsations of even more Delta Scuti stars.

“We knew when we designed TESS that, in addition to finding many exciting new exoplanets, the satellite would also advance the field of asteroseismology,” said TESS Principal Investigator George Ricker at the Massachusetts Institute of Technology’s Kavli Institute for Astrophysics and Space Research in Cambridge. “The mission has already found a new type of star that pulsates on one side only and has unearthed new facts about well-known stars. As we complete the initial two-year mission and commence the extended mission, we’re looking forward to a wealth of new stellar discoveries TESS will make.”

TESS is a NASA Astrophysics Explorer mission led and operated by MIT in Cambridge, Massachusetts, and managed by NASA's Goddard Space Flight Center. Additional partners include Northrop Grumman, based in Falls Church, Virginia; NASA’s Ames Research Center in California’s Silicon Valley; the Harvard-Smithsonian Center for Astrophysics in Cambridge, Massachusetts; MIT’s Lincoln Laboratory; and the Space Telescope Science Institute in Baltimore. More than a dozen universities, research institutes and observatories worldwide are participants in the mission.