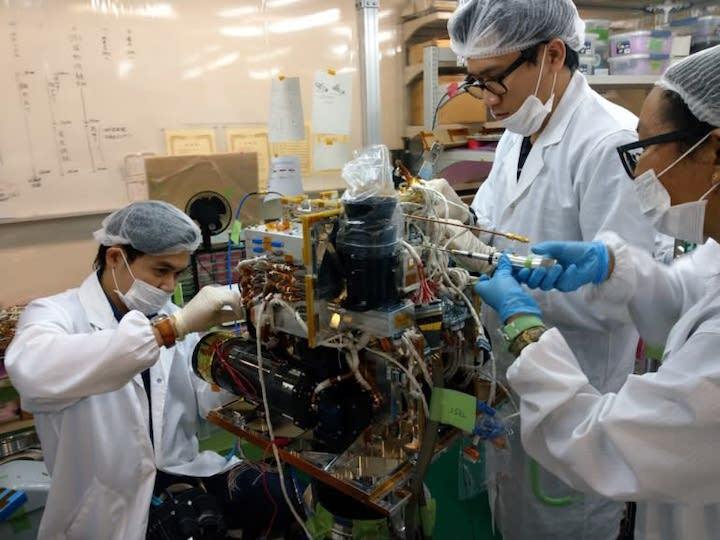 YANGON -- Myanmar plans to launch its first satellite in 2021, using Japanese technology. Engineers and researchers in the country will develop an ultrasmall satellite and launch it into Earth orbit with the help of Japan's Hokkaido University and Tohoku University.

The satellite will be an earth observation satellite, which will be used to raise productivity in agriculture, as well as to prevent and reduce damage from disasters and monitor environmental pollution, Yukihiro Takahashi, a professor at Hokkaido University and director of the university's Space Mission Center, told Nikkei.

Graduate students from Myanmar Aerospace Engineering University, a national university in Myanmar, will come to Japan and work on the development of a microsatellite weighing about 50 kg and measuring a maximum of about 50 cm on each side, Takahashi said.

Under the program, the Myanmar engineers will develop two satellites over five years, and through a series of processes leading up to the launch, they will gain expertise in designing satellites and analyzing satellite data. The total cost of 1.7 billion yen ($16 million), including satellite development and launch costs, will be financed by the Myanmar government.

The first seven students were to arrive in Japan in March, but their visit has been delayed due to travel restrictions amid the novel coronavirus outbreak. "The preparation for the program is ongoing and we are ready to welcome the students when the situation gets better," Takahashi said.

The project is part of a program by the Myanmar government aimed at building the nation's own satellite system. In 2017, the government established a steering committee to set up a Myanmar-owned satellite system, which is chaired by Myint Swe, the country's vice president.

In August 2019, Intelsat 39, a communications satellite, was launched from French Guiana. Myanmar has obtained the right to use part of the satellite's functions for services in the country.

"Intelsat 39 will help support and advance the [government's] goal of ensuring that 95% of its population have access to broadband connectivity by 2022," said Terry Bleakley, Intelsat's regional vice president for Asia Pacific.

Hokkaido University and Tohoku University have developed two unique technologies for microsatellites. One is to tilt the attitude of a satellite to precisely target a specific area. The other allows remote adjustment of the sensor to detect a different spectrum of light depending on the purpose. Both technologies will help to enhance observation flexibility, and are likely to be installed on Myanmar's new satellite.

In Myanmar, where the road network is in poor condition, it is difficult to drive to farming areas to confirm the growth of crops or the presence of environmental pollution. However, satellites can observe vast tracts of land from space.

The Myanmar students coming to Japan will learn what observation purposes satellites should be used for and what satellite designs are needed, as well as how they can be produced.

Emerging Asian countries, such as the Philippines, Malaysia and Indonesia, have become active in space development. While large satellites cost hundreds of millions of dollars to develop, the development costs for microsatellites are about a hundred times less, at $3 million to $5 million each. "Emerging countries with limited economic resources can afford to launch satellites to help to solve various problems in agriculture and the prevention of disasters," Takahashi said.

Prior to their joint project with Myanmar, Hokkaido University and Tohoku University helped the Philippines to develop Diwata-1, its first satellite, which was launched in 2016, and its successor, Diwata-2. Research using images provided by Diwata-1 led to the detection of a disease in bananas. Examining satellite images makes it much easier to respond quickly to disease.

In 2016, the Asian Micro-satellite Consortium was formed on the initiative of Hokkaido University's Space Mission Center. The consortium is formed from 16 universities and space agenciesfrom emerging Asian countries, including Myanmar and Japan, and aims to share microsatellite development technology and observation data. In the future, the participants are expected to jointly operate satellites launched by separate countries. With 50 microsatellites, the whole world can be continuously monitored.

"Space has no national borders," Takahashi said. "We would like to create an environment in which we would consider how to use space as a community, including emerging countries, without being controlled by superpowers like the U.S. and China and major IT companies."