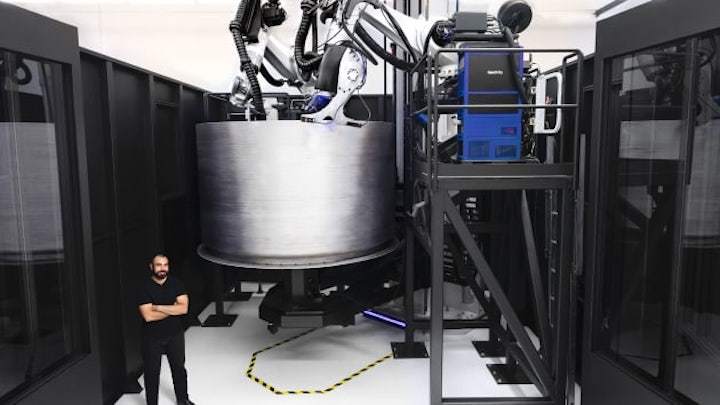 Relativity Space passed a key milestone toward its goal of launching a rocket that is almost entirely 3D-printed.

The Los Angeles-based space start-up conducted a series of tests in December using a 3D-printed tank, which the company increasingly pressurized until it burst.

Ellis explained that “the point is to figure out what pressure the vessel actually holds.” While the tank was a fifth the size of the one that will be used for Relativity’s Terran 1 rocket, it was structurally representative of the pressures and stress that it would undergo during a launch.

Relativity co-founder and CTO Jordan Noone stands next to one of the company’s Stargate 3D printers.
Relativity

The burst pressurization tests helped the company verify its ambitious 3D-printing approach to building rockets, as well as the materials it’s using. Ellis said the tank burst at about “10% more than the requirements with the safety factor” needed for a launch.

Relativity’s rocket development is still on track for its first launch in 2021, Ellis noted, despite the coronavirus pandemic that’s begun causing delays within the space industry. While the company’s rocket engine test program has been “delayed the most,” due to NASA’s Stennis center largely shutting down, Ellis said that overall Relativity has been able to continue moving forward. That’s in large part because of Relativity’s unique approach to manufacturing.

“There’s just fewer processes and way fewer supply chain steps, because almost everything is made from very limited raw materials, like our whole rocket structure. All of the engine and the other auxiliary structure components are made from just two raw materials, so it’s a very simple supply chain,” Ellis said.

“We are not planning any layoffs and are actually accelerating our hiring,” Ellis said. “We’ve actually done well over a dozen either new hires or on boarding people remotely via Zoom during this time.”

His company began telling the majority of its workforce of more than 150 employees to stay home the first week of March. But the company has been able to keep development moving forward, as Ellis said Relativity has had all four its “Stargate” printers running during this time.

“We have one person per building operating printers right now,” Ellis said.

Relativity in February secured a new headquarters in Long Beach, California, which Ellis said most of the company will be moved into by the end of July, with “the whole facility operational by the end of this year.”

Relativity co-founder and CEO Tim Ellis stands next to a 3D printed part of the company’s Terran 1 rocket, with two of the Stargate printers visible in the foreground.
Relativity

As for Relativity’s backlog of customers, Ellis said that the company continues to see “just as much demand, if not more, than we’ve ever had,” including for a new “large customer” the company is working on closing a deal with soon.

Ellis said he agreed with the analysis offered by Rocket Lab CEO Peter Beck that funding during the crisis should be prioritized for companies that are building spacecraft, rather than those that are building rockets.

“I think it’s far more impactful for companies to have more government payloads to launch,” Ellis said. “If there’s more money going to these satellite programs then [there’s more that] launch companies like Relativity and others can potentially bid on and win.”

Relativity is building the “first stage” structures for its Terran 1 rocket, which Ellis said will pair with a full-size engine on an already build “second stage” structure. The company’s next major milestone will be “an integrated stage test” later this year, Ellis added.