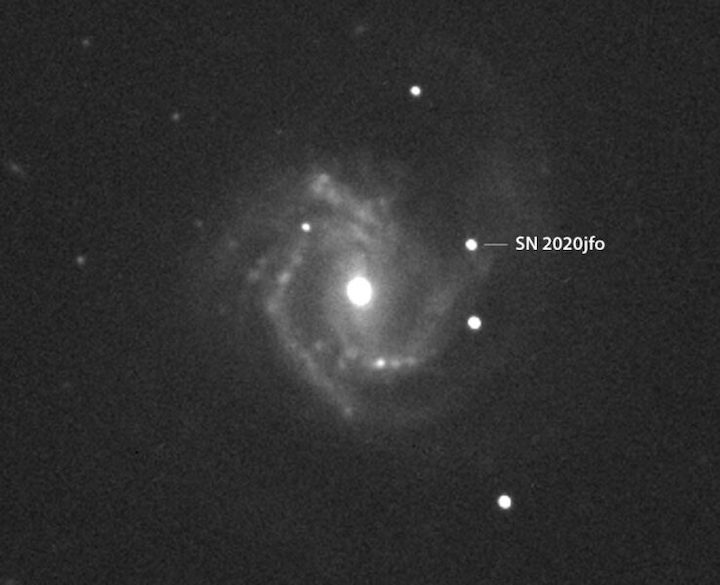 The Zwicky Transient Facility discovered supernova 2020jfo in the bright galaxy M61 in Virgo on May 6, 2020 — the 8th supernova recorded in this galaxy since 1926. North is up.
Gianluca Masi

My gosh, the sky is so busy with comets right now, do we really need a bunch of distracting supernovae?

Let's start with SN 2020jfo since M61 is a bright, familiar face in the Virgo cluster. The supernova is located 66″ west and 29″ north of the nucleus, about 40″ due north of a similarly bright foreground star. When discovered on May 6th, it glowed meekly at magnitude 14.7, climbing to 14.3 by the 10th. Because the explosion was caught early on the object will likely continue to brighten in the coming weeks. Daniel Perley (Liverpool John Moores University, UK) and team took spectra of the new object, suggesting in a recent AstroNote that it's a "young Type II supernova" caught about 7 days before its peak brightness.

The supernova is far from M61's blazing nucleus, gleaming bright and free in the galactic countryside. That makes it relatively easy to see compared to supernovae shrouded in the starry haze of their galaxies' cores. A 10-inch scope under dark skies should be able to handle this one. If it rises an additional magnitude, an 8-inch will do.

M61 itself is a beautiful barred spiral located about 52 million light-years away with a pinwheel of nebula-flecked arms and a bright, non-stellar core. It's also a starburst galaxy with an exceptionally high rate of star formation. Short-lived supergiant stars hatched within its myriad nebulae provide the fodder for regular supernovae. We've been enjoying the fireworks since the first supernova blew up here in 1926. Seven more followed in 1961, 1964, 1999, 2006, 2008, 2014 and now in 2020.

Type II supernovae like 2020jfo involve the sudden and violent collapse of a supergiant star when its nuclear fuel gas tank hits empty. With no heat and pressure in the core to battle back the crushing hand of gravity, the star implodes. The infall rebounds at the core, creating a shock wave of such ferocity that it rips through the star and blows it to bits in a titanic explosion 100 million times brighter than the Sun. No wonder we can see these things in our backyard telescopes!

SN 2020hvf was discovered in the 14th-magnitude galaxy NGC 3643 in southern Leo on April 21st by the ATLAS Project, the same group that successfully spotted two comets in the spring sky. Located 21.9″ east and 2.7″ north of the galactic nucleus, the supernova was initially faint — only magnitude 15.5. But by early May it had climbed to magnitude 12.5, outshining not just the core but the entire galaxy! While NGC 3643 is only a faint, 13.5-magnitude smudge, its supernova absolutely rocks.

Supernova 2020hvf is a Type Ia event, where a white dwarf accretes matter from a nearby companion star until it exceeds the Chandrasekhar Limit (1.4 solar masses). The additional weight and pressure of the stolen material initiates runaway nuclear fusion within the dwarf and boom! — it explodes as a supernova. Type Ia supernovae are typically more luminous than Type IIs.

With no Moon to brighten the evening sky, the next two weeks are ideal for observing these new guest stars. How sweet life is to witness a catastrophic event in a distant galaxy and then return home to sleep soundly on a soft bed.