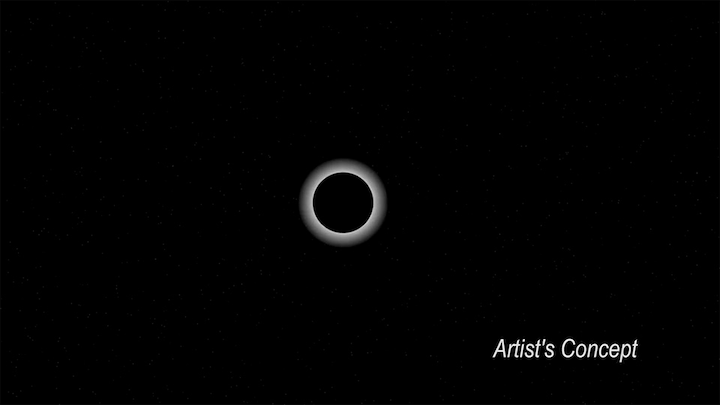 When the New Horizons spacecraft passed by Pluto in 2015, one of the many fascinating features its images revealed was that this small, frigid world in the distant solar system has a hazy atmosphere. Now, new data helps explain how Pluto’s haze is formed from the faint light of the Sun 3.7 billion miles away as it moves through an unusual orbit.

Remote observations of Pluto by NASA’s telescope on an airplane, the Stratospheric Observatory for Infrared Astronomy, or SOFIA, show that the thin haze enshrouding Pluto is made of very small particles that remain in the atmosphere for prolonged periods of time rather than immediately falling to the surface. SOFIA’s data clarify that these haze particles are actively being replenished – a discovery that is revising predictions on the fate of Pluto’s atmosphere as it moves into even colder areas of space on its 248-Earth-year orbit around the Sun. The results are published in the scientific journal Icarus. 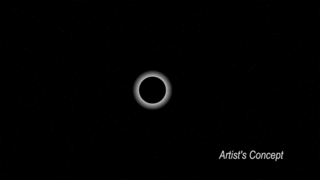 Still image from an animation illustrating Pluto passing in front of a star during an eclipse-like event known as an occultation. SOFIA observed the dwarf planet as it was momentarily backlit by a star on June 29, 2015 to analyze its atmosphere.
Credits: NASA

“Pluto is a mysterious object that is constantly surprising us,” said Michael Person, the lead author of the paper and director of Massachusetts Institute of Technology’s Wallace Astrophysical Observatory. “There had been hints in earlier remote observations that there might be haze, but there wasn’t strong evidence to confirm it really existed until the data came from SOFIA. Now we’re questioning if Pluto’s atmosphere is going to collapse in the coming years – it may be more resilient than we thought.”

SOFIA studied Pluto just two weeks before New Horizon’s flyby in July 2015. The modified Boeing 747 flew over the Pacific Ocean and pointed its nearly 9-foot telescope at Pluto during an occultation, an eclipse-like event in which Pluto cast a faint shadow on Earth’s surface as it passed in front of a distant star.

SOFIA observed the middle layers of Pluto’s atmosphere in the infrared and visible light wavelengths, and soon after, the New Horizons spacecraft probed its upper and lower layers using radio waves and ultraviolet light. These combined observations, taken so close in time, have provided the most complete picture yet of Pluto’s atmosphere.

Created as surface ice vaporizes under the distant light of the Sun, Pluto’s atmosphere is predominantly nitrogen gas, along with small amounts of methane and carbon monoxide. Haze particles form high up in the atmosphere, more than 20 miles above the surface, as methane and other gases react to sunlight, before slowly raining down to the icy surface. 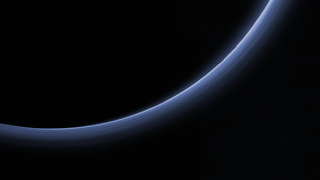 High-resolution color image of the haze layers in Pluto’s atmosphere, acquired by the New Horizons spacecraft on July 14, 2015.
Credits: NASA/JHUAPL/SwRI

New Horizons found evidence of these particles when it sent back images showing a blue-tinted haze to Pluto’s atmosphere. Now, SOFIA’s data fills in even more details by discovering that the particles are extremely small, just 0.06-0.10 microns thick, or about 1,000 times smaller than the width of a human hair. Because of their small size, they scatter blue light more than other colors as they drift toward the surface, creating the blue tint.

With these new insights, scientists are reevaluating their predictions on the fate of Pluto’s atmosphere. Many forecasts indicated that as the dwarf planets moved away from the Sun, less surface ice would be vaporized — creating fewer atmospheric gases while losses to space continued — eventually leading to atmospheric collapse. But rather than collapsing, the atmosphere appears to change on a shorter cyclical pattern.

Applying what they learned from SOFIA to reanalyze previous observations, including from SOFIA’s predecessor the Kuiper Airborne Observatory, shows that the haze thickens and then fades in a cycle lasting just a few years. This indicates that the tiny particles are being created relatively quickly. The researchers suggest that Pluto’s unusual orbit is driving the changes in the haze and therefore may be more important in regulating its atmosphere than its distance from the Sun.

Pluto circles the Sun in a long, oval shape, called an elliptical orbit, and at an angle, called an inclined orbit. It also rotates on its side. This causes some areas of the dwarf planet to be exposed to more sunlight at different points in the orbit. When ice-rich regions are exposed to sunlight, the atmosphere may expand and create more haze particles, but as those areas receive less sunlight, it may shrink and become clearer. This cycle has continued even as Pluto’s distance from the Sun has increased, though it’s not clear if this pattern will continue.

“There’s still a lot we don’t understand, but we’re forced now to reconsider earlier predictions,” said Person. “Pluto’s atmosphere may collapse more slowly than previously predicted, or perhaps not at all. We have to keep monitoring it to find out.”

SOFIA was uniquely positioned to study Pluto from afar by taking advantage of a rare moment when Pluto passed in front of a distant star, casting a faint shadow across the Earth’s surface. Momentarily backlit by the star, Pluto’s atmosphere could be analyzed.

Traveling at 53,000 miles per hour, Pluto’s shadow was expected to appear for a brief two minutes over the Pacific Ocean near New Zealand. SOFIA charted its course to intercept, but two hours before the occultation an updated prediction placed the shadow 200 miles to the north.

“Capturing that shadow required a bit of scramble. SOFIA has the benefit of being mobile, but the revised flight plan had to be cleared by air traffic control,” said William Reach, SOFIA’s associate director for science operations. “There were a few tense moments, but the team worked together, and we got clearance. We reached Pluto’s shadow at exactly the right time and were very happy to have made it!”

Remote observations like these allow scientists to monitor planetary bodies in between spacecraft flybys, which can often be separated by many years. The agreement between the data gathered remotely by SOFIA and from New Horizons’ close flyby supports that occultation observations from Earth can provide high quality data between spacecraft missions.

SOFIA studied Pluto's shadow as it traveled across the surface of the Earth at more than 53,000 mph on the night of June 29, 2015. The careful planning and real-time adaption of the observatory’s flight path leading up to observation allowed scientists to analyze Pluto's atmosphere.
Credits: NASA

SOFIA, the Stratospheric Observatory for Infrared Astronomy, is a Boeing 747SP jetliner modified to carry a 106-inch diameter telescope. It is a joint project of NASA and the German Aerospace Center, DLR. NASA’s Ames Research Center in California’s Silicon Valley manages the SOFIA program, science and mission operations in cooperation with the Universities Space Research Association headquartered in Columbia, Maryland, and the German SOFIA Institute (DSI) at the University of Stuttgart. The aircraft is maintained and operated from NASA’s Armstrong Flight Research Center Building 703, in Palmdale, California.