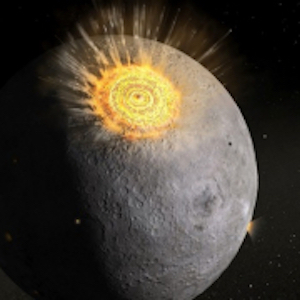 New research published today in the journal Nature Astronomy reveals a type of destructive event most often associated with disaster movies and dinosaur extinction may have also contributed to the formation of the Moon’s surface.

A group of international scientists led by the Royal Ontario Museum has discovered that the formation of ancient rocks on the Moon may be directly linked to large-scale meteorite impacts.

The scientists conducted new research of a unique rock collected by NASA astronauts during the 1972 Apollo 17 mission to the Moon. They found it contains mineralogical evidence that it formed at incredibly high temperatures (in excess of 2300 °C/ 4300 °F) that can only be achieved by the melting of the outer layer of a planet in a large impact event. In the rock, the researchers discovered the former presence of cubic zirconia, a mineral phase often used as a substitute for diamond in jewellery.

The phase would only form in rocks heated to above 2300 °C, and though it has since reverted to a more stable phase (the mineral known as baddeleyite), the crystal retains distinctive evidence of a high-temperature structure. An interactive image of the complex crystal used in the study can be seen here using the .

While looking at the structure of the crystal, the researchers also measured the age of the grain, which reveals the baddeleyite formed over 4.3 billion years ago. It was concluded that the high-temperature cubic zirconia phase must have formed before this time, suggesting that large impacts were critically important to forming new rocks on the early Moon.

Fifty years ago, when the first samples were brought back from the surface of the Moon, lunar scientists raised questions about how lunar crustal rocks formed. Even today, a key question remains unanswered: how did the outer and inner layers of the Moon mix after the Moon formed?

This new research suggests that large impacts over 4 billion years ago could have driven this mixing, producing the complex range of rocks seen on the surface of the Moon today. “Rocks on Earth are constantly being recycled, but the Moon doesn’t exhibit plate tectonics or volcanism, allowing older rocks to be preserved,” explains Dr. Lee White, Hatch Postdoctoral Fellow at the ROM.

“By studying the Moon, we can better understand the earliest history of our planet. If large, super-heated impacts were creating rocks on the Moon, the same process was probably happening here on Earth”. “By first looking at this rock, I was amazed by how differently the minerals look compared to other Apollo 17 samples,” says Dr. Ana Cernok, Hatch Postdoctoral Fellow at the ROM and co-author of the study. “Although smaller than a millimetre, the baddeleyite grain that caught our attention was the largest one I have ever seen in Apollo samples. This small grain is still holding the evidence for formation of an impact basin that was hundreds of kilometres in diameter. This is significant, because we do not see any evidence of these old impacts on Earth.”

Dr. James Darling, a reader at the University of Portsmouth and co-author of the study, says the findings completely change scientists’ understanding of the samples collected during the Apollo missions, and, in effect, the geology of the Moon. “These unimaginably violent meteorite impacts helped to build the lunar crust, not only destroy it,” he says.

Photo: An artist’s impression of how the early Moon was reshaped by an intense period of bombardment. A new study reveals that large impacts could have produced the range of lunar rocks sampled by the Apollo missions over 4.3 billion years ago. Illustration credit: Daniel D. Durda/FIAAA.