Adventurists around the world are now lining up for Virgin Galactic tourist flights into space, but in the near future, the company could also be rocketing people around the globe.

The company said in February that it wants to build a fleet of vehicles that could transport passengers from Los Angeles to Tokyo in just two hours, and from New York to London in one.

It’s already working on the technology at its headquarters at the Mojave Air and Space Port in California. That’s where The Spaceship Co., Virgin Galactic’s subsidiary, built the first VSS Unity passenger rocket and the VMS Eve mothership, which are both in New Mexico now doing test flights to prepare for commercial launch.

Once operational, Eve will carry the Unity on its underbelly to about 45,000 feet, at which point the spaceship detaches from the carrier plane and fires its motors to shoot into space at more than 50 miles up. 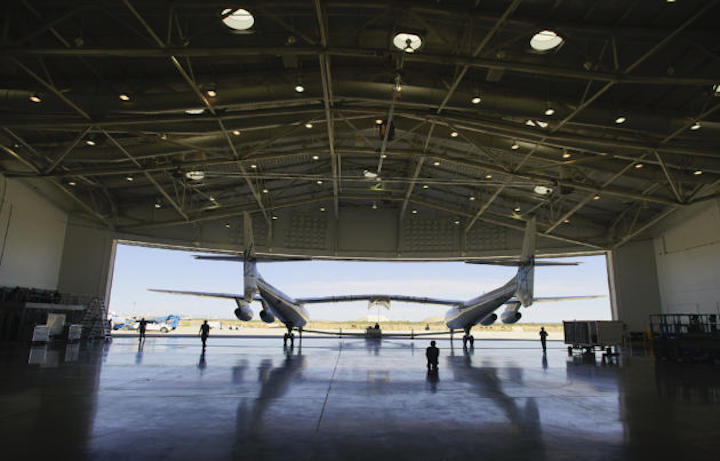 Virgin Galactic Mothership Eve is pulled into the hangar at Spaceport America last year. The company is working on technology to power a fleet of vehicles for superfast Earth travel. (Adolphe Pierre-Louis/Albuquerque Journal)

The Spaceship Co. is now building more rockets and motors to join the Unity and Eve in New Mexico. But alongside those efforts, it’s laying the groundwork for superfast Earth-bound planes, drawing in good part on the knowledge and technological advances achieved through 16 years of research and development of commercial spaceships.

Those plans got a boost last Tuesday, when Virgin Galactic announced a new Space Act Agreement with NASA to work together on the technology needed to facilitate development of high speed point-to-point travel.

The agreement, signed with the Langley Research Center, enables collaboration across all of NASA, the company said.

“This is the beginning of an important partnership for Virgin Galactic and The Spaceship Co. that will support the future development of aviation technology,” Virgin Galactic CEO George Whitesides said in a statement. “Virgin Galactic’s unique experience and innovative technology platform will, in partnership with the historic capabilities of NASA and other government agencies, enable the progression of new technical steps that will improve U.S. competitiveness. We see this as an area with tremendous growth potential that we will continue to invest in, alongside our commercial spaceflight operations.” 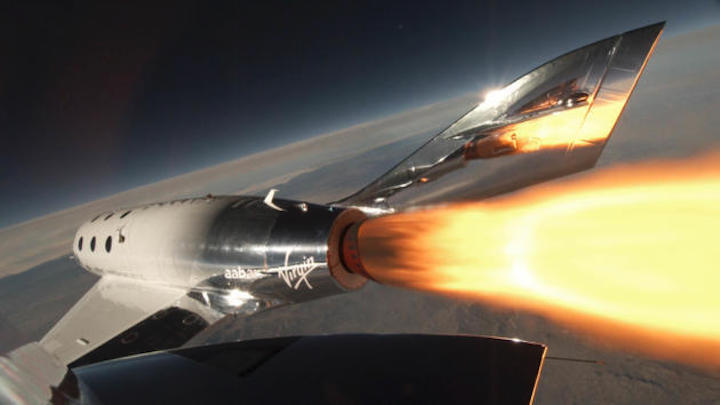 VSS Unity’s first powered flight on April 5, 2018. While Virgin Galactic is best-known for its ongoing efforts to offer commercial space flight, the company is gearing up for a push to build a fleet of vehicles that will be able to transport paying passengers from Los Angeles to Tokyo in two hours. (Courtesy of Virgin Galactic)

The company envisions a system that would be integrated into existing airspace and airport infrastructure to allow passengers to board superfast vehicles for point-to-point trips across the globe.

“We’ve been traveling around the planet for 50 years at basically the same speed, but we’re looking at technology now that can greatly increase those speeds to connect the world a lot more in the future,” Palermo told the Journal in March. “We’re well-poised to do it as the only team today that’s already designing, building and flying a vehicle at supersonic speed. We’ve built the team and the processes for it.”

The company formed a partnership in October with Boeing, whose venture capital arm HorizonX invested $20 million to help develop high-speed mobility. A focused project team and an advanced engineering group are now working on that mission in Mojave.

A lot of research and development lies ahead, touching on everything from materials science and new analysis tools to propulsion, sustainable fuels, manufacturing guidance and navigation, Palermo said. But the company is not starting from scratch, given its extensive infrastructure in Mojave, where it employs about 500 people who specialize in every stage of new technology development, from designing systems to building, testing and deploying them.

“We’re not a startup,” Palermo said. “We have vertically integrated capabilities …We‘re the equivalent of a major aerospace contractor, but with much more lean and nimble operations.”

The company can’t say yet whether the forthcoming vehicles will travel at hypersonic speeds, often considered to start at Mach 5, which greatly exceeds the speed of sound. In its second-quarter earnings report last Tuesday, Virgin Galactic said the initial focus of its NASA agreement will be vehicle thermal management and propulsion system options in the Mach 3-5 range.

“We will build something to integrate into current airport infrastructure, which will help determine the right speeds,” Palermo told the Journal. “But it will definitely be much faster than the speed of vehicles today.”

New Mexico will play a role in developing high-speed mobility through Virgin Galactic teams stationed at Spaceport America in southern New Mexico, where the company will launch its commercial space service.

“Our teams in New Mexico will contribute to it,” Palermo said. “Our pilot core and maintenance team will be there, and we will leverage that base in New Mexico.”

Spaceport America Executive Director Dan Hicks said the spaceport is “uniquely suited” for hypersonic research and development given its location next to White Sands Missile Range and the unrestricted airspace there.

“A lot of hypersonic research and development is already coming to White Sands,” Hicks told the Journal in March. “We’re well positioned to support companies like Virgin Galactic as work to build those technologies advances.”

Long-term goals include turning the spaceport into a landing-and-departure link for high-speed vehicles when they begin flying around the world, Hicks added.

“We’re ideally suited for point-to-point transportation,” Hicks said. “We have regional airports close by to transport people here to board vehicles or depart to other destinations after they arrive at the spaceport. The Federal Aviation Administration is already working with spaceports to prepare that network for the future.”