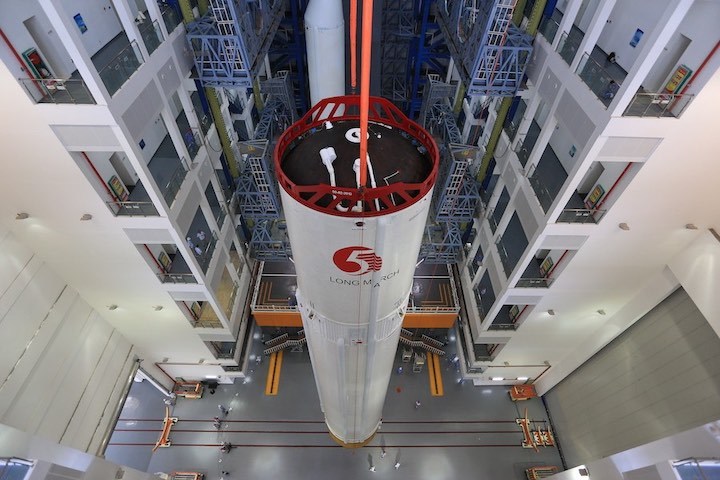 A Chinese rocket measuring around 100 feet long that launched earlier this month will likely plunge back into Earth’s atmosphere some time Monday, becoming the most massive object in decades to fall out of orbit in an uncontrolled manner.

As of Saturday, the rocket stage was circling Earth in an elliptical orbit ranging between 94 miles (152 kilometers) and 167 miles (270 kilometers) in altitude, according to U.S. military tracking data. A prediction issued Saturday by the U.S. military, which tracks objects in orbit, forecasts the rocket’s re-entry in a 24-hour period between 2335 GMT (7:35 p.m. EDT) Sunday and 2335 GMT (7:35 p.m. EDT) Monday.

But uncontrolled re-entries are difficult to predict, and the forecast could change as ground-based radars continue tracking the Long March 5B rocket body in orbit. Changes in atmospheric drag and solar activity could move the time of re-entry earlier or later.

A one-minute error in predicting the re-entry time changes the location of potential falling debris by nearly 300 miles, or about 500 kilometers, according to the Aerospace Corp.

The Long March 5B rocket body is in an orbit that flies between 41.1 degrees north and south latitude, meaning the re-entry could occur as far north as around New York City, or as far south as Wellington, New Zealand.

During the May 5 launch, the core stage contained super-cold liquid hydrogen and liquid oxygen to feed the rocket’s two YF-77 engines. Four liquid-fueled boosters clustered around the core stage dropped off the rocket around three minutes after liftoff to call into the South China Sea.

With the tanks empty, the Long March 5B’s core stage stage has a mass of roughly 20 metric tons. An exact mass figure has not been released by Chinese officials.

That makes the Long March 5B core stage the most massive object to make an uncontrolled re-entry since the Soviet Union’s Salyut 7 space station in 1991, according to Jonathan McDowell, an astronomer at the Harvard-Smithsonian Center for Astrophysics who tracks global satellite and launch activity.

The core stage is more massive than other notable satellites that have plunged unguided back into Earth’s atmosphere in the last decade, such as China’s Tiangong 1 space lab, Russia’s failed Phobos-Grunt Mars probe, and NASA’s UARS atmospheric research satellite. It’s about one-quarter the mass of NASA’s Skylab space station, which made headlines when it fell to Earth over Australia in 1979.

Dead satellites and old rocket stages regularly re-enter the atmosphere, but re-entering objects with masses of more than a few tons are rare.

There have been no reported human injuries or deaths from falling space junk. NASA in 2011 calculated a 1-in-3,200 chance of someone being hit by debris from the UARS satellite, which was less than one-third the mass of the Long March 5B core stage. A casualty risk estimate for the Long March 5B was not available.

In 2016, an upper stage from a Chinese Long March 7 rocket — about one-third the mass and size of the Long March 5B core stage — streaked through the atmosphere over the Western United States. The re-entry was captured on video.

The Long March 5B rocket body is mostly comprised of hollow propellant tanks, and much of the rocket’s structure is expected to burn up during re-entry. But some pieces, such as denser parts of the rocket’s two main engines, could survive the fall to Earth and hit the ground.

Space agencies, launch operators and satellite companies often try to guide spent rocket stages and aging satellites toward re-entries over the ocean, reducing the risk that debris could fall over a populated area.

In the case of the Long March 5B, the core stage delivered its payload — a prototype Chinese crew capsule — into a low-altitude orbit. The heavy-lift Long March 5B is designed to directly inject payloads into low Earth orbit without an upper stage, meaning the core stage also ends up in orbit, instead of immediately falling back to Earth in a predetermined downrange drop zone.

China plans to launch at least three more Long March 5B rockets in 2021 and 2022 with modules for the country’s planned space station, so more uncontrolled rocket re-entries are expected in the next couple of years.

After the Tiangong 1 space lab re-entered the atmosphere unguided in 2018, China performed a controlled de-orbit of the follow-on Tiangong 2 spacecraft in 2019.

The most massive human-made object to re-enter the atmosphere from orbit was Russia’s Mir space station, which made a guided re-entry over the South Pacific Ocean in 2001. NASA and Russia’s space agency have plans to eventually execute a controlled re-entry of the International Space Station at the end of its service life.