The big pre-Demo-2 boxes have now been checked. 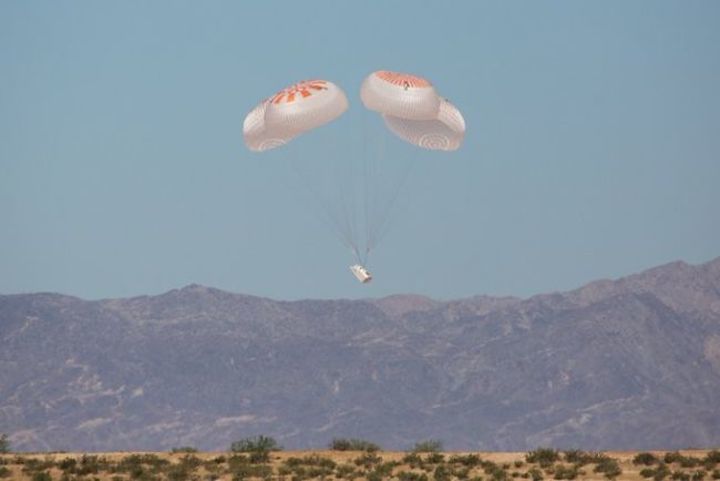 SpaceX conducted the 27th and final test of the Mark 3 parachute system for its Crew Dragon capsule on May 1, 2020.

The company had two big boxes to check off ahead of the planned May 27 liftoff of Demo-2, a test flight that will send NASA astronauts Bob Behnken and Doug Hurley to the International Space Station (ISS) aboard SpaceX's Crew Dragoncapsule.

One was a 27th and final drop test of Crew Dragon's newly redesigned parachute system, known as the Mark 3. That test occurred today (May 1), and all went well, SpaceX representatives said.

"27th and final test of Crew Dragon's upgraded Mark 3 parachutes complete — one step closer to flying @NASA astronauts @AstroBehnken and @Astro_Doug to the @space_station and safely returning them back home to Earth," SpaceX said via its official Twitter account.

The other issue concerned a failure of one of the nine Merlin engines on the first stage of a SpaceX Falcon 9 rocket during a March launch that lofted 60 of the company's Starlink internet satellites. The anomaly didn't interfere with the mission — the satellites reached orbit just fine — but Demo-2 will also use a Falcon 9, so NASA and SpaceX conducted an investigation to make sure the same thing won't happen again on the upcoming crew flight.

"We have reviewed the anomaly resolution of the Starlink launch and actually have cleared the engines on our vehicle for that failure," Kathy Lueders, manager of NASA's Commercial Crew Program, said during a news conference today. "So, that actually is behind us right now."

SpaceX has been developing Crew Dragon under contracts with the Commercial Crew Program. The most recent deal, signed in 2014, awarded Elon Musk's company $2.6 billion to finish work on the capsule and to fly six operational crewed missions to and from the ISS.

Those contracted flights can begin after Demo-2 is in the books. And the upcoming test flight is a big deal for other reasons as well. For example, Demo-2 will mark the return of orbital human spaceflight to U.S. soil after a nearly nine-year hiatus. The last such crewed mission to orbit, the final flight of NASA's space shuttle fleet, lifted off in July 2011. (Virgin Galactic has sent people to suborbital space twice since then, on piloted test flights of its SpaceShipTwo vehicle in December 2018 and February 2019.)

Boeing signed a NASA commercial crew contract in 2014 as well, a $4.2 billion deal that the aerospace giant will fulfill using its CST-100 Starliner capsule. But Starliner isn't ready to fly astronauts yet; the capsule still needs to ace an uncrewed test flight to the ISS, a milestone Crew Dragon achieved in March 2019.

Boeing took its own crack at the task in December of last year, but Starliner suffered a glitch with its onboard timing system and got trapped in the wrong orbit. The capsule was not able to rendezvous with the ISS as planned and had to return to Earth early.