SpaceX has won part of a new $1 billion NASA contract to create a custom version of Starship designed explicitly to send space agency astronauts and huge amounts of cargo to the Moon.

Incredibly, SpaceX won its Lunar Starship development contract alongside two others awarded by NASA – one to a Blue Origin-led coalition and the other to Dynetics and “more than 25 subcontractors”. Of the three, only SpaceX’s offering is a single-stage lunar lander, while Dynetics wants to build a two-stage lander and Blue Origin wants to build a three-stage lander. It also appears that SpaceX’s custom Starship is the only lander designed to be at least partially reusable, capable of flying “many times between the surface of the Moon and lunar orbit” according to the launch company.

While potentially very exciting, the fate of NASA’s triple-threat Moon lander contract award now rests almost entirely in the hands of Congress. As of today, NASA has committed almost $970 million to the three lunar landers it’s decided to develop, only part of which the space agency appears to have on hand and ready for dispersal. For the program to even begin to approach actual missions to the Moon, let alone astronaut landings, Congress will have to consistently raise NASA’s budget every year for at least the next five to six. 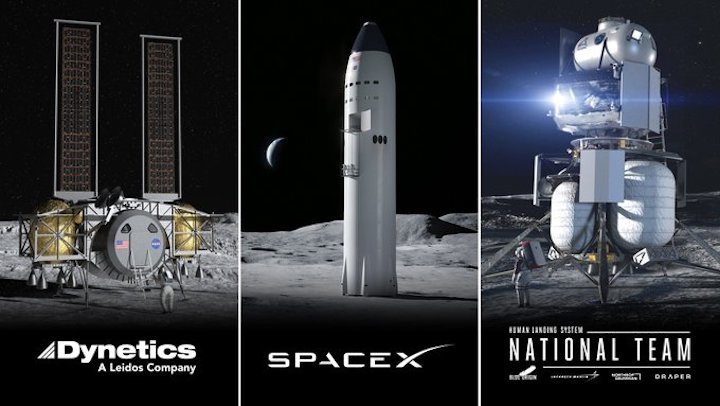 Even insofar as that required budget raise (roughly ~$3B per year) is only a 10-15% increase and is effectively a rounding error relative to the rest of the federal budget, military in particular, the odds that Congress will consistently and fully support it are not great. For example, the Commercial Crew Program (CCP) – set to attempt its inaugural astronaut launch next month – began in 2010 with the expectation it would cost around $7-8 billion and achieve its first crewed launch in 2015 or 2016.

From 2010 to 2015, Congress systematically underfunded the Commercial Crew Program for largely parochial reasons, preferring to put money into projects (typically the Space Launch System rocket, Orion spacecraft, and their launch facilities) that directly benefited their districts or states. Over half a decade, Congress supplied only 60% of the funds CCP had budgeted, a lack of resources that likely directly resulted in years of program delays. Notably, while both Boeing and SpaceX have run into significant technical hurdles and suffered their own technical delays, the companies would have almost certainly been able to discover those hurdles earlier on if they’d had the full CCP budget supporting them.

It’s entirely unclear whether NASA’s new Artemis Moon lander program will have a better or worse time than the Commercial Crew Program. The same parochial SLS/Orion/ground systems interests remain in full force in the US House and Senate and will likely not be pleased by the fact that only one of NASA’s three HLS awards could result in SLS launch contracts. Surprise winner Dynetics has proposed a lander that can launch on either SLS 1B or the United Launch Alliance (ULA) Vulcan Centaur rockets.

Ultimately, this is the most significant acknowledgement and support SpaceX’s next-generation Starship rocket has ever received from NASA or the US federal government. Still, of the ~$970 million NASA has initially committed, Starship only received $135 million – nearly half as much as Dynetic received and more than four times less than Blue Origin’s award. NASA is thus clearly hinging its investment on SpaceX’s continued internal support for its next-generation, fully-reusable launch vehicle, as $135 million certainly isn’t enough for even SpaceX to build a building-sized rocket to land astronauts on the Moon.

Regardless, this is certainly one of the most intriguing possible outcomes of NASA’s Human Lander Systems contracts and should keep things very interesting – pending Congressional support – over the next several years.

SpaceX’s newly-announced Moon Starship is a fairly radical departure from the Mars-focused, fully-reusable vehicle the company has been pursuing for years. Unintuitively, that may be the perfect half-step towards truly reusable Mars rockets.

On April 30th, NASA announced that SpaceX had won $135 million to design and build a highly-customized variant of its reusable Starship spacecraft with the intention of launching a handful of space agency astronauts to the Moon in the mid-2020s. Whether or not that initial seed translates into enough funding to seriously design and build the ship SpaceX has shown off in new renders, it has already broken the ice, so to speak, between the US federal government (or at least NASA) and the company’s ambitious next-generation launch vehicle.

With a substantial amount of money now on the table for SpaceX to begin initial work on its Moon Starship, it’s worth analyzing just how different it is from the Starship the company is working on today.

First and foremost, perhaps the most obvious difference between SpaceX’s ‘base’ Starship and its lunar variant is the rocket’s hull. In the case of the Moonbound ship, SpaceX appears to have returned to a fully-painted vehicle for unknown reasons. More likely than not, that white paint is likely motivated by the fact that proposed NASA Moon landers must (obviously) be capable of landing and safely returning their astronaut cargo back into lunar orbit.

To do that, those landers must be able to sit on the surface of the Moon after landing for at least several days, with longer stays being even better. For Starship, this means that the vehicle must likely be able to keep its cryogenic liquid methane and oxygen propellant from warming up and turning into gas, thus preventing it from igniting its main Raptor engines. White paint is at least a bit more reflective (and thus insulating) compared to Starship’s shiny steel hull but it could also hint at the use of more extensive insulation then sealed off with paint.

This ties into perhaps the most significant functional change to the rocket. While visible in a render of the craft after landing on the Moon, a separate render just before touchdown fully revealed not only the addition of large vacuum-optimized retrothrusters – but a major strategic shift in how Lunar Starship will attempt to land on the Moon.

In short, it appears that SpaceX does not plan on propulsively landing Lunar Starship on the Moon under the power of its main Raptor engines. Instead, three triple-thruster clusters – likely relying on the same methane and oxygen propellant as Raptor – will fire up shortly before touchdown to gently land Starship on the Moon. This approach has significant benefits: the Moon’s gravity is so low (~1/8th of Earth’s) that using even just one engine as powerful as Raptor to land would be incredibly difficult – a single engine could theoretically lift a fully-fueled Starship thanks to low lunar gravity.

Additionally, powerful Raptor engines – even if they could be used to land – would likely dig huge craters in the Moon’s powder-like surface during a landing burn, making it more difficult astronauts to leave the ship to explore their surroundings. However, it also means that SpaceX must design and certify an entirely new kind of vacuum-optimized rocket engine – likely using gas propellant and fed by high-pressure tanks – for an extremely critical part of operations. If those landing engines were to fail, Starship would very likely crash on the Moon, marooning, wounding, or even condemning the astronauts aboard it.

Beyond new thrusters, a radically different landing strategy, and a painted (and possibly insulated) steel hull, Lunar Starship also features what looks like the tip of a Crew Dragon spacecraft in place of its nose, likely including Draco thrusters and a docking port. SpaceX has also copied the concept of Crew Dragon’s trunk section, installing a curved solar array that wraps around a large portion of Starship’s conical nose. Lunar Starship also offers what looks like the first official glimpse into a new style of Starship landing legs, prototypes of which are already installed on Starship SN4.

Additionally, SpaceX has chosen to entirely exclude a windward heat shield from Lunar Starship, as NASA’s plan is (rather painfully) to launch astronauts to the Moon with SLS and carry them to lunar orbit and back to Earth on Orion. Starship also appears to be missing its complex and extensive habitation module and massive gallery window. All that absent hardware is almost certainly meant to dramatically simplify Starship to the point that even NASA would consider funding its development. Incredibly, that strategy appears to have worked and it’s possible that we could see Lunar Starships flying to the Moon as early as 2022.

While a stop at the Moon is decidedly one-way and requires a bit of a one-off Starship variant, what SpaceX has really done is found a way to get NASA to help fund the development of its fully-reusable next-generation launch system. Even if NASA’s Artemis program dies, flounders, or goes nowhere, SpaceX will likely still benefit significantly, much in the same way that NASA’s assistance developing Cargo Dragon and Falcon 9 was a huge boon for the company.