A bustling stellar nursery in the picturesque Orion Nebula will be a subject of study for NASA’s James Webb Space Telescope, scheduled to launch in 2021. A team led by Mark McCaughrean, the Webb Interdisciplinary Scientist for Star Formation, will survey an inner region of the nebula called the Trapezium Cluster. This cluster is home to a thousand or so young stars, all crammed into a space only 4 light-years across — about the distance from our Sun to Alpha Centauri.

“That’s a location where there are many very young stars that are around a million years old,” explained McCaughrean, who is also the European Space Agency’s Senior Advisor for Science and Exploration. “A million years may not seem very young, but if our solar system were a middle-aged person, the stars in this cluster are just babies, three or four days old. So there are all sorts of interesting things going on with them that we don’t see in the older stars around us today. We’re very interested in understanding how stars and their planetary systems develop in the very earliest stages.”

Why the Orion Nebula? “Orion is the nearest region of massive star formation to the Sun,” said McCaughrean. “There are places closer to the Sun that have young, low-mass stars, but there are none closer that have both big stars and the very smallest objects.”

McCaughrean and his team will study three interesting phenomena in the Trapezium Cluster. First, they will survey the distribution of the masses of young objects in this cluster. Next, they will examine the very earliest phases of planet formation around the cluster’s young stars. Finally, the team will study the material many of the young stars are ejecting in jets and outflows. The observations are part of a Guaranteed Time Observations (GTO) program granted to McCaughrean because of his role as a Webb Interdisciplinary Scientist. 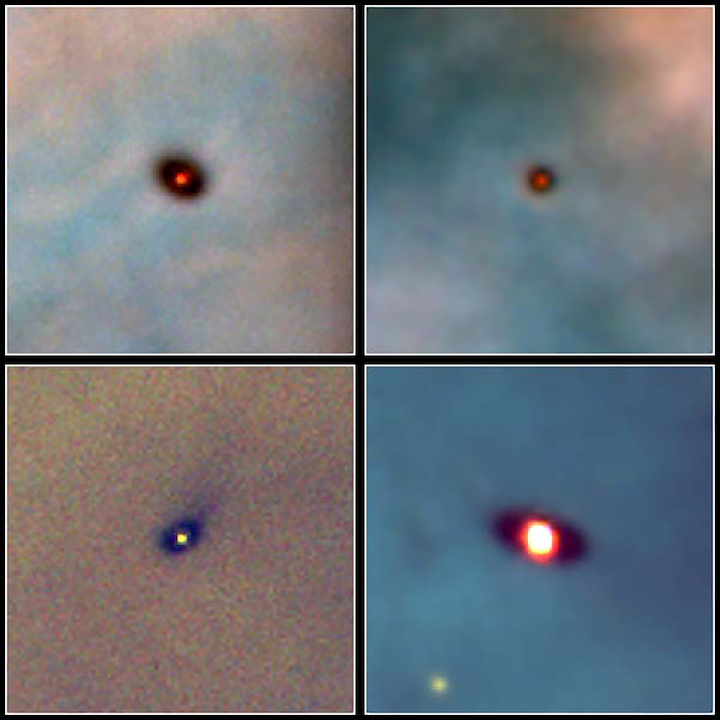 These are Hubble Space Telescope images of four protoplanetary disks around young stars in the Orion Nebula, approximately 1,300 light-years away. The disks range in size from two to eight times the diameter of our solar system. Astronomers spotted the disks in large-scale survey images of the Orion nebula taken with Hubble between January 1994 and March 1995.
Credits: Mark McCaughrean (Max-Planck-Institute for Astronomy), C. Robert O’Dell (Rice University), and NASA

Sorting the Stars and Other Young Objects

Aside from examining the cluster’s young stars, the scientists will look at bodies with masses below stars, called brown dwarfs. These are objects that form like stars via the gravitational collapse of clouds of gas and dust, but because they don’t have enough material, they never develop the temperatures and the pressures at their centers needed to fuse hydrogen.

They will also investigate smaller objects, equivalent in mass to Jupiter or even Saturn. Called “free-floating, planetary-mass objects,” they are not in orbit around a star. It is an open question whether they form the way other planets do—by accreting gas and dust from a protoplanetary disk left over from star formation.

Did such an object originally form as a planet around a star, or did it form out of the same gas and dust that the stars formed from, on its own? McCaughrean and his team are trying to answer that question. “Can we find some kind of characteristics that these extremely low-mass objects exhibit to help us work out whether they formed in isolation, or rather were actually formed as planets in orbit around stars, and got kicked out in some kind of interaction?”

The scientists will use multicolor Webb images to find objects down to very low masses and then look at how many of these objects there are in different mass categories — for example, how many are like the Sun; how many are a tenth of the mass of the Sun; and how many are a hundredth of the mass of the Sun. They will also use Webb to analyze their atmospheres. This information will tell the researchers a lot about how these bodies must have formed and how they will evolve as they grow older.

Some newborn stars in this nursery are encircled by disks of gas and dust that appear as silhouettes against the bright nebula. Astronomers believe that planets should be starting to form within these disks. McCaughrean and his team will use Webb’s high-resolution, infrared  imaging to measure the sizes of these disks. By comparing them with visible images made with the Hubble Space Telescope, the team will learn about the dust’s composition, which will help them understand the very earliest phases of planet formation.

This visualization explores the Orion Nebula using both visible and infrared light. The sequence begins with a wide-field view of the sky showing the plane of our Milky Way Galaxy, then zooms down to the scale of the Orion Nebula. The visible light observation (from the Hubble Space Telescope) and the infrared light observation (from the Spitzer Space Telescope) are compared first in two-dimensional images, and then in three-dimensional models. As the camera flies into the star-forming region, the sequence cross-fades back and forth between the visible and infrared views. Credit: NASA, ESA, and F. Summers, G. Bacon, Z. Levay, J. DePasquale, L. Hustak, L. Frattare, M. Robberto, M. Gennaro (STScI), R. Hurt (Caltech/IPAC), M. Kornmesser (ESA), A. Fujii Acknowledgement: R. Gendler Music: “Dvorak – Serenade for Strings Op22 in E Major larghetto,” performed by The Advent Chamber Orchestra, CC BY-SA

Surveying the Jets and Outflows

As young stars gather together material from the gas and dust that surround them, most also eject a fraction of that material back out again from their polar regions in jets and outflows. This process is an integral part of star formation. Because the Orion Nebula is home to many, many young stars, there are many jets and outflows in the region, both large and small. The team will use Webb to measure the fine structures in these outflows and determine their speeds, as well as assess their cumulative feedback on the surrounding star-forming clouds.

When stars are very young, they are surrounded by the gas and dust from which they are being made. The dust absorbs visible wavelength light and hides the stars behind an opaque screen. But long-wavelength light can penetrate the dust, and therefore even if astronomers are unable to see the stars in visible light, they are often still detectable in the infrared.

Also, when objects are young and still forming, they do not get particularly hot. This means they don’t glow brightly in visible wavelengths, but instead emit most of their light in the infrared. Infrared studies using ground-based telescopes have shown there to be many brown dwarfs in the Trapezium Cluster, but they have not been able to find young objects below the mass of about three Jupiters. There are two reasons for that.

First, the Earth’s atmosphere between the ground and the objects being studied glows brightly in the infrared. “In a way, it’s a bit like trying to do visible wavelength astronomy in the daytime,” explained McCaughrean. “You can see relatively bright things against that glow, but you can’t see very faint things. Webb will be above the Earth’s glowing atmosphere and make it possible.”

The second reason is that, unlike ground-based telescopes, Webb itself will be very cold. “Human beings are warm and glow in the infrared; ground-based telescopes also glow in the infrared,” said McCaughrean. “So, when you get to these cool, three-Jupiter-mass objects, almost all the light is coming out at quite long wavelengths where the telescope itself is glowing very brightly. In space, you can cool a telescope down to a point where it’s not glowing at all in those wavelengths. And that means all of a sudden you should be able to see all of these new, very faint, extremely low-mass young objects, things you will never see from the ground.”

Webb, a powerful, infrared space telescope, will thus be uniquely capable of studying these young stars, brown dwarfs, and free-floating planetary-mass objects, as well as their protoplanetary disks, jets, and outflows, in regions like the Orion Nebula.

The James Webb Space Telescope will be the world’s premier space science observatory when it launches in 2021. Webb will solve mysteries in our solar system, look beyond to distant worlds around other stars, and probe the mysterious structures and origins of our universe and our place in it. Webb is an international program led by NASA with its partners, ESA (European Space Agency) and the Canadian Space Agency.