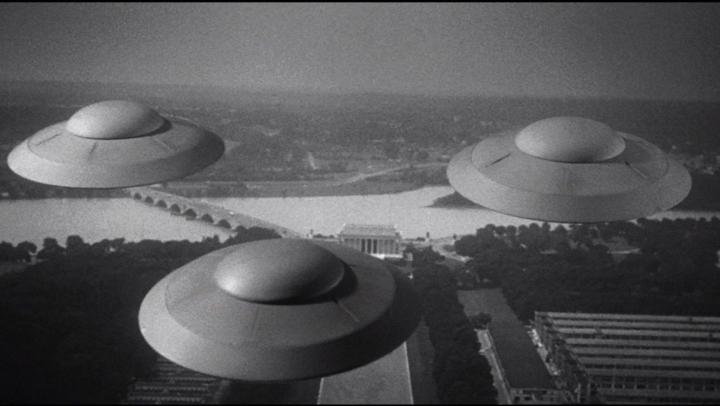 On 27 April 2020, the U.S. Department of Defense officially releasedthree unclassified videos, footage taken on Navy fighter jets. These videos, leaked to the public in 2007 and 2017, appear to show three unidentified flying objects moving in weird and unexpected ways. The Navy had already acknowledged the videos were real, but pointedly did not say what they show.

Do these videos show alien spaceships? If you do a lazy search on Google for them, the results might give you the idea they do. A lot of electrons have been spilled claiming these show alien vehicles making impossible maneuvers, are surrounded by a glow indicating some sort of advanced tech like a “warp drive,” and are clearly beyond our own miserable human technology.

But is any of this actually true?

Yeah, no. I mean, sure, the objects in the footage are unidentified, but something being a UFO doesn’t make it, y’know, a UFO.

The three released videos are short, and can all by found on the Navy FOIA page. They’re called FLIR.mp4 (taken in 2004), GOFAST.wmv, and GIMBAL.wmv (both from January 2015). All three were taken from Navy F/A 18 Hornet fighter jets, using a type of camera generically called Forward Looking Infrared, or FLIR.

For convenience, I edited all three into one video and put it on YouTube:

The first video (no audio) just seems to show a blob, but when they switch from FLIR to an optical camera (the object goes from white on black to black on white) the object is seen to be elongated, though blurry enough that an actual shape can’t be distinguished.

The second (which has audio) again shows an elongated object, apparently (note that word, apparently!) moving to the left rapidly. A pilot says there’s more than one, though only one can be seen here. At 1:24 a pilot says, “My gosh, they’re all going against the wind… the wind’s 120 knots to the west.” A moment later the object appears to rotate, and the pilot notes that as well.

It's not. Credit: Phil Plait

The third may be the most interesting, since it shows a small object apparently (note that word again!) moving low and fast across the water, with pilots exclaiming when they get the camera to track it automatically.

So what are we seeing? Having some familiarity with camera systems (I’ve worked extensively in processing digital images from Hubble, for example) I could see what was going on in some of the video. For example, the “aura” around the object in some of the footage could simply be the camera overexposing around a bright object; infrared cameras can do that, creating an odd glow. If the video is processed to sharpen it up (for example, using deconvolution), that can also cause a glow around a target.

I wasn’t sure about what else I was seeing, but happily, a friend pointed me to a website called MetaBunk, run by former video game programmer and critical thinker Mick West. He has a discussion board there, where these videos are meticulously analyzed — specifically, the GOFAST and GIMBAL videos. These are very entertaining threads, and I highly recommend reading them. Pretty much every aspect of the videos is discussed and, in the end, shown to have far more pedestrian causes than alien spaceships.

Or, if you prefer, West has an excellent series of videos on YouTube explaining everything as well.

Here’s a short overview video he made about them:

He has a playlist of over a dozen YouTube videos where he analyzes the Navy videos, looking at them piece by piece. Again I recommend watching them; they’re fascinating.

For example, in this one he argues, convincingly to me, that the FLIR video just shows a passenger plane seen from a distance. He also shows that the rotation of the object in the GIMBAL video is almost certainly due to the motion of the camera itself as it tracks the objects. The fighter jet is turning, and at the same time the camera is mounted on a rotating mechanism that allows it to track. These two motions combine to make a somewhat confusing series of rotations in the image, which is why the object in the video appears to rotate around.

But my favorite bit is a video where he gives a single, simple explanation that accounts for two things seen in the Navy videos, specifically, why the object in the GOFAST video appears to scream across the water so rapidly, and how in the GIMBAL video the object seems to travel against a strong wind. The answer: It’s an illusion due to parallax, how an object close to you seems to move more rapidly against a more distant background as the camera moves:

I. LOVE. That. I mean, I love illusions, of course, but I also love how it neatly explains how a stationary object looks like it’s moving rapidly. It doesn’t matter if there’s a wind, either; the object could even be moving with the wind, but the jet’s motion in a different direction makes it look like the object is moving against the wind. However given the distance, angle, and motion, it’s likely that the GOFAST video shows a balloon. Yes, a balloon. In this video he actually does the math using information in the video itself to show that the object is well above the water and moving slowly.

In general, UFO reports, even ones where there are photos and videos, have fairly mundane explanations, so much so they’re clichés: Venus, Jupiter, even the Moon. Pilots have a lot of experience seeing things around them, but that’s not a guarantee they’ll know what they’re seeing every time, and in fact there are a lot of reports from pilots of UFOs moving off at high speeds, chasing them, circling them, and so on, and it turns out to be the planet Venus in the evening sky. Venus can be astonishingly bright, and gets mistaken for a UFO a lot. A lot a lot. Remember, too, that in the videos the pilots are watching the displays from the cameras, and not necessarily seeing the objects directly. That would explain their exclamations, and also why they may have been fooled.

So why hasn’t the Navy said anything about these explanations? I have to guess here, but it seems likely to me that they aren’t allowed to. Releasing video is one thing, but going on record to state that the object is actually a balloon or a plane is another. I’m not sure it would help anyway; those MetaBunk discussion pages have been up for years — years — yet we still get breathless articles (from news venues that should know better) saying these videos are evidence of alien spaceships. It’s maddening, but it’s also par for the course.

After all, it’s more fun (and more profitable) to claim aliens are seen in official Navy footage than it is to say that the pilots mistook a balloon for the Enterprise.

Now, these videos are clearly parts of longer ones, and perhaps those pieces of footage are still classified. Since I haven’t seen them I can’t say much about them. To be fair I’ll note there are interviews with Navy pilots describing things they’ve seen, and without the footage I can’t say anything about those claims either. But the videos we do see make it clear what we’re not seeing: aliens.

Look, if there’s any UFO video I do wanna see, it has been and always will be this one: