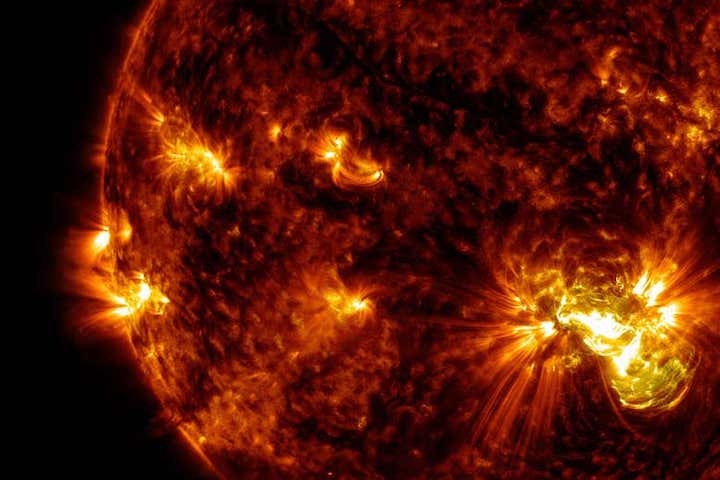 The sun is surprisingly sleepy in comparison with other similar stars, which may mean that it will, at some point, enter a period of higher activity.

The varying activity and brightness of a star is driven by its magnetic field, which causes dark areas called starspots – or sunspots if they happen on the sun – as well as huge flares. Timo Reinhold at the Max Planck Institute for Solar System Research in Göttingen, Germany, and his colleagues compared measurements of this activity for 369 sun-like stars observed by the Kepler space telescope, along with the sun.

These stars all have similar temperatures, chemical compositions, ages, sizes and rotation periods. But despite all of these similarities, the researchers found that nearly all of these stars varied in brightness more than the sun.

“These stars are similar in every way we can measure to the sun, but many of them show variability up to five times higher than the sun, which was surprising,” says Reinhold. “One possible conclusion would be that there is some yet-unidentified quality of these stars that we don’t know that is different from the sun.”

In a larger sample of 2529 stars – the rotation periods of which we haven’t measured, but that are similar to the sun in every other way – most had similar variability to the sun. This could mean that the stars with rotation periods that we can measure may be more variable, for some reason.

Regardless, the fact that there are sun-like stars with much higher variability suggests it is possible that the sun could be in a temporarily calm phase now and its activity may ramp up in the future, says Reinhold. He says that while we can’t predict exactly when this could happen, it would lead to brighter auroras and potentially dangerous solar eruptions that could damage our electrical grids.

HOW LAZY IS THE SUN?

A study of hundreds of Sun-like stars shows that most of them are more active than the Sun itself.

Our Sun is pretty slothful, compared to many of its stellar look-alikes. Sure, it has its occasional spots and flares, but they don’t alter the Sun’s energy output by more than 0.3%. In contrast, according to a new study published in this week’s Science, many stars that look like solar twins in every aspect exhibit brightness changes that are five times as large as our star’s.

An international team led by Timo Reinhold (Max Planck Institute for Solar System Research, Germany) searched the huge data set amassed by NASA’s Kepler space telescope for stars with Sun-like temperature, surface gravity, and composition. They then added distance measurements and other data from the European Space Agency’s Gaia mission to reveal the positions of the stars on the Hertzsprung-Russell diagram. This iconic plot of the stars’ luminosity and temperature made it possible to select only those with ages similar to the Sun.

Magnetic activity on a star’s surface is driven by stellar rotation. From tiny periodic brightness variations in the Kepler data (probably due to large sunspots rotating in and out of view), the team found 369 Sun-like stars with rotation rates between 20 and 30 days, comparable to our own Sun’s 24.5 days. What was surprising was that, most of these stars’ brightnesses fluctuated more than the Sun’s does.

The researchers also looked at a larger sample of 2,529 Sun-like stars for which no rotation rates could be derived, but which is expected to contain many stars rotating at rates similar to the Sun. The difference in activity is smaller in this sample. Nevertheless, being Sun-like in every aspect apparently doesn’t guarantee placid behavior.

“[The result] fits in with ideas that the current solar dynamo is near a transition point between one dynamo type and another,” says Hathaway.

Solar physicist Mausumi Dikpati (University Corporation for Atmospheric Research) agrees. “It is likely evidence of stellar dynamos having different ‘regimes’ of stronger or weaker activity, which can last for many cycles,” she says. These changes could come from changes in the way the Sun’s rotation depends on depth.

It’s also possible there is no fundamental difference between the Sun and the Sun-like stars found in the Kepler data — it could be the Sun just hasn’t exhibited its full possible range of activity for quite a while. Studies of radioactive isotopes produced by cosmic ray particles reveal that our star hasn’t been substantially more active for the past 9,000 years or so than it is now, but, according to Reinhold, “compared to the entire lifespan of the Sun, 9,000 years is like the blink of an eye.”

According to Frederic Clette (Sunspot Index and Long-term Solar Observations, Belgium), the new result is of particular interest because it exploits a new rich stellar data set. “However,” he says, “it leaves a number of open questions, calling for a broader and finer study to firmly establish that the Sun is truly an anomaly.”