"This is really exciting — both because such events are super cool to watch and because they do not happen very often." 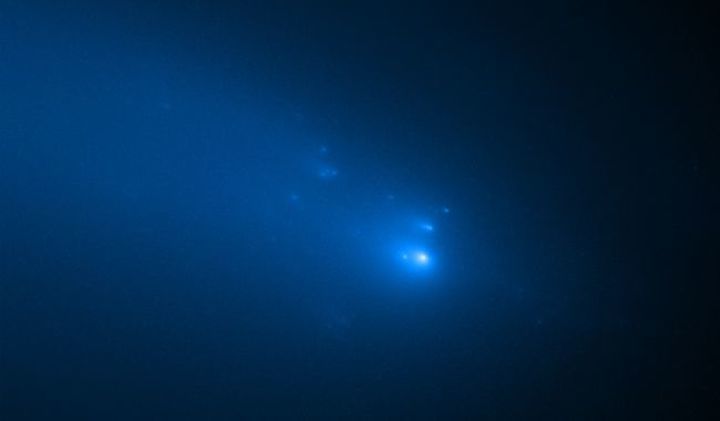 Comet ATLAS (formally known as C/2019 Y4) has disintegrated before our very eyes, and two new images from the Hubble Space Telescope show the comet has crumbled into 25 pieces.

After the comet was discovered on Dec. 29, 2019 by the ATLAS (Asteroid Terrestrial-impact Last Alert System) robotic survey system, it started to quickly brighten. However, in mid-March the comet started to abruptly dim and, as ATLAS later confirmed, its icy core started to break apart and disintegrate 91 million miles (146 million kilometers) from Earth.

Incredibly, Hubble was able to capture this comet's demise. On April 20, Hubble observed 30 fragments from the comet and, just a few days later on April 23, it spotted only 25 pieces.

"Their appearance changes substantially between the two days, so much so that it's quite difficult to connect the dots," David Jewitt, professor of planetary science and astronomy at the University of California, Los Angeles (UCLA) and leader of one of two teams that photographed Comet Atlas with Hubble, said in a NASA statement. "I don't know whether this is because the individual pieces are flashing on and off as they reflect sunlight, acting like twinkling lights on a Christmas tree, or because different fragments appear on different days."

"This is really exciting — both because such events are super cool to watch and because they do not happen very often," Quanzhi Ye, of the University of Maryland and the leader of a second Hubble observing team, said in the same statement. "Most comets that fragment are too dim to see. Events at such scale only happen once or twice a decade," she added.

But these observations have, in addition to showing the breakup of a comet in incredible detail, also helped scientists to better understand comets and how and why they break apart. In studying these observations, researchers have found that comets may break apart in this way more commonly than previously thought, according to the statement. 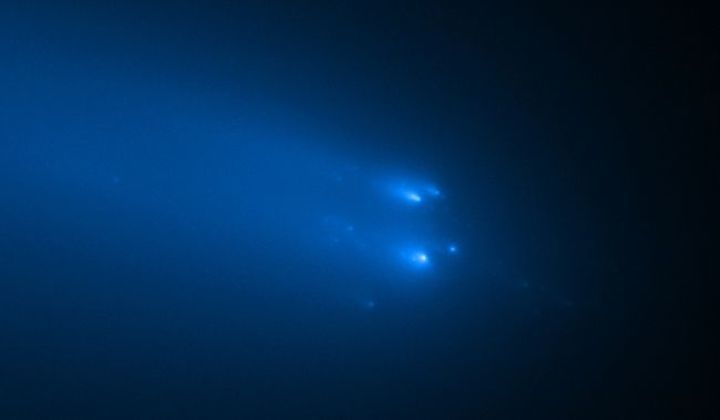 As the comet was brightening earlier this year, people were excited because, if it continued to glow brighter, it could have been visible to the naked eye during its closest approach to Earth on May 23, during which the comet is expected to fly within 72 million miles (116 million kilometers) of our planet. If any pieces of it remain, they should still make this close approach.

Earlier this month, on April 24, Hubble celebrated 30 years of being in space. The space telescope has made over 1.4 million observations in those 30 years, spotting and imaging over 47,000 objects in the cosmos. It has led to a multitude of incredible discoveries, including the discovery of dark energy, and its images have opened humankind's eyes to just how beautiful our universe really is.