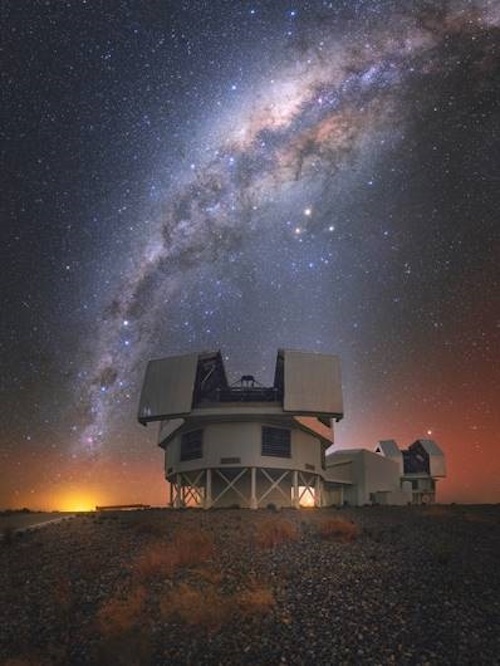 The Magellan telescopes at Carnegie’s Las Campanas Observatory in Chile, which were crucial to the ability to conduct this survey. Photograph by Yuri Beletsky, courtesy of the Carnegie Institution for Science.

Pasadena, CA— The universe is full of billions of galaxies—but their distribution across space is far from uniform. Why do we see so much structure in the universe today and how did it all form and grow?

A 10-year survey of tens of thousands of galaxies made using the Magellan Baade Telescope at Carnegie’s Las Campanas Observatory in Chile provided a new approach to answering this fundamental mystery. The results, led by Carnegie’s Daniel Kelson, are published in Monthly Notices of the Royal Astronomical Society.

“How do you describe the indescribable?” asks Kelson. “By taking an entirely new approach to the problem.”

“Our tactic provides new—and intuitive—insights into how gravity drove the growth of structure from the universe’s earliest times,” said co-author Andrew Benson. “This is a direct, observation-based test of one of the pillars of cosmology.”

The Carnegie-Spitzer-IMACS Redshift Survey was designed to study the relationship between galaxy growth and the surrounding environment over the last 9 billion years, when modern galaxies’ appearances were defined.

The first galaxies were formed a few hundred million years after the Big Bang, which started the universe as a hot, murky soup of extremely energetic particles.  As this material expanded outward from the initial explosion, it cooled, and the particles coalesced into neutral hydrogen gas. Some patches were denser than others and, eventually, their gravity overcame the universe’s outward trajectory and the material collapsed inward, forming the first clumps of structure in the cosmos.

The density differences that allowed for structures both large and small to form in some places and not in others have been a longstanding topic of fascination. But until now, astronomers’ abilities to model how structure grew in the universe over the last 13 billion years faced mathematical limitations.

“The gravitational interactions occurring between all the particles in the universe are too complex to explain with simple mathematics,” Benson said.

So, astronomers either used mathematical approximations—which compromised the accuracy of their models—or large computer simulations that numerically model all the interactions between galaxies, but not all the interactions occurring between all of the particles, which was considered too complicated.

“A key goal of our survey was to count up the mass present in stars found in an enormous selection of distant galaxies and then use this information to formulate a new approach to understanding how structure formed in the universe,” Kelson explained.

The research team—which also included Carnegie’s Louis Abramson, Shannon Patel, Stephen Shectman, Alan Dressler, Patrick McCarthy, and John S. Mulchaey, as well as Rik Williams , now of Uber Technologies—demonstrated for the first time that the growth of individual proto-structures can be calculated and then averaged over all of space.

They were then able to work backward and determine the original distributions and growth rates of the fluctuations in density, which would eventually become the large-scale structures that determined the distributions of galaxies we see today.

In essence, their work provided a simple, yet accurate, description of why and how density fluctuations grow the way they do in the real universe, as well as in the computational-based work that underpins our understanding of the universe’s infancy.

“And it’s just so simple, with a real elegance to it,” added Kelson.

The findings would not have been possible without the allocation of an extraordinary number of observing nights at Las Campanas.

“Many institutions wouldn’t have had the capacity to take on a project of this scope on their own,” said Observatories Director John Mulchaey. “But thanks to our Magellan Telescopes, we were able to execute this survey and create this novel approach to answering a classic question."

“While there’s no doubt that this project required the resources of an institution like Carnegie, our work also could not have happened without the tremendous number of additional infrared images that we were able to obtain at Kitt Peak and Cerro Tololo, which are both part of the NSF’s National Optical-Infrared Astronomy Research Laboratory,” Kelson added.

Why is the distribution of structure in the cosmos not uniform? The universe’s first structure originated when some of the material flung outward by the Big Bang overcame its trajectory and collapsed on itself, forming clumps. A team of Carnegie researchers showed that denser clumps of matter grew faster, and less-dense clumps grew more slowly. The group’s data revealed the distribution of density in the universe over the last 9 billion years. (On the illustration, violet represents low-density regions and red represents high-density regions.) Working backward in time, their findings reveal the density fluctuations (far right, in purple and blue) that created the universe’s earliest structure. This aligns with what we know about the ancient universe from the afterglow of the Big Bang, called the Cosmic Microwave Background (far right in yellow and green). The researchers achieved their results by surveying the distances and masses of nearly 100,000 galaxies, going back to a time when the universe was only 4.5 billion years old. About 35,000 of the galaxies studied by the Carnegie-Spitzer-IMACS Redshift Survey are represented here as small spheres. The illustration is courtesy of Daniel Kelson. CMB data is based on observations obtained with Planck, an ESA science mission with instruments and contributions directly funded by ESA Member States, NASA, and Canada.