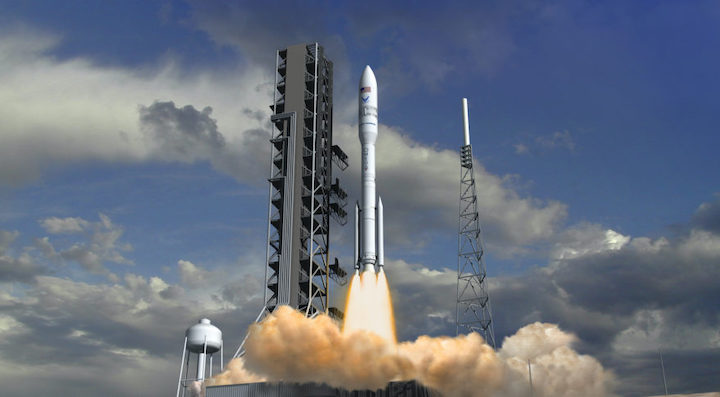 WASHINGTON — After reviewing the results of first and second stage tests of the OmegA rocket, Northrop Grumman says the vehicle is ready to move forward to its next phase of preparation for a debut flight in 2021.

Both static fires “as well as other subsystem testing, completes all Common Boost Segment motor testing prior to the first flight of the intermediate configuration of the OmegA launch vehicle,” Northrop Grumman said in a test report the company plans to release April 27.

The first and second stages of the OmegA rocket, named C600 and C300 respectively, use a large diameter case known as the Common Boost Segment that the company developed under a U.S. Air Force Launch Service Agreement contract. Northrop Grumman is one of four companies competing for two contracts to be awarded later this year by the U.S. Space Force to provide launch services for five years starting in 2022.

The company said data from first and second stage test fires supports “continued production of the remaining CBS hardware for OmegA’s certification flights in 2021.” The program now has “two critical data points for qualification of all common elements of the motor family.”

Due to the commonality of the two motors, says the report, “the successful ‘hot’ C600 test and ‘cold’ C300 test complete all first and second stage testing prior to first flight.”

The report says the company made design changes to the engine exit cone as a result of an anomaly near the end of the first stage static fire when the engine’s nozzle appeared to shatter into pieces.

“During the C600 static test in May 2019, a nozzle exit cone breakup occurred at motor shutdown,” said the report. “While this was caused by a ground test phenomenon that would not have occurred in flight, Northrop Grumman made a design change to stiffen the aft exit cone while keeping it very light. Based on C600 test data, the team also made adjustments to the contour and thick ness of the insulation on the nozzle.”

Between now and OmegA’s first launch in the spring of 2021, Northrop Grumman will test fairing separation, perform pressurized tests of liquid hydrogen and liquid oxygen tanks, and conduct a test of the complete upper stage at NASA’s Plum Brook Station in Ohio, a company spokeswoman told SpaceNews. “Additionally we will be doing pathfinder activities at Kennedy Space Center this fall.”