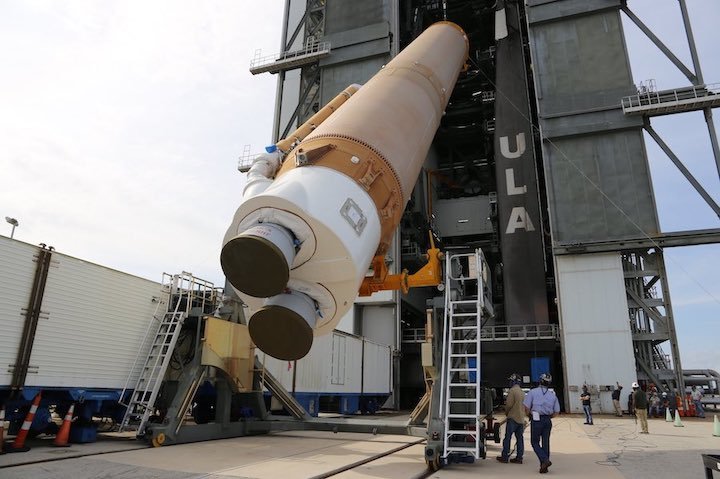 United Launch Alliance technicians raised the first stage of the company’s next Atlas 5 rocket onto a mobile launch platform at Cape Canaveral Thursday, kicking off the launch vehicle’s build-up for a mission scheduled for liftoff May 16 with the U.S. military’s X-37B spaceplane.

The Atlas 5’s 107-foot-tall (32.6-meter) cylindrical bronze first stage was transferred to ULA’s Vertical Integration Facility early Thursday and hoisted upright by a crane. Fitted with a Russian-made RD-180 main engine, the rocket was moved over the mobile launch platform inside the vertical hangar, then lowered into position on the platform’s deck.

ULA’s ground team will next add the Atlas 5’s Centaur upper stage, which has been outfitted with the Atlas 5’s interstage adapter and the lower portion of the rocket’s aerodynamic payload fairing. The elements will be stacked on top of the Atlas 5 first stage in one piece.

Then teams will put the Atlas 5 through a series of functional checkouts and testing before stacking of the rocket’s payload early next month.

The U.S. Space Force’s X-37B unpiloted spaceplane will be the Atlas 5’s passenger. Liftoff is scheduled for May 16, according to Col. Robert Bongiovi, head of the Space and Missile Systems Center’s launch enterprise division.

The target launch date has moved up four days from the earlier schedule of May 20. A launch time for the mission has not been announced.

Formerly codenamed AFSPC-7, the mission has been re-designated USSF-7 to reflect the establishment of the U.S. Space Force last December.

The military has two X-37B spaceplanes in in its inventory. Built by Boeing, the reusable winged vehicles are designed to take off on top of conventional rockets, operate in Earth orbit for years at a time, then re-enter the atmosphere and land on a runway.

The X-37B spaceplane — also called the the Orbital Test Vehicle — is shaped like a mini-space shuttle. The robotic spaceship flies without a crew, and can carry experiments, small satellites and other payloads inside a cargo bay the size of the bed of a pickup truck.

The mission scheduled for launch May 16 will mark the sixth flight of an X-37B spaceplane since 2010. The most recent X-37B mission concluded with a landing at the Kennedy Space Center on Oct. 27, wrapping up a flight that lasted more than two years.

Four of the X-37B missions have launched on top of Atlas 5 rockets, and one has launched on a SpaceX Falcon 9 rocket.

The experiments on the sixth X-37B mission have not been disclosed by Space Force officials.

“The primary objectives of the X-37B are twofold: Reusable spacecraft technologies for America’s future in space and operating experiments which can be returned to, and examined, on Earth,” officials wrote in the military’s X-37B fact sheet.

“The distinctive ability to test new systems in space and return them to Earth is unique to the X-37B program and enables the U.S. to more efficiently and effectively develop space capabilities necessary to maintain superiority in the space domain,” the military said in a press release last October announcing the landing of the fifth X-37B mission.

The Atlas 5 rocket that will carry the X-37B spaceship into orbit will fly in the “501” configuration with 17.7-foot-diameter (5.4-meter) payload shroud made by RUAG Space, no strap-on solid rocket boosters, and a Centaur upper stage with a single Aerojet Rocketdyne RL10 engine.