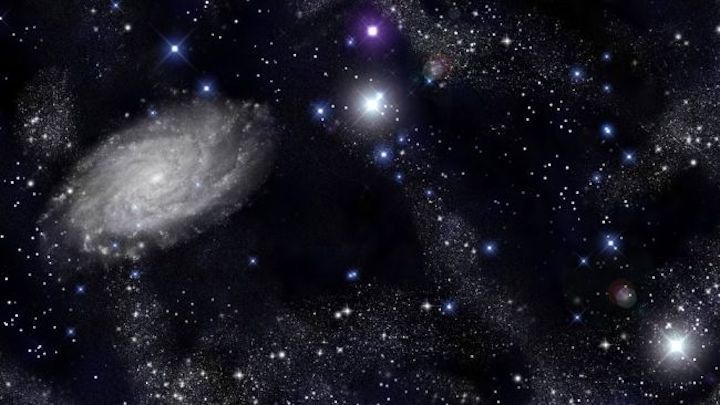 Scientists suspect that the complex life that slithers and crawls through every nook and cranny on Earth emerged from a random shuffling of non-living matter that ultimately spit out the building blocks of life.

Even so, the details to support the idea are lacking.

But researchers recently got creative in figuring out the probability of life actually emerging spontaneously from such inorganic matter — a process called abiogenesis.

In the study, Tomonori Totani, a professor of astrophysics at the University of Tokyo, modeled the microscopic world of molecules across the epic scale of the entire universe to see if abiogenesis is a likely candidate for the origin of life. He was essentially looking at whether there were enough stars with habitable planets in the universe at the time to allow complexity to arise. His results, published Feb. 3 in the journal Nature, show the betting odds for life emerging are not good, at least for the observable universe.

"I hoped to find at least one realistic path of abiogenesis, to explain abiogenesis by words of science," Totani told Live Science. "Sometimes people claim that abiogenesis probability is incredibly low and that the origin of life cannot be understood by science. I, as a scientist, dreamed to find a scientific explanation of why we are here."

Totani's study looks at a leading hypothesis for abiogenesis, that life as we know it began in what researchers call an RNA world. This hypothesis suggests that before the evolution of proteins and the double-stranded genetic molecule called DNA, or deoxyribonucleic acid — which today provides the instructions for life on Earth — the world was dominated by similar but less efficient molecules called RNA, or ribonucleic acid.

In an RNA world, RNA was the first molecule capable of copying and storing information, and of starting and accelerating chemical reactions — two essential characteristics of life on Earth. This world would be a more primitive molecular world to the DNA-protein based chemistry that defines life today.

So, how would these RNA molecules made up of at least 40 to 60 nucleotides have popped up on their own? Nucleotides have been shown experimentally to randomly organize into RNA given enough time and under the right conditions. But these experiments show that the abundance of RNA rapidly decreases with the length of their chains and none of the experiments could consistently produce strands longer than 10 monomers.

"It has been experimentally confirmed that RNA polymerization can occur by a basic random process," Totani said. "Some experiments claimed that more than 50 (monomer long) RNA were produced, but these are not reproducible. One problem is that aggregates are easily mistaken for a long RNA polymer."

Totani's model uses the most conservative method of RNA polymerization, where each monomer is attached randomly one-by-one until a chain of monomers is formed. Scientists have suggested that polymers (each made up of multiple monomers) could attach to each other to speed up the process, but Totani said such a process is "highly speculative and hypothetical."

Life as we know it

Scientists think life emerged on Earth around 500 million years after the planet formed. Given that there are an estimated 10 sextillion (10^22) stars in the observable universe, it may seem that the odds of life popping up in the universe should be good. But researchers have found that the random formation of RNA with a length greater than 40 is incredibly unlikely given the number of stars — with habitable planets — in our cosmic neighborhood. There are too few stars with habitable planets in the observable universe for abiogenesis to occur within the timeframe of life emerging on Earth.

"However, there is more to the universe than the observable," Totani said in a statement. "In contemporary cosmology, it is agreed the universe underwent a period of rapid inflation, producing a vast region of expansion beyond the horizon of what we can directly observe. Factoring this greater volume [of stars with habitable planets] into models of abiogenesis hugely increases the chances of life occurring."

After our universe flashed into existence some 13.8 billion years ago during the Big Bang, it underwent a period of rapid expansion that continues today. If we think of the universe as a loaf of bread baking in the oven, our observable universe is like a bubble of air trapped in the dough, where the walls of the bubble are the farthest distance light can travel since the Big Bang. As the loaf rises (inflation), our bubble grows while other pockets of air within the bread get farther away. Our observable bubble of air is all that we can see, even though the rest of the loaf is out there.

It is estimated that the whole universe could contain more than 1 googol (10^100) stars. When Totani factored in this new abundance of stars, he found that the emergence of life was no longer improbable, but very likely.

This may be good news for the RNA world hypothesis, though it could also mean that the search for life in the universe is a hopeless pursuit.

If life first got its start in RNA, "life on Earth was created by a very rare chance of producing a long RNA polymer," said Totani. "Most likely, Earth is the only planet harboring life in the observable universe. I predict that future observations or explorations of extraterrestrial life will yield no positive results.

If by chance, life is discovered elsewhere in our cosmic neighborhood, Totani believes it would likely be of the same origin as life on Earth. Life may have hitched a ride from comets and asteroids across interplanetary or interstellar space, seeding the local universe with life from a single origin event.

Totani's work is far from an answer to one of science's most existential questions but it may guide further research on the origins of life. Whether we are alone in the universe still remains unanswered, but if Totani's numbers tell us anything, you shouldn't bet on it.