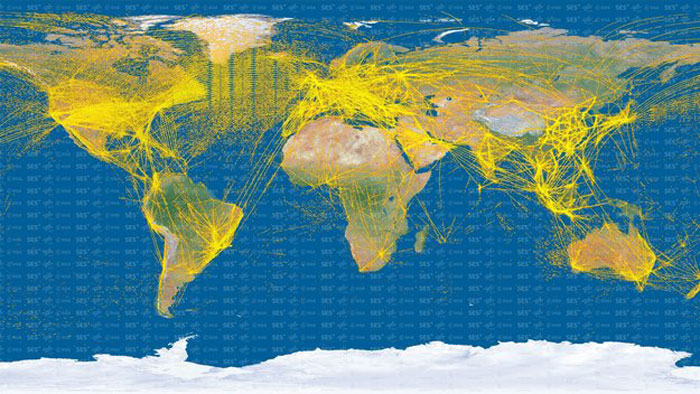 As ESA’s Proba-V works quietly on its main task of monitoring vegetation growth across Earth, the minisatellite is also picking up something from a little higher: signals from thousands of aircraft.
Launched two years ago today, Proba-V has picked up upwards of 25 million positions from more than 15 000 separate aircraft.
This is a technical world-first, demonstrating the feasibility of follow-on orbital constellations now being readied for operational aircraft monitoring.
“We stay operational 24 hours per day, seven days per week, apart from occasional maintenance or upgrading,” explains Toni Delovski of the DLR German Aerospace Center, overseeing the experiment.
“We’ve shown that detection of aircraft can work from space with no showstoppers, despite the fact that these signals were never designed to be picked up from so far away.
“In fact, the signals are beamed sideways from their host aircraft rather than omidirectionally, making them harder to detect from orbit.
“With a single satellite, our detection footprint is relatively small – about 1500 x 750 km – but for an operational service a constellation of satellites is envisaged to provide worldwide coverage.”
Smaller than a cubic metre, Proba-V is nonetheless carrying several technology experiments as well as its main wide-swath Vegetation camera, which tracks changes in plant growth across the entire planet every two days.
DLR and Luxembourg’s SES company added an experiment to detect Automatic Dependent Surveillance Broadcast (ADS-B) aircraft signals from space.
These signals are regularly broadcast from aircraft, giving flight information such as speed, position and altitude. All aircraft entering European airspace are envisaged to carry ADS-B in the coming years.
DLR contributed the receiver carried aboard Proba-V, while SES has provided the experiment's ground segment, encompassing the processing needed to decode the signals, including compensating for factors such as frequency-shifting caused by the motion of Proba-V relative to the aircraft.
“The focus of the experiment is on the large parts of the world without radar and less dense air traffic,” adds Toni.
“In the event, we have also had very good detections in the much more densely trafficked airspace of the US, Western Europe and Southeast Asia.”
In those parts of the world with radar coverage, air traffic controllers can shepherd aircraft very precisely, with separation distances down to 5.5–9 km.
However in the rest of the world, such as over the Atlantic, minimum separation distance goes up by a factor of 10, to 93 km.
Space-based ADS-B offers a method of safely reducing separation distances everywhere, increasing global air traffic capacity while improving safety.
DLR and SES are working with national air navigation service providers in Australia, Iceland, Portugal and Namibia to check Proba-V observations against the facts on the ground.
“We are still working to improve the system, with ongoing software upgrades, and investigating anomalies,” Toni adds. “Right now, some makes of aircraft are more easily detected than others, which typically comes down to the age and make of their ADS-B systems.”
An operational ADS-B detection system is being hosted on the IridumNEXT constellation, while SES is working with ESA to determine the market for a European version.
“If ADS-B from space is going to enter use on an operational, internationally certified basis, then we will certainly need a minimum of two systems,” Toni concludes.
“We couldn’t have a situation where the sole service suddenly goes down, and aircraft in the middle of the ocean need to spread out.”
Quelle: ESA
----
Update: 22.04.2020
.

ESA’s cubic-metre-sized Proba-V minisatellite will soon end its nearly seven-year global mission to monitor the daily growth of all Earth’s vegetation. As Copernicus Sentinel-3 takes on this task instead, Proba-V will be free to perform experimental monitoring over Europe and Africa – including co-observations with new companion missions.

Despite its small size, Proba-V maintains a continent-spanning perspective: its main Vegetation imager has a 2250-km wide swath. This enables it to cover nearly the entire vegetated surface of the globe every day. Allowing for cloud cover, the mission builds up a complete snapshot of global plant growth every 10 days. Overall, the mission has acquired more than a petabyte of environmental data during its time in orbit.

Proba-V's extremely wide view comes about because Vegetation is made up of three separate imaging telescopes, possessing 300 m spatial resolution, which rises to 100 m resolution in the central telescope – a marked improvement on the previous generation of Vegetation instruments.

“It started with a two-year mission lifetime, which was repeatedly extended, and the satellite remains in excellent overall health. So even though its global mission is due to end this June, shortly after its seventh birthday, the plan is to let it go on working.”

Proba-V was launched into what is called a ‘Sun-synchronous’ orbit, where it keeps pace with the Sun as it circles Earth at 820 km altitude, allowing it the maximum possible observing daylight. This orbit is gradually decaying however, and the minisatellite lacks onboard thrusters to correct it. Tugged by the gravitational pull of Earth’s equatorial bulge, its observing time is gradually growing earlier in the local morning.

“Basically one of the cameras on Proba-V will soon be observing night-time rather than daylight, meaning it cannot go on delivering daily global coverage anymore to continue the 20 year plus Vegetation time series, so its operational global mission has to end,” comments Dennis Clarijs of VITO, the Belgian research and service centre processing and distributing Proba-V data to users.

“But this isn’t the end of the mission. Instead ESA will be applying its excellent geometric and radiometric performance to make test observations in Europe and Africa, particularly the African Sahel where its results help provide early drought warnings.

“This means the more than 1800 research teams making use of Proba-V data today still have more data to look forward to, albeit on an experimental rather than operational basis. This is good because its 100-m imagery fills a particular niche, as a midway step between Copernicus Sentinel-2 and -3, able to resolve individual field delineations in some cases. Proba-V’s 100-m imagery is also routinely used to cross-check other products, such as the Copernicus Global Land Service.”

Proba-V will also be increasing its observations of the Moon. It is not generally known, but many Earth observation satellites routinely observe our planet’s natural satellite along with Earth itself: the unchanging state of the lunar surface makes it an excellent calibration target.

In the past Proba-V made such lunar acquisitions on a monthly basis. Now the minisatellite will increase them, experimenting with changing frequencies and view angles for the benefit of future Earth-observing missions.

In addition, the plan is to launch in 2021 an additional tiny satellite carrying a single telescope version of the same Vegetation imager aboard Proba-V. This mission is being developed through ESA's General Support Technology Programme, backing advanced technologies for space testing, which also supported the development of Proba-V itself.

Roberto comments: “This companion mission is currently being developed by Belgian startup Aerospace Lab for launch next year. Based on a tiny 12-unit CubeSat  - built up from standardised 10 cm cubic units –  it will image  the same targets as Proba-V areas at the same time except from a different viewing angle, allowing the creation of combined ‘fusion’ image products.

“A major motive behind the original Proba-V mission was to see if an instrument previously hosted on a full-sized satellite could do good work from a smaller platform. With this companion satellite we will raise the bar, using an even smaller, cheaper platform.”

Another companion satellite is also being planned, to host either a thermal infrared imager or an hyperspectral instrument, both of which would offer valuable synergies with Vegetation observations, and test the feasibility of small satellite constellations entering operations in future.

Proba-V’s orbital decay will finally bring it into complete darkness in October 2021, when it will either be shut down, or placed in suspended animation, awaiting a time when its orbit brings it into daylight again.

“There is a precedent for such an arrangement,” adds Roberto, “with predecessor mission Proba-1, launched back in 2001, hosting a hyperspectral camera. Having passed through such a period of orbital darkness it is still observing to this day.”

The next in the series of Proba technology-testing missions will be Proba-3, a double satellite mission to demonstrate precision formation flying while studying the surrounding corona of the Sun, due to fly in 2022.