Having detailed land cover information is important for a better understanding of our environment - for example, to estimate ecosystem services such as pollination or to quantify nitrate and nutrient inputs in water bodies. This information is increasingly obtained from satellite images with high temporal and spatial resolution. However, clouds often prevent the view from space to the earth’s surface. The dynamic use of machine learning models can take this local cloud cover into account without resorting to commonly used interpolation methods. This is shown by UFZ scientists in a study published in the journal Remote Sensing of Environment. Their algorithm recognises 19 different types of crops, accurate to 88 percent. 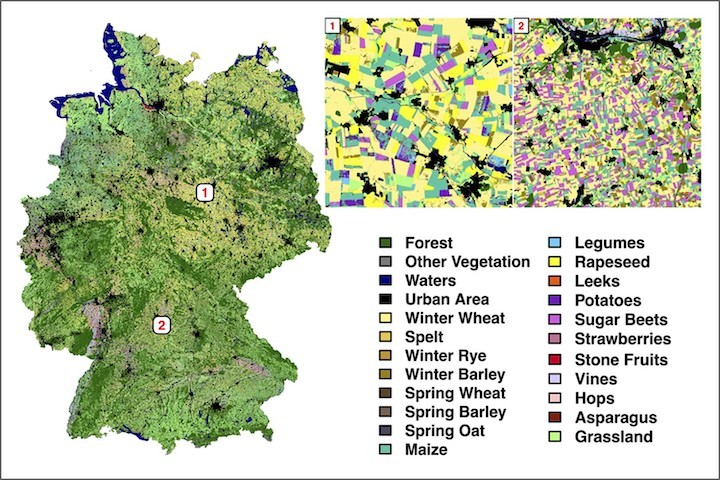 "If we can determine the cultivated crop for each agricultural field, we can draw conclusions not only about nutrient requirements but also about the nitrate load of surrounding waters," explains Sebastian Preidl, scientist in the Landscape Ecology department at UFZ. The information could also be used, for example, to better initiate actions to protect wild bee populations. "We can only protect a region’s biological diversity effectively if we have a clear picture of the spatial land cover distribution," explains Preidl.

Earth observation satellites of the Copernicus program founded by the European Space Agency (ESA) provide high-resolution data in time and space and enable continuous monitoring of the land surface on an ecologically relevant scale. Sentinel-2 satellite images captured at regular time intervals in 9 spectral bands formed the basis for Preidl’s work. From these spectral time series, researchers can derive land cover information for their study area.

Cloud occurrence is a major challenge when dealing with time series of optical satellite data. Despite numerous satellite images, frequent cloud cover can lead to larger data gaps in the spectral time series.  At the same time, a sufficient number of pixels (observations) is required for many plant growth phases to assign the recorded spectral signatures to the corresponding plant species.
These gaps are usually filled by artificially generated data that are interpolated from cloud-free image pixels. "Instead of doing this, we opt for a dynamic application of machine learning models. This means we are generating customised algorithms for every pixel," says Preidl. "Our algorithm automatically selects cloud-free pixels from the entire satellite image dataset and is not dependent on large-scale cloud-free scenes. To assign a specific crop type to each image pixel, the temporal sequence of cloud-free observations at pixel level is taken into account by a large number of models."

Based on information provided by the federal states, the crop type cultivated is known only for selected agricultural fields. This knowledge is used to train the UFZ models to distinguish between maize and wheat, for example. To determine land cover of the total agricultural area, the scientists have divided Germany into six landscape regions. "Different crops are grown in the 'Magdeburger Börde’ than in the 'Rheingau’," explains Preidl. "Moreover, one and the same crop species grows differently in the 'Breisgau’ than in the 'Uckermark’. Climate and altitude make a big difference." The result: the researchers’ algorithm achieves an accuracy of 88% in identifying 19 different crop types. For the main crops, the success rate is over 90%. At first for the year 2016, they created a land cover map of Germany's agricultural area using around 7000 satellite images. In addition to this map, UFZ researcher can also provide information about the model performance, i.e. the accuracy with which the algorithm detects the plant species for a given pixel.

But the UFZ approach can be exploited in many other ways. In a project with the German Federal Agency for Nature Conservation (BfN), instead of wheat and maize, Preidl’s algorithms also distinguish spruce, beech and other tree species. In this way he is investigating how the nature conservation value of forests can be determined using satellite data. "If we know which tree species predominate in a forest area over time, the effects of storm events, drought damage or pest infestation can be better assessed. A resilient forest is economically and ecologically highly relevant in terms of the sustainable development goals," says Preidl.

"Our methodology can be applied to other regions within and outside Europe, and to other years, by taking into account the respective relevant temporal sequence of cloud-free observations and land use," says Dr Daniel Doktor, head of the Remote Sensing working group of the Department Computational Landscape Ecology at the UFZ, outlining the next steps. "If this methodology is combined with other models - for example on phenology or ecology - statements can be made not only on species-specific vulnerability to extreme events such as droughts, but also on the future behaviour of ecosystems as carbon sources or sinks," explains Doktor.