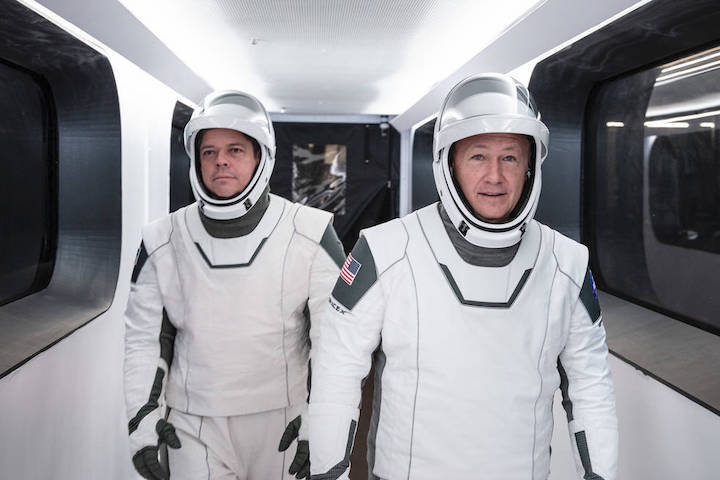 With the first mission to return human spaceflight launches to American soil now targeted to lift off May 27, NASA will highlight the historic flight with a series of news conferences Friday, May 1, that will air live on NASA Television and the agency’s website. In addition, NASA astronauts Robert Behnken and Douglas Hurley, who will serve as crew for the mission, will be available for remote interviews.

NASA’s Johnson Space Center in Houston will host a trio of media briefings beginning at 11 a.m. EDT May 1, to preview NASA’s SpaceX Demo-2 mission. The flight test with NASA astronauts aboard SpaceX’s Crew Dragon spacecraft will lift off on a Falcon 9 rocket to the International Space Station from NASA’s Kennedy Space Center in Florida.

All media participation in these news conferences and interviews will be remote; no media will be accommodated at any NASA site due to the COVID-19 pandemic. To participate in the briefings by phone or to request a remote interview with the crew members, reporters must email jsccommu@mail.nasa.gov no later than 5 p.m. Tuesday, April 28.

The May 1 briefings and participants include (all times EDT):

Following a May 27 launch, Behnken and Hurley are scheduled to arrive at the space station May 28 to join Expedition 63 commander Chris Cassidy of NASA and flight engineers Anatoly Ivanishin and Ivan Vagner of the Russian space agency Roscosmos.

Behnken will be the joint operations commander for the Demo-2 mission, responsible for activities such as rendezvous, docking and undocking, as well as Demo-2 activities while the spacecraft is docked to the space station. Selected as a NASA astronaut in 2000, Behnken completed two space shuttle flights. He flew on STS-123 in March 2008 and STS-130 in February 2010 and conducted three spacewalks during each mission. Born in St. Anne, Missouri, he has bachelor’s degrees in physics and mechanical engineering from Washington University in St. Louis and earned a master’s and doctorate in mechanical engineering from the California Institute of Technology. Before joining NASA, Behnken was a flight test engineer with the U.S. Air Force.

Hurley will be the spacecraft commander for Demo-2, responsible for activities such as launch, landing and recovery. Selected as an astronaut in 2000, Hurley has completed two spaceflights. He served as pilot and lead robotics operator for both STS‐127 in July 2009 and STS‐135, the final space shuttle mission, in July 2011. The New York native was born in Endicott, but considers Apalachin his hometown. He holds a Bachelor of Science degree in civil engineering from Tulane University in Louisiana and graduated from the U.S. Naval Test Pilot School in Patuxent River, Maryland. Before joining NASA, he was a fighter pilot and test pilot in the U.S. Marine Corps.