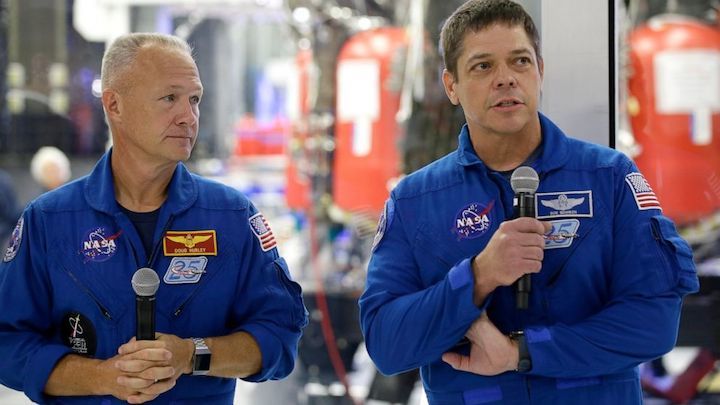 n this Thursday, Oct. 10, 2019 file photo, NASA astronauts Bob Behnken, right, and Doug Hurley talk to the media in front of the Crew Dragon spacecraft at SpaceX headquarters in Hawthorne, Calif. On Friday, April 17, 2020, NASA and SpaceX announced May 27 for resuming human launches from the U.S. after nearly a decade. Hurley and Behnken will blast off atop a SpaceX Falcon 9 rocket, departing from the same Kennedy Space Center launch pad used by Atlantis in July 2011. (AP Photo/Alex Gallardo)

CAPE CANAVERAL, Fla. -- NASA and SpaceX have picked May 27 for resuming astronaut launches from the U.S. after nine years of complete Russian dependence.

“On May 27, @NASA will once again launch American astronauts on American rockets from American soil!” Bridenstine tweeted.

Astronauts Doug Hurley and Bob Behnken will blast off atop a SpaceX Falcon 9 rocket, departing from the same Kennedy Space Center launch pad used by shuttle Atlantis in July 2011, as well as the Apollo moonshots a half-century ago. Hurley served as pilot on that last shuttle mission and will be the spacecraft commander for SpaceX's Dragon crew capsule.

Launch day will be a Wednesday, with a liftoff time of 4:32 p.m. EDT. It's too soon to know whether the coronavirus pandemic will prompt crowd restrictions.

Only three countries have launched people into orbit since 1961: Russia, the U.S. and China, in that order. SpaceX would be the first company.

SpaceX successfully conducted its first test flight of a Dragon crew capsule a year ago, sending the capsule — minus a crew — to the space station. The returned capsule was accidentally destroyed during ground testing at Cape Canaveral, further delaying the astronaut launch.

With the space station crew now down to three, Hurley and Behnken will spend weeks, perhaps months, helping to maintain the orbiting lab. The length of their mission is still under review, according to NASA.

NASA, meanwhile, is in the process of buying another seat on a Russian rocket. Russian Soyuz capsules have been the sole means of crew transportation to and from the space station since 2011.

SpaceX has been using Falcon 9 rockets to launch cargo to the space station in the company’s original Dragon capsules since 2012. NASA turned to private companies for deliveries once the shuttle program ended.

Boeing also is working to launch astronauts under NASA's commercial crew program, but the company's effort suffered a serious setback following last December's botched test flight. Launching without anyone on board, Boeing's Starliner capsule failed to reach the space station after ending up in the wrong orbit and came close to destruction twice because of software errors.

Boeing plans to repeat the test flight, again without astronauts, this fall.

Despite coronavirus, NASA and SpaceX aim to launch astronauts from KSC in May

Despite the continuing threat of the coronavirus pandemic, NASA on Friday said it plans to launch astronauts from Kennedy Space Center next month, the first time it's done so in nearly a decade.

"On May 27, NASA will once again launch American astronauts on American rockets from American soil," agency administrator Jim Bridenstine announced via Twitter, finally adding specificity to a date long rumored to be in the late May timeframe.

If schedules hold, a SpaceX Falcon 9 rocket will launch from Kennedy Space Center at 4:32 p.m. with astronauts Bob Behnken and Doug Hurley on a trip to the International Space Station, a feat not accomplished since the last space shuttle flight in July 2011. Since then, American astronauts have traveled to the ISS on Russian spacecraft.

A high-profile mission like this would be prone to delays caused by any number of technical or scheduling issues, but the fact that a pandemic has swept the globe adds even more uncertainty. According to the latest estimates, Florida will likely see its peak daily coronavirus cases sometime in the first week of May.

And it raises questions about how the Space Coast will absorb launch-viewing crowds in this era of social distancing. Past crewed launches from pad 39A have drawn hundreds of thousands to beaches, roadsides, piers, restaurants and bars, and more.

But some experts see NASA's mission as just that. After nine years of work, they say, America needs to send American astronauts back to the $150 billion International Space Station directly from U.S. soil. With no vaccine likely in the near-term, they say the nation's space industry needs to adjust and start putting humans back in orbit.

NASA astronauts Bob Behnken and Doug Hurley familiarize themselves with SpaceX’s Crew Dragon, the spacecraft that will transport them to the International Space Station as part of NASA’s Commercial Crew Program.
SpaceX

Between the pandemic, upcoming hurricane season, and now crewed flight from KSC, Brevard County and city officials will be active on several fronts.

"Up until today, our big concern was 'What are we going to do as far as hurricane season planning and if we had to shelter people during a hurricane,'" said Don Walker, Brevard County communications director. "Now we're going to have to figure out what we'll do with the arrival of masses of people to our county during a pandemic or at least the rebound from one."

Launch-related crowd control isn't new to the county, however, and Walker said plans were already underway to deal with heavy traffic.

"We're not totally caught off guard because we've already been planning for the first crewed launch, but we weren't planning for it in the throes of a pandemic," he said.

Recently released guidelines by the White House could offer a blueprint to Florida Gov. Ron DeSantis when it comes to possibly easing social-distancing requirements next month, though nearby attractions like Universal Orlando have already confirmed closures through May 31. But if that timeline does hold, the launch could be a "shot in the arm" for the area, according to Space Coast Office of Tourism Executive Director Peter Cranis.

"Wouldn’t it be great if the beach parking was opened, the restaurants were reopened, and we had an ability to have people here watching the launch?" Cranis asked. "I just think that would be amazing if that timing could work out properly."

But he cautioned that the Space Coast's plan moving forward, "given the times that we're in, really remains to be seen."

South Brevard State Rep. Randy Fine, acknowledging that spaceflight is deemed an essential part of state and national business, expressed his own concerns about crowds.

"I'm disappointed that the county has taken this tourism friendly approach," Fine said. "In the middle of this crisis, I think it's a mistake to be open to coronavirus refugees."

Cocoa Beach hotelier Bob Baugher, meanwhile, welcomed the launch news, but remained skeptical as to whether the economy would reopen by the target launch date.

“We’re 40 days off. Things could change so much in 40 days. If you look back the last 40 days, things have changed so much,” Baugher said.

On the timeline, all agreed: nearly six weeks might be enough for Brevard and the state to prepare, but it's impossible to know at this point.

Nine years have elapsed since the agency's Commercial Crew Program was established to replace the shuttle's capabilities, and some experts say it's time to keep pushing forward with the mission.

"NASA has a space station to operate and we aren't de-crewing it because of the virus," said James Muncy, a Washington, D.C.-based space policy consultant. "Carrying off a first, safe Commercial Crew mission needs to happen for the nation to operate the station and to continue what we're doing in space."

"It would be better if we didn't have this pandemic and it would be better if a million people could come to Florida and fill up hotel rooms and you would get the full economic benefit of that first launch," he said. "But NASA has to keep moving in space."

Muncy added that NASA has essentially given the county and state six weeks to prepare for the launch. The sight of a 230-foot-tall Falcon 9 vaulting off the pad with astronauts, though, could be a boon for the beleaguered American public.

"I have to believe that launching the first Americans on an American rocket from American soil for the first time in nine years will be a good shot in the arm for the country," he said.

Lori Garver, former deputy administrator of NASA, said her views "evolved this week" after recognizing the pandemic could last a year or more.

"If the workforce is safe and SpaceX and NASA are ready – I agree it is a priority," she said. "The U.S. has spent about $150 billion on ISS and it can't postpone (astronaut) exchange and supplies that long."

"We overcame so much to get here," she said.