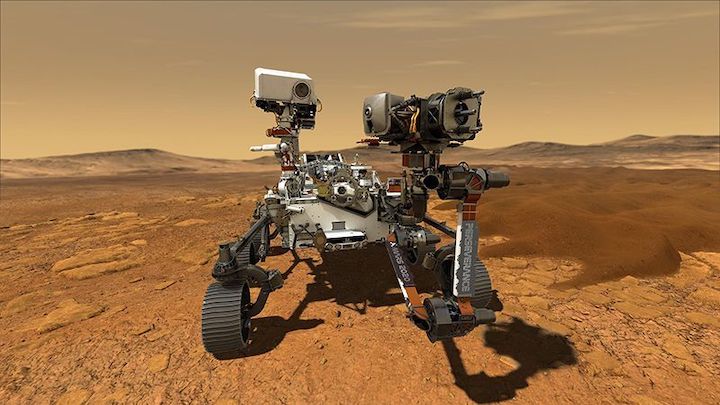 The plan to steal rocks from the surface of Mars is taking shape.

The first step in this interplanetary heist will come in July, when NASA launches its Perseverance rover to roll around on the Martian surface and collect tubes of dust and rock. Now, officials have laid out exactly how those tubes might find their way back to Earth. It’s a soaringly ambitious, sure-to-be-expensive, international endeavour that involves sending multiple spacecraft to Mars to fetch the precious samples.

If it works, scientists will finally get their hands on rocks retrieved from the Red Planet in just over 10 years. “What we can learn about Mars in our own laboratories is going to be fantastic,” said Michael Meyer, lead scientist for the Mars exploration programme at NASA headquarters in Washington DC, who outlined the plans at a virtual meeting on 15 April.

The Perseverance rover is the first stage in the process of returning a sample from Mars. If it launches as planned in the coming months, it will land next February in Jezero crater, which is home to an old river delta that could hold signs of ancient Martian life. As it drives around for many kilometers, Perseverance will drill or scoop up material to fill around 30 small geological sampling tubes.

Until now, it hasn’t been clear how those tubes might get back to Earth. But over the past few months, and after four years of designing and plotting, NASA and the European Space Agency (ESA) have finalized a plan that involves sending a pair of spacecraft to Mars in 2026.

The first spacecraft would land in Jezero crater. There, a small rover would make its way to Perseverance, pick up the filled sampling tubes and transfer them to a “Mars ascent vehicle” — essentially a small rocket with a container to carry the samples. The Mars ascent vehicle would then blast off and place the container into Martian orbit.

The second spacecraft would then manoeuvre itself next to the sample container, pick it up and fly it back to Earth. It would plummet to the ground at high speed, probably landing in a military training ground in Utah.

As simple as possible

The whole process will require many interplanetary firsts. No nation has ever launched a craft from the surface of Mars, or had two spacecraft rendezvous in Mars orbit. “This is by no means a simple task,” says Jim Watzin, head of NASA’s Mars exploration programme in Washington DC. “But we have kept it as simple as possible.”

Landing and working in Jezero crater should be easier the second time around, notes Bethany Ehlmann, a planetary geologist at the California Institute of Technology in Pasadena. Perseverance will have had years to scout out the landscape and prepare the way for the small rover to join it.

NASA and ESA have divided the work based on their experience working on Mars. NASA plans to build the sample-retrieval lander and the Mars ascent vehicle; ESA will work on the small rover and on flying the samples home. Unlike NASA, ESA has not yet sent a rover to Mars. It was due to launch one this year in a joint effort with the Russian space agency, but was forced to delay the project partly because of the coronavirus pandemic.

Watzin declined to comment on how much the whole Mars sample-return project might cost, but it is likely to require at least several billion dollars from each agency. ESA officials committed to the plan at their triennial ministerial meeting last November.

If all goes to schedule, the sample-return spacecraft will reach Mars in 2028. The small rover would do its work collecting and loading tubes during a season that is free of Martian dust storms and cold winter temperatures. After leaving Mars, the samples would land in Utah in September 2031.

NASA and ESA put out a call this month for scientists interested in helping to plan how those precious samples will be studied.

Mars-Chroniken - Revealed: How a spacecraft will bring Mars rocks to Earth NASA and the European Space Agency firm up plans to return the first samples from the Red Planet.
487 Views
Created with page4