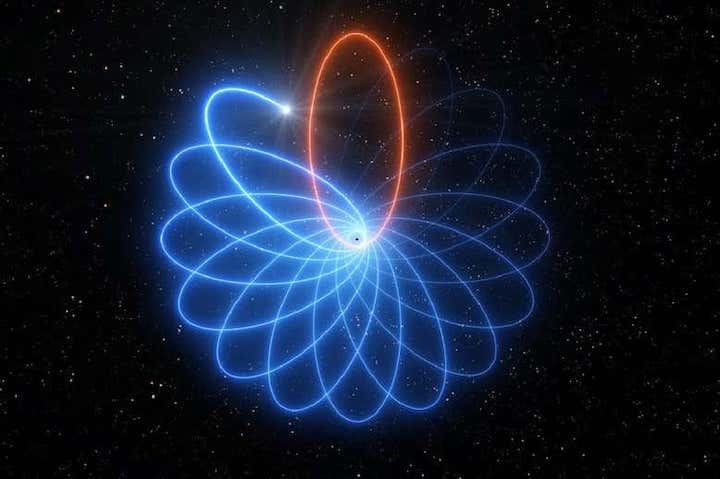 The movement of a star close to our galaxy’s supermassive black hole has proved Albert Einstein right about gravity once again. After 27 years of observation, we have finally nailed down the orbit of this star, called S2, precisely enough to spot a strange effect predicted by his general theory of relativity.

S2 circles the supermassive black hole at the centre of the Milky Way about once every 16 years. Since 1992, astronomers have been observing it with some of the most powerful telescopes on Earth to precisely trace its looping orbit.

“The precision we now have in measurements of the relative positions of the black hole and the star is comparable to watching a football game on the moon. Then you have to measure the size of the football to within of a few centimetres,” says Frank Eisenhauer at the Max Planck Institute for Extraterrestrial Physics in Germany.

He and his colleagues examined the piles of observations of S2 and found that its orbit isn’t as we would expect under Isaac Newton’s basic theory of gravity. Instead of simply following the same path on orbit after orbit, it swings around the black hole in a new direction each time, tracing out a shape that looks a bit like a daisy flower.

“Normally, if you put a star in orbit, it moves along an ellipse and the orbit closes,” says Eisenhauer. “But when the gravity is very strong, the ellipse moves from orbit to orbit and makes a rosette shape.”

This sort of movement is predicted by Einstein’s general theory of relativity, which dictates that the black hole should distort space-time around it, dragging the orbits of nearby stars as well.

It has been observed in our own solar system – Mercury’s orbit is also rosette-shaped rather than elliptical – but the effect is much more pronounced at the centre of the galaxy because the black hole is far more massive than the sun and thus stretches space-time in a more extreme way. Yet again, Einstein was right.