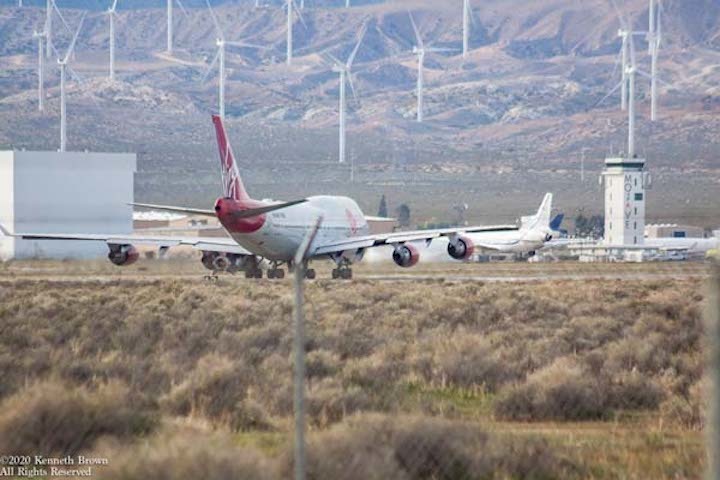 Virgin Orbit has apparently scrubbed a cryogenic captive carry flight test scheduled for today. The Cosmic Girl 747 was scheduled to take off at 10:10 a.m. PDT carrying a LauncherOne fueled with liquid nitrogen.

The aircraft would have flown over the Pacific Ocean west of the Channel Islands before landing back at the Mojave Air and Space Port after a flight test lasting about 1 hour 10 minutes.

The flight, described in a Virgin Orbit mission update below, is the last major milestone before the company attempts the maiden flight of LauncherOne.

It was the third scheduled flight of Cosmic Girl scrubbed this week. Virgin Orbit had filed flight plans for Tuesday and Friday. It appears the company has rescheduled the flight for Sunday morning.

A description of the planned flight test from Virgin Orbit follows.

MOJAVE, Calif. (Virgin Orbit PR) — After five years of hard work, our team is now ready to conduct the final test of our development program and the last major step prior to our Launch Demo. In the very near future, we will conduct a cryogenic captive carry flight with our first orbital rocket. This test will be a complete, end-to-end launch rehearsal that exercises all of our ground operations; our mission control; all of our communications systems and protocols; all of our range assets; and our carrier aircraft’s takeoff, flyout, pull-up maneuver, and return-to-base operations.

Before we tell you a bit more about the test, let’s start with a recap — because so much is happening in the world that March already feels like a million years ago.

In the early days of 2020, we wrapped up an intense campaign of in situ checkouts and launch rehearsals on our first orbital rocket. With that work completed, we moved our rocket off of a custom-built test stand and moved it to meet the rest of our launch system. We parked at the end of the primary taxiway at the Mojave Air and Space Port, just feet away from where we will begin our Launch Demo soon.

That’s the entire footprint of our mobile infrastructure in one photograph — a far cry from most traditional, ground-launched systems, and a big reason why we’ll soon be able to operate the most flexible, most responsive orbital launch service in the world.

With our full system in place — with the MegaZord united, as we jokingly say — we began running through another huge batch of fueling operations, full-team mission simulations, telemetry hand-off exercises, devilishly designed “mayhem” scenarios designed to push our team to the limits, and several rounds of important readiness reviews. None of it was terribly flashy, but it’s the kind of work that is sensible to do before debuting a brand new launch system.

And then, a global pandemic happened.

Like everyone else, COVID-19 is changing our lives and dominating our thoughts. Even as an essential business requested to remain open, we’ve made major changes to our plans, our work spaces, our procedures, and our schedules in order to keep our teammates safe and to help flatten the curve. We’ve also devoted a great deal of effort to answering the medical community’s call for a simpler, faster-to-produce ventilator. But through it all, we’ve continued the push towards our primary mission: developing the world’s most flexible and responsive launch system.

As the pandemic reached our home in California, we sent all of our staff home with full pay, giving them a week to prepare for the many changes that were to come for them and their families — and giving ourselves all the time we needed to design an entirely new way of working. Ours is an industry accustomed to dealing with hazards and to thinking thoroughly and intentionally about how to keep our people safe. We put that knowledge and training to good use here.

We reconfigured our Mission Control. We re-wrote procedures for our technicians on the shop floor and at the test site in order to meet social distancing requirements. We were already accustomed to using Personal Protective Equipment during many of our operations — but now we are ramping up our standards to match the latest guidelines from the CDC and other leading medical experts. And of course, we are spending extra time regularly sterilizing every square inch of our manufacturing facility, constantly educating our staff, and much more.

With a robust plan for safe operations in place, we began bringing essential teammates back on site — but continue to have as much as 90% of our staff working remotely.

With the steady progress of our remote work and with a few weeks of getting used to our new COVID-19 accommodations, we are now ready for the final development test of our launch program: a cryogenic captive carry flight.

Very soon, you’ll see Cosmic Girl and a fully loaded LauncherOne lift off from the main runway at the Mojave Air and Space Port, carrying our first orbital rocket for the most complete capstone test of our entire pre-launch process yet.

We’ve conducted captive carry tests in the past, including several with a fully loaded rocket. But for those tests, our tanks were full of water — which is great for testing weight and balance, but has one key difference from what’ll be in the tanks during a launch: it’s more than 300°F (185°C) warmer. Cryogenic liquids have some important differences both in how they interact with the hardware and in how they are handled by our crew. All the more reason to be extremely thorough in kicking the proverbial tires before we’re ready to launch.

So, for this end-to-end rehearsal, we’ll have liquid nitrogen — which is very similar in temperature to liquid oxygen, but which would pose less of a risk in case anything were to go wrong despite all of our planning — in our LOX tanks for both stages.

We’ve put in the work through hardware and software tests, loading and unloading sequences, and crew training rehearsals. We’ve gone through our test readiness process and are now poised to start operations soon. When the time comes, we will be very, very pleased to check the box on this final test of our development program.

Once that’s done, we’ll be nearly ready for the big kahuna, our Launch Demo. Of course, we’ll first pore over the data from this captive carry flight; and we’ll run through a few last rehearsals, giving the team a few additional chances to practice their jobs with our new COVID-19 procedures in place. But the Launch Demo will be squarely in our sights.

Our team is laser-focused and working methodically. We’re doing so with the full knowledge of the statistics behind maiden voyages of rockets. All of us in aerospace know that about half of all rockets fail on their first launch attempt. Each team of intrepid rocketeers knows that in spite of all of our hard work we can never rule out that possibility. But we are also armed with the confidence that this pursuit is worth the struggle to overcome its inherent challenges, and comforted by the knowledge that we’ll learn so much about how our system operates. We’ll build on the good and figure out where improvements are needed and why. We are doing our level best to make the day a big success — and preparing for absolutely every scenario. 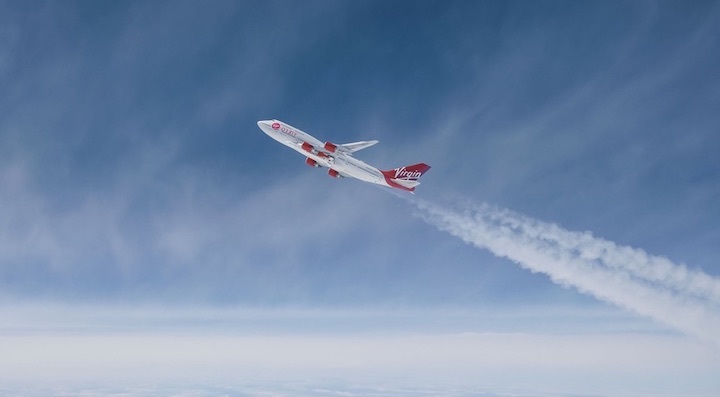 The company’s modified Boeing 747 aircraft, with a LauncherOne rocket attached to its left wing, took off from the Mojave Air and Space Port in California at 2:23 p.m. Eastern. The plan flew out over the Pacific Ocean south of Santa Barbara to simulate a launch before returning back to Mojave, with the rocket still attached, about two hours later.

Virgin Orbit had performed captive carry test flights in the past, but this was the first with a flight version of LauncherOne, filled with RP-1 fuel and liquid nitrogen, attached. During the flight, the plane tested the launch release maneuver, where the plane pulls up sharply after releasing the rocket.

In an April 10 statement, Virgin Orbit described then-upcoming flight as a “a complete, end-to-end launch rehearsal” of the aircraft and ground operations, with the exception of using liquid nitrogen, a safer alternative to the liquid oxygen propellant used for LauncherOne. That test, the company said, was also “the last major step prior to our Launch Demo,” or first orbital launch attempt.

Virgin Orbit had planned to carry out the captive carry flight earlier this year, but was delayed in part by the coronavirus pandemic. While among the many space companies considered “essential” by government agencies and thus allowed to remain open, Virgin Orbit sent its staff home with pay for a week last month both to allow them to deal with the dislocations caused by the pandemic as well as to adjust its procedures to allow for on-site operations to continue safely.

That work, Virgin Orbit said in the earlier statement, included reconfiguring its mission control center and rewriting procedures on the shop floor to comply with recommended physical distancing. It is also more frequently cleaning workspaces and increasing use of personal protective equipment. Even with those changes, the company estimates that up to 90% of its employees are still working remotely.

The captive carry test is the last major test before the company’s first launch attempt. “Of course, we’ll first pore over the data from this captive carry flight, and we’ll run through a few last rehearsals, giving the team a few additional chances to practice their jobs with our new COVID-19 procedures in place,” the company stated. “But the Launch Demo will be squarely in our sights.”

Virgin Orbit didn’t state exactly how long it would be before that orbital launch attempt could take place. Previously, company officials estimated they would be ready for the launch as soon as a couple weeks after the captive carry test flight.