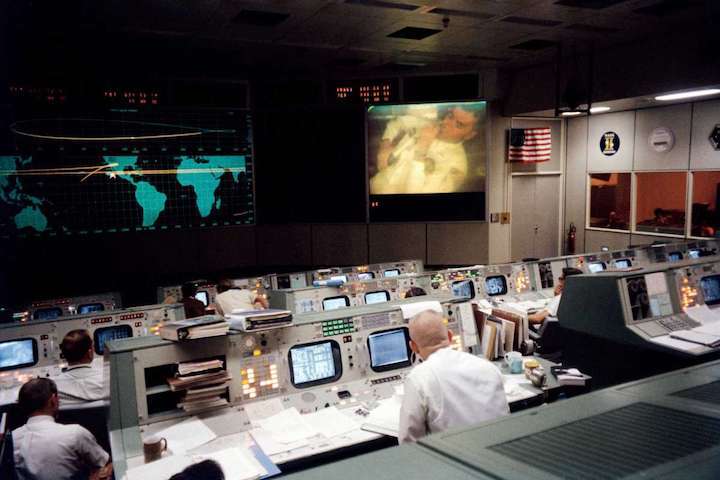 This photograph of the Mission Operations Control Room in the Mission Control Center at the Manned Spacecraft Center (now Johnson Space Center), Houston, was taken on April 13, 1970, during the fourth television transmission from the Apollo 13 mission. Eugene F. Kranz (foreground, back to camera), one of four Apollo 13 flight directors, views 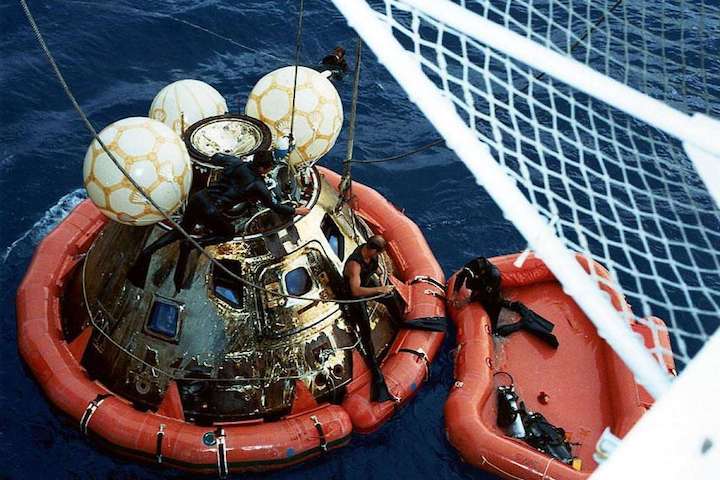 Astronaut Fred Haise heard a loud bang, like someone had hit the side of the metal spacecraft with a sledgehammer. He floated toward the instrument panel and saw a flurry of warning lights. Notably, several instruments for oxygen tank No. 2 had their needles at the bottom. At empty.

That oxygen tank had been lost. And with it, his hopes of landing on the moon.

“I was just sick to my stomach with disappointment,” Haise recalled. “Because I knew, without looking at the mission rules book, that we had an abort.”

But it quickly became clear that much more than the lunar landing was at stake in the now infamous Apollo 13 mission. The successful failure, memorialized in a movie that helped give Houston its well-worn cliché, launched 50 years ago on April 11, 1970.

Apollo 11 anniversary: Read last year’s coverage for the 50-year anniversary of landing men on the moon

Those astronauts, Haise along with Jim Lovell and Jack Swigert, never landed in the Fra Mauro area of the moon. But the lunar module was key to their survival. And Haise was pilot of that vehicle.

So as oxygen from the other tank rapidly depleted, Haise was told to turn on the lunar module. The command module that housed the crew's quarters and flight control would need to be temporarily abandoned, and the vehicle designed to land men on the moon would become their lifeboat.

There wasn’t time for the normal activation checklist. But Haise knew this lunar module, called the LM (pronounced lim). He’d spent a year at the plant where it was built and then was backup pilot for Apollo 8 and 11. So he knew he could skip landing radar, for instance, since the LM wouldn’t be landing on the moon.

The crew would spend roughly 3½ days in this lifeboat before returning to Earth. And this month, five decades later, NASA plans to unveil additional details on the modern human landing system that will return men — and the first woman — to the moon through its Artemis program.

That system will undoubtedly benefit from more advanced technology and a better understanding of space systems. But it will have big shoes to fill in terms of versatility in the face of adversity.

“They are going to have to keep it simple enough that it can be utilized in emergencies for other purposes and so forth,” said Gerry Griffin, who was a flight director on the Apollo 13 mission, “and I’m sure they’ve got that all in mind just living with the Apollo 13 experience. That the lunar module has that capability to provide services other than just landing, if it’s called on, and I suspect that’s going to be part of the design.”

Because the Apollo 13 astronauts likely would have been lost without the lunar module, Griffin said.

The explosion occurred en route to the moon, roughly 200,000 miles from Earth. Loss of oxygen also affected power and water because the spacecraft’s fuel cells combined oxygen and hydrogen to create electricity and water for the command module.

The command module had some battery power, but that would be needed to re-enter the Earth’s atmosphere and deploy parachutes. So the crew shut down the command module to conserve those batteries and took refuge in the self-sustaining lunar module.

“It was the only option,” Haise said. “We didn’t think about it. It was the spacecraft that was going to be remaining.”

It was his job to calculate the “consumables” that’d be available while the crew slingshot around the moon and headed back to Earth. Water, used for drinking and cooling the avionic and electronic components, was his biggest concern.

His first calculation — before a maneuver hastened their pace home — determined the crew would run out of water five hours before re-entry. He knew from Apollo 11, where astronaut’s turned off the lunar module’s water when they left it in orbit, that the LM could survive about eight hours before a critical system overheated and failed. It’d be close, but they’d make it.

So the Apollo 13 crew only drank six ounces a day and used fruit juices. Their dehydration set an Apollo-era record: the crew lost a total of 31.5 pounds, nearly 50 percent more than any other crew, according to NASA’s description of the mission.

Power was also conserved. The lunar module had its own batteries, but those were only intended to last two days. Reducing power use resulted in the temperature dropping to 38 degrees Fahrenheit, perhaps colder. Condensation formed on the walls, and the astronauts each wore three pairs of underwear — all they had packed for the trip.

Carbon dioxide was a problem Haise didn’t foresee. Lithium hydroxide canisters were used to remove carbon dioxide, and there were plenty of these canisters. But the square canisters from the command module were not compatible with the round openings in the lunar module. So mission control devised a way to put a square peg in a round hole using plastic bags, cardboard and tape.

One of the final hurdles came as the men approached their home. The command module, which had a heat shield to protect the crew upon reentry, had never been turned off in space. And now it had to be woken from a long, cold sleep. This required a new procedure that was worked out and written up on the ground.

“We had to go read it and invariably (the astronauts would) say, ‘Was that circuit breaker B or A?’” Griffin recalled. “So they were going back and forth in this arduous reading of this procedure.”

Using towels to wipe condensation off the instrument panel, Haise also knew there was a chance for short circuits. But thankfully the command module came back to life. The condensation felt like rain as the crew landed in the Pacific Ocean on April 17, 1970.

As dramatic as the situation was, the well-honed NASA procedures and communication protocols made for undramatic audio, Griffin and Haise agreed. There was always another idea to try, and they never talked about losing the crew, said Griffin, who is now 85.

Ron Howard, who directed the “Apollo 13” movie, added some cinematic tension, said Haise, now 86, because the mission audio was so calm.

“He said, ‘I listened to all of that, and it never was clear to me you ever had a problem,’” Haise recalled. “Because it was just like normal. We were troubleshooting or reading procedures up and executing them. So to him it was just a normal day’s work.”

That was possible thanks to hours and hours of training. Of completing simulations where problems would arise to test the crew and mission control.

“No, we hadn’t seen that kind of failure,” Griffin said. “We hadn’t actually simulated it, but it didn’t take us long to figure out what we had to do. And that was because we were ready for it.”

At the end of the Apollo program, it turns out Apollo 13 had fewer anomalies - problems or technical issues - than most other missions that flew both the command module and the lunar module, Haise said. It just happened to have a big anomaly.

NASA spokeswoman Gina Anderson said the agency is using lessons from many missions, past and present, to ensure success for its Artemis program. It will provide Artemis updates this month, including the companies selected to develop the new human landing systems.

More on Artemis: NASA shares its vision for creating sustained human presence on the moon

Key to its success will be funding, particularly for this lunar lander. President Donald Trump’s budget proposal for fiscal year 2021 includes $3.4 billion for its development.

“In a sense, that’s the catch-up money,” said John Logsdon, founder of George Washington University’s Space Policy Institute. “Without a lander you’re not going to land. You need some vehicle to transport humans to the lunar surface.”

Haise never did walk on the moon, but that seems less important now that no one has landed on the moon since 1972. He at least got a fly-by.

“Today I just feel very fortunate, lucky, to be around at that time,” Haise said.