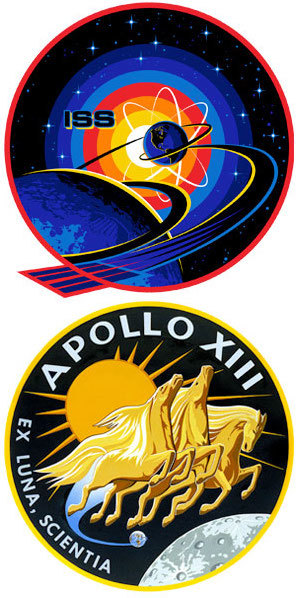 Astronauts on the International Space Station reflected on the 50th anniversary of the historic Apollo 13 mission while considering the challenges facing their own safe return to Earth.

NASA flight engineers Andrew Morgan and Jessica Meir, along with soon-to-be Expedition 63 commander Chris Cassidy, spoke to reporters from on board the orbiting laboratory on Friday (April 10), a day before the anniversary of the Apollo 13 launch in 1970.

"Fifty years ago, Apollo 13 had a crisis in space and the flight control team, Mission Control and those on the ground prevailed through their ingenuity, their professionalism and brought the crew home safely," said Morgan. "And now, we are on board here during the anniversary of Apollo 13."

On April 13, 1970, an oxygen tank explosion aboard the Apollo 13 service module crippled the spacecraft, which threatened to strand James Lovell, Fred Haise and Jack Swigert in deep space between Earth and the moon. The flight controllers in Mission Control, working with the Apollo 13 crew, worked the "problem" to bring the astronauts home.

Morgan and Meir, together with their Expedition 62 crewmate, Roscosmos cosmonaut Oleg Skripochka, are scheduled to land aboard Russia's Soyuz MS-15 spacecraft on the steppe of Kazakhstan on April 17, 50 years to the day after the Apollo 13 command module "Odyssey" splashed down in the Pacific Ocean.

"I believe our landing date corresponds with the landing day of Apollo 13 and now, once again, there is a crisis, [but] the crisis is on Earth," said Morgan.

Rather than face a challenge in space, as the Apollo 13 crew did, Morgan, Meir and Skripochka are facing a return to Earth where a global pandemic, the novel coronavirus (COVID-19), has affected millions of people and poses an increased health risk to them. After months aboard the space station, the crewmates have weakened immune systems.

"Once again, the mission control centers, the flight control team are going to bring us home safely," said Morgan. "They have been affected by this just as everyone."

"Just the way that mission control operations have worked, they are handing off between shifts between two different [mission control] rooms to minimize the contact," he said. "Here they are persevering and through their professionalism, they are going to return us to Earth safely — just like their predecessors did 50 years ago."

Cassidy boarded the space station on Thursday, after arriving aboard Soyuz MS-16 with cosmonauts Anatoli Ivanishin and Ivan Wagner. He, too, paid tribute to the Apollo 13 mission through one of the emblems that he and his crewmates wore into orbit.

The Expedition 63 mission patch, designed with artist Blake Dumesnil, features 13 illuminated stars along its top to commemorate the 50th anniversary of the Apollo 13 flight. The insignia also depicts the moon adorned with an astronaut's boot print in honor of the entire Apollo program and as a nod to the future missions that will return astronauts to the lunar surface.