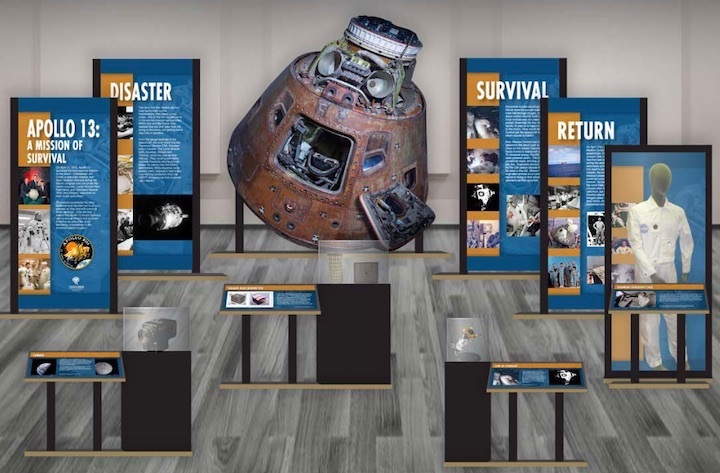 "Houston, we've had a problem."

That line is one of the most memorable of the Apollo 13 mission, which can be largely attributed to the Hollywood film starring Academy Award winner Tom Hanks, made 25 years later after the original mission.

Apollo 13 was supposed to be the third moon landing. Commander Jim Lovell and Lunar Module Pilot Fred Haise would have been the fifth and sixth Americans to walk on the moon.

While en route to the moon, one of the oxygen tanks in the Apollo service module ruptured, forcing the crew to head to the lunar module called, Aquarius and stay there until their return home.

Prior to the launch, a worker who had been moving the oxygen tank had dropped it, former NASA historian Roger Launius told FLORIDA TODAY.

Working tirelessly with mission control in Houston, Lovell, Haise and Command Module pilot John Swigert turned Aquarius into a lifeboat that would grant them safe passage home, which they did on April 17, 1970.

"When our backs are to the wall, when we know that there's a threat there, people rise to the occasion," Launius said.

Houston, we had a problem, and now, it seems the world is dealing with a bigger one.

As the coronavirus pandemic continues to spread around the world, it's moments like the Apollo 13 mission, where American ingenuity played a vital role in returning the crew home alive that could be key to continuing the fight against the virus.

People all around the world continue to find innovative ways to help stop the spread. Whether through restaurant owners pivoting to provide take-out and delivery to keep their businesses afloat and protect their workers or aerospace companies like Blue Origin and Virgin Orbit making face shields and ventilators.

"Fifty years ago, with Apollo 13, they had a crisis in space, and the flight control team, mission control on the ground prevailed through their ingenuity, their professionalism and brought the crew home safely," NASA astronaut Andrew Morgan told reporters during a Friday teleconference.

"Now, there's a crisis on earth, and once again our mission control centers, the flight control team are going to bring us home safely ... Here they are persevering, and through their ingenuity and their professionalism, they're going to return us to Earth safely just like their predecessors did 50 years ago."

Raumfahrt - Houston, we have another problem: Fifty years after Apollo 13, the world faces a global pandemic
495 Views
Created with page4