An international research team led by the Department of Physics and Astronomy at the University of Turku, Finland, mapped the interstellar magnetic field structure and interstellar matter distribution in the solar neighbourhood.  The results of the study have been published in the esteemed European journal Astronomy & Astrophysics (A&A) in March.

Magnetic field has an important role in the processes of stellar and planetary system formation. The study led by Docent Vilppu Piirola and Docent Andrei Berdyugin is based on high-precision polarisation measurements. Starlight passing through interstellar clouds is polarised by scattering from dust particles aligned by the magnetic field.

— Polarisation means that electromagnetic oscillation is stronger in a specific direction that is perpendicular to the direction of motion of the light. The alignment of small, less than one micrometer in size, elongated dust particles is based on the same phenomenon as a compass needle aligning with the Earth's magnetic field, although it is a more complicated process, explains Vilppu Piirola.

What makes the study particularly significant, is its connection with the results obtained from the Interstellar Boundary EXplorer (IBEX) orbiter sent to explore the interaction between the Sun and the magnetic field in the solar neighbourhood. The Sun and its magnetic field interact with the surrounding interstellar matter, and the solar wind creates a so-called local bubble where the matter density is low and only little dust exists. The task of the IBEX is to observe the interface between the Sun’s heliosphere and interstellar space and matter where the solar wind practically stops. 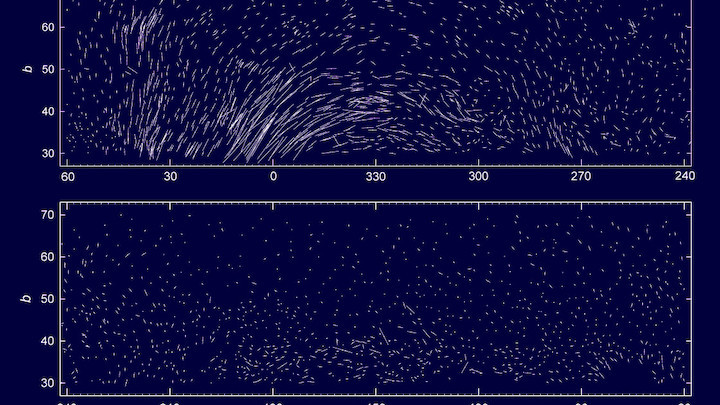 The structure of magnetic field and the distribution of dust in space is revealed by high-precision polarisation measurements. The figure shows the degree and direction of polarisation of more than 2000 stars in Galactic coordinates. The size of the dust particles responsible for polarisation at the optical wavelengths is less than one micrometer, i.e., similar to solid particles in 'smoke'.

The IBEX receives information of the interstellar magnetic field (ISMF) by observing energetic neutral atoms (e.g. neutral hydrogen) that pass through the heliospheric boundary. The ISMF direction, however, can be accurately determined only by polarisation measurements. High-precision equipment with polarisation detection sensitivity at the level of or better than 0.001 % (one part in hundred thousand) has been developed for these type of measurements at the Tuorla Observatory of the University of Turku.

Four telescopes have been used for the observations of this recently published study: two in Hawaii (Mauna Kea and Haleakala observatories), one in La Palma (Nordic Optical Telescope), and one in the southern hemisphere at the Greenhill Observatory of the University of Tasmania.

— The observations have revealed interesting magnetic filament structures both in the direction where our solar system is moving in relation to the surrounding interstellar space (heliosphere 'nose') and in the opposite direction (heliosphere 'tail').  The filaments form ribbon-like arcs where dust particles and starlight polarisation have aligned with the direction of the magnetic field, says Piirola.

The results of the study have been published in the March issue of the esteemed European Astronomy & Astrophysics (A&A) journal. The article has also been selected as an A&A Highlight. The A&A Editors select particularly interesting papers as Highlights.