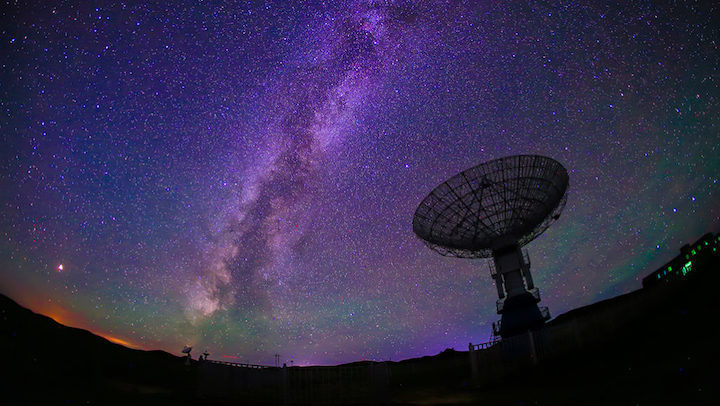 For about a week in 1960, radio astronomer Frank Drake thought he might have discovered aliens.

He had pointed the National Radio Astronomy Observatory’s new 26-meter telescope at the star Epsilon Eridani on April 8 of that year, and within minutes, the instruments went wild. The telescope’s readout device, a chart recorder that used a pen to scratch out signatures of incoming signals on paper, scribbled erratically. A speaker connected to the telescope blared a train of strong pulses — just the kind of transmission expected from an intelligent sender. Drake was stunned. Could finding E.T. really be this easy?

It wasn’t. When the telescope found the signal again several days later, a radio antenna pointed in different direction also picked up the noise. The signal wasn’t otherworldly at all; it was coming from an earthly source, like an airplane.

Drake never picked up any interstellar broadcasts during his two months observing Epsilon Eridani and another sunlike star, Tau Ceti, with the radio telescope in West Virginia (SN: 4/30/60). But that first foray into the search for extraterrestrial intelligence, or SETI, sparked a growing field of efforts to scout out fellow intelligent creatures among the stars. And now, with recent discoveries in astronomy, new technologies and a flush of new money, SETI is in renaissance.

“It’s really difficult to overstate how much the field has been transformed” in the last few years, says Andrew Siemion, director of the University of California, Berkeley’s SETI Research Center.

Bigger and better telescopes are probing deeper into the night sky. Sophisticated computational tools are poring over massive datasets on increasing numbers of stars and at a wider variety of frequencies. Observatories around the world are performing regular observations as part of Breakthrough Listen — a $100 million effort funded by Russian billionaires Yuri and Julia Milner to conduct the most comprehensive search for extraterrestrials yet (SN: 7/20/15).

So far, SETI scientists have found nothing but radio silence. Still, they are undeterred. They’ve scoured only a tiny fraction of the places E.T. could be (SN: 9/30/18). And SETI’s collective observing power will make scientists 1,000 times more likely to find E.T. during this decade than they were in the 2010s, Siemion says.

Eyes on the sky

For decades, the hunt for intelligent aliens languished on the fringes of the scientific establishment (SN: 1/28/19), viewed by many researchers as a “strange, boutiquey sort of thing that’s not really astronomy,” says Siemion, principal investigator for Breakthrough Listen. Short-lived U.S. federal funding for the field abruptly ended in 1993, after which “SETI went underground and became very insular.”

But SETI’s profile is changing, as our understanding of the universe evolves. Back when Drake was making his observations, we hadn’t yet laid eyes on a planet around another star. Within just the last decade, we’ve discovered thousands of exoplanets, giving new credence to arguments that life beyond Earth is entirely possible (SN: 10/4/19).

In February, Breakthrough Listen released the largest ever stockpile of SETI observations for members of the astronomical community to analyze. The dataset, collected by the Parkes radio telescope in Australia, the Green Bank Telescope in West Virginia and the Automated Planet Finder in California, included a survey of radio emissions from the disk of the Milky Way and the region around its core supermassive black hole.

“For finding very advanced civilizations, I think the galactic center is very exciting,” Siemion says. There, he speculates that some super tech-savvy aliens could have built an extremely powerful radio transmitter charged by the Milky Way’s supermassive black hole.

To find alien civilizations working with more modest radio equipment comparable to our own, searchers look to nearby stars. That was the approach that Sofia Sheikh, an astronomer at Penn State, took in analyzing Breakthrough Listen observations of 20 of the sun’s stellar neighbors. All of those stars are in positions relative to Earth that would allow any aliens around those stars to see Earth orbiting in front of the sun — the same way that telescopes like TESS spot exoplanets (SN: 1/8/19). Those aliens might therefore be able detect Earth’s presence and target our planet with a message.

Sheikh and colleagues came up empty in their search. “Reporting null results isn’t fun,” she says of her analysis, which was posted at arXiv.org on February 14 and submitted to the Astrophysical Journal. But it does tell other astronomers “this particular space has already been searched, go search somewhere else,” she says. Given the vast cosmic real estate where E.T. might be, checking out every little stellar neighborhood helps.

New observatories joining the Breakthrough Listen cohort will start looking in a lot of other places in the next few years. The MeerKAT array in South Africa is gearing up to survey 1 million nearby stars. The Very Large Array in New Mexico, seen in the 1997 film Contact, is getting its first SETI instrument and will start looking for aliens in the background of its observations for other astronomy studies in 2021.

Getting more eyes on the sky is a key part of SETI. But while telescopes are heaping up a massive haystack of data, there’s still the task of searching for any needles buried within. And it could take picking through the same data more than once. New computer algorithms can always revisit old observations to search for blips that previous analyses missed.

Often in radio astronomy, “the most interesting discoveries are not made on the first or the second or even the third analysis of the dataset,” Siemion says. For example, brief, brilliant flashes of radio waves from distant galaxies called fast radio bursts were first discovered in a reexamination of old data from the Parkes telescope (SN: 7/25/14).

In SETI, the perennial challenge is devising techniques to better distinguish potential alien signals from radio interference by earthly technology. SETI scientists are usually seeking the same kind of tight, well-defined radio transmissions that human electronics produce. Such signals are easily distinguishable from radio waves emanating from natural sources, such as stars or galaxies, which tend to vary slowly over time or be smeared out across many frequencies. But that means scientists have to judge whether any promising signals they detect are coming from deep space or from a nearby a cell phone or satellite.

One way of doing this is to point a telescope at a target, like a star, then somewhere else. Any radio signals that appear when the telescope is pointed in both directions are probably humanmade radio interference. Conventional computer algorithms detect changes between on-star and off-star observations simply by comparing the amount of energy detected in each observation. But if a faint alien transmission overlaps in the sky with earthly noise, a basic energy-detection algorithm may mistakenly discount everything it sees as humanmade noise.

Some researchers hope artificial intelligence will be better than rigid energy-detection algorithms at detecting subtle changes between on- and off-star observations. While at the Berkeley SETI Research Center, applied machine learning researcher Yunfan Gerry Zhang taught an AI to recognize radio interference from human technology by showing it thousands of observations from the Green Bank Telescope. Using its learned sense of what earthly radio interference looked like, the AI could accurately pick out humanmade noise that was mixed into on-star observations.

If such an algorithm were to detect radio signals from a star that didn’t qualify as humanmade noise, the AI could flag that star for researchers as a potential source of alien transmissions. Zhang’s team presented the AI at the 2018 IEEE Global Conference on Signal and Information Processing as a tool for finding oddities in future SETI investigations.

Radio waves, the focus of mainstream SETI, are not the only means of sending interstellar messages. Aliens could also encode information in nanosecond laser pulses. Though lasers were first suggested as potential interstellar beacons in 1961, most SETI searches have followed Drake in looking for radio communications — partly because radio waves are low energy, and so possibly a more cost-effective way to package interstellar mail.

But optical light could also be a practical interstellar beacon if focused into a narrow laser beam, argue proponents of this approach, called optical SETI or OSETI. Fast laser flashes would be would be detected as a bunch of photons hitting the telescope all at once, as opposed to the steady trickle of incoming photons from background starlight. As a result, for the nanosecond duration of the laser pulse, it could outshine surrounding stars. And no known astrophysical sources produce nanosecond optical blips.

“Optical SETI is still in its infancy, or early toddler phase,” compared with radio SETI, says Shelley Wright, an astrophysicist at the University of California, San Diego. But if used in tandem with radio scans of the sky, OSETI efforts can expand the search into entirely different mode of communication.

In July 2019, the VERITAS telescope array at the Whipple Observatory in Arizona joined Breakthrough Listen. This telescope quartet was built to watch for brief flashes of blue “Cherenkov” light generated by astrophysical gamma rays hitting Earth’s atmosphere. But its fast cameras are also well suited to looking for E.T.’s laser beams.

The VERITAS Breakthrough Listen effort involves both new optical stellar observations and a review of old VERITAS data. Already, some of those analyses have garnered results, even if somewhat disappointing. Nine hours of observations taken from 2009 to 2015 of Tabby’s Star — once suspected of holding an alien megastructure in its orbit due to its bizarre periodic dimming (SN: 1/3/18) — found no alien laser beacons, the researchers reported in the Astrophysical Journal Lettersin 2016.

Wright and colleagues hope to dramatically expand OSETI with new facilities. While previous OSETI searches, including VERITAS, have targeted specific stars for only minutes at a time, Wright’s team has drawn up a blueprint for four dedicated SETI observatories to keep constant vigil for alien laser pulses across the entire observable sky.

This observatory concept, dubbed PANOSETI, was described at the SPIE Astronomical Telescopes + Instrumentation meeting in Austin, Texas, in July 2018. Each observatory would be a dome covered in 88 lenses with optical and near-infrared detectors. One pair of observatories in the Northern Hemisphere would keep watch over the northern sky, while a second pair in the south would keep tabs on the southern sky.

Two observatories in two different locations would have to keep watch over the same part of the sky to ensure that anything a single observatory detected wasn’t a glitch or an effect caused by local light pollution, Wright says — the same way a pair of far-flung LIGO detectors teamed up to detect cosmic ripples called gravitational waves (SN: 2/11/16). “Nobody would have believed LIGO without a secondary site,” she says. Double-checking potential detections would be absolutely crucial for a claim as extraordinary as receiving a greeting from E.T.