They say variety is the spice of life, and now new discoveries from Johns Hopkins researchers suggest that a certain elemental ‘variety’—sulfur—is indeed a ‘spice’ that can perhaps point to signs of life.

These findings from the researchers’ lab simulations reveal that sulfur can significantly impact observations of far-flung planets beyond the solar system; the results have implications for the use of sulfur as a sign for extraterrestrial life, as well as affect how researchers should interpret data about planetary atmospheres.

A report of the findings was published today in Nature Astronomy.

“We found that just a small presence of sulfur in the atmosphere, less than 2%, can have major impacts on what, and how many, haze particles are formed,” says Chao He, an assistant research scientist in the Department of Earth and Planetary Sciences at The Johns Hopkins University and the study’s first author.

“This entirely changes what scientists should look for and expect when they examine atmospheres on planets beyond our solar system.” 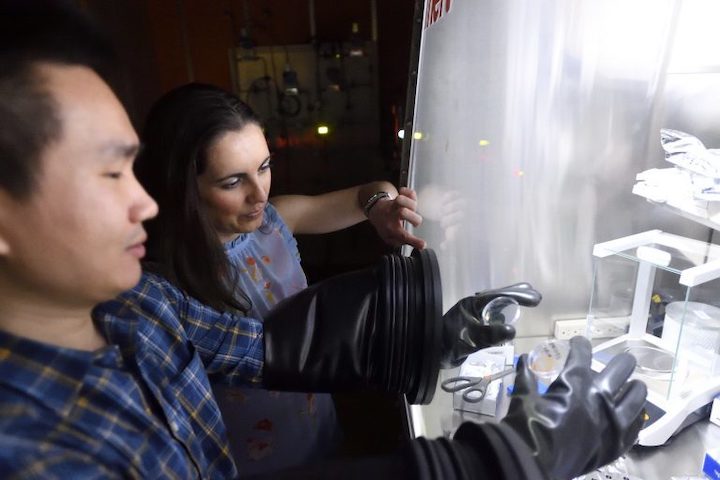 While scientists already know that sulfur gases influence the photochemistry of many planets within the solar system such as Earth, Venus and Jupiter, not much is known about sulfur’s role in the atmospheres of planets beyond the solar system, or exoplanets.

Due to its role as an essential element for life on Earth—emitted from plants and bacteria, and found in several amino acids and enzymes—scientists propose to use sulfur products to search for life beyond Earth. Understanding whether sulfur exists and how it affects these atmospheres can help scientists determine whether sulfur gases could be used as a source for life to originate, says He.

Researchers have performed few studies simulating planetary atmospheres with sulfur in the lab due to its high reactivity and difficulty to clean up once an experiment is done, says He. In fact, sulfur is so reactive that it would have even reacted with the experimental setup itself, so the research team had to upgrade their equipment to properly tolerate sulfur. To He’s knowledge, only three other studies that simulated sulfur chemistry in the lab exist, and those were to understand its role in Earth’s atmosphere; this is the first lab-run simulation to study sulfur in exoplanet atmospheres.

Chao and colleagues performed two sets of experiments using carbon dioxide, carbon monoxide, nitrogen, hydrogen, water and helium as a guide for their initial gas mixtures. One experiment included 1.6% sulfur in the mix and the other did not. The research team performed the simulation experiments in a specially designed Planetary HAZE (PHAZER) chamber in the lab of Sarah Hörst, assistant professor of Earth and Planetary Sciences and second author on the paper.

Once in the chamber, the team exposed the gas mixtures to one of two energy sources:
plasma from an alternating current glow discharge or light from an ultraviolet lamp. Plasma, an energy source stronger than UV light, can simulate electrical activities like lightning and/or energetic particles, and UV light is the main driver of chemical reactions in planetary atmospheres such as those on Earth, Saturn and Pluto.

Chao’s team found that most of these particles were organic sulfur products rather than sulfuric acid or octasulfur, which researchers previously believed would make up the majority of sulfur particles on exoplanets.

“This new information means that if you’re trying to observe an exoplanet’s atmosphere and analyze its spectra, when you previously expected to see other products, you should now expect to see these organic sulfur products instead. Or, at least, you should know that it wouldn’t be unusual for them to be there. This would change researchers’ explanation and interpretation of spectra they see,” says He.

Similarly, the findings should direct researchers to expect more haze particles if they are observing exoplanet atmospheres with sulfur, as just a small bit of sulfur increases haze production rate by three. Again, this would change how researchers interpret their findings and could be critical for future observation of exoplanets.

The last major implication of his findings, He says, is they push for heightened awareness that many sulfur products can be produced in the lab, in the absence of life, so scientists should be caution and rule out photochemically-produced sulfur before suggesting sulfur’s presence as a sign for life.