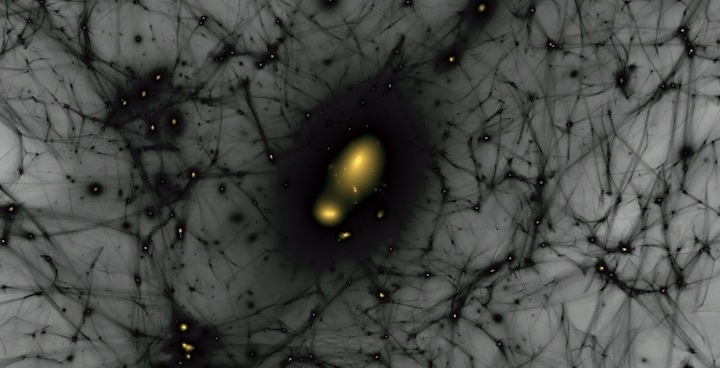 Just as the sun has planets and the planets have moons, our galaxy has satellite galaxies, and some of those might have smaller satellite galaxies of their own. To wit, the Large Magellanic Cloud (LMC), a relatively large satellite galaxy visible from the Southern Hemisphere, is thought to have brought at least six of its own satellite galaxies with it when it first approached the Milky Way, based on recent measurements from the European Space Agency’s Gaia mission.

Astrophysicists believe that dark matter is responsible for much of that structure, and now researchers at the Department of Energy’s SLAC National Accelerator Laboratory and the Dark Energy Survey have drawn on observations of faint galaxies around the Milky Way to place tighter constraints on the connection between the size and structure of galaxies and the dark matter halos that surround them. At the same time, they have found more evidence for the existence of LMC satellite galaxies and made a new prediction: If the scientists’ models are correct, the Milky Way should have an additional 150 or more very faint satellite galaxies awaiting discovery by next-generation projects such as the Vera C. Rubin Observatory’s Legacy Survey of Space and Time.

The new study, forthcoming in the Astrophysical Journal and available as a preprint here, is part of a larger effort to understand how dark matter works on scales smaller than our galaxy, said Ethan Nadler, the study’s first author and a graduate student at the Kavli Institute for Particle Astrophysics and Cosmology (KIPAC) and Stanford University.

“We know some things about dark matter very well – how much dark matter is there, how does it cluster – but all of these statements are qualified by saying, yes, that is how it behaves on scales larger than the size of our local group of galaxies,” Nadler said. “And then the question is, does that work on the smallest scales we can measure?”

Such discoveries are always exciting, but what’s perhaps most exciting is what the data could tell us about the cosmos. “For the first time, we can look for these satellite galaxies across about three-quarters of the sky, and that’s really important to several different ways of learning about dark matter and galaxy formation,” said Risa Wechsler, director of KIPAC. Last year, for example, Wechsler, Nadler and colleagues used data on satellite galaxies in conjunction with computer simulations to place much tighter limits on dark matter’s interactions with ordinary matter.

Now, Wechsler, Nadler and the DES team are using data from a comprehensive search over most of the sky to ask different questions, including how much dark matter it takes to form a galaxy, how many satellite galaxies we should expect to find around the Milky Way and whether galaxies can bring their own satellites into orbit around our own – a key prediction of the most popular model of dark matter.

The answer to that last question appears to be a resounding “yes.”

A simulation of the formation of dark matter structures from the early universe until today. Gravity makes dark matter clump into dense halos, indicated by bright patches, where galaxies form. At about 18 seconds into this simulation, a halo like the one that hosts the Milky Way begins to form near the center top of the frame. Shortly afterward, a smaller halo begins to take shape at the top center of the screen. This halo falls into the first, larger halo by about 35 seconds, mimicking the Large Magellanic Cloud’s fall into the Milky Way. SLAC and Stanford researchers, working with collaborators from the Dark Energy Survey, have used simulations like these to better understand the connection between dark matter and galaxy formation. (Ralf Kaehler/SLAC National Accelerator Laboratory)

The possibility of detecting a hierarchy of satellite galaxies first arose some years back when DES detected more satellite galaxies in the vicinity of the Large Magellanic Cloud than they would have expected if those satellites were randomly distributed throughout the sky. Those observations are particularly interesting, Nadler said, in light of the Gaia measurements, which indicated that six of these satellite galaxies fell into the Milky Way with the LMC.

To study the LMC’s satellites more thoroughly, Nadler and team analyzed computer simulations of millions of possible universes. Those simulations, originally run by Yao-Yuan Mao, a former graduate student of Wechsler’s who is now at Rutgers University, model the formation of dark matter structure that permeates the Milky Way, including details such as smaller dark matter clumps within the Milky Way that are expected to host satellite galaxies. To connect dark matter to galaxy formation, the researchers used a flexible model that allows them to account for uncertainties in the current understanding of galaxy formation, including the relationship between galaxies’ brightness and the mass of dark matter clumps within which they form.

An effort led by the others in the DES team, including former KIPAC students Alex Drlica-Wagner, a Wilson Fellow at Fermilab and an assistant professor of astronomy and astrophysics at the University of Chicago, and Keith Bechtol, an assistant professor of physics at the University of Wisconsin-Madison, and their collaborators produced the crucial final step: a model of which satellite galaxies are most likely to be seen by current surveys, given where they are in the sky as well as their brightness, size and distance.

Those components in hand, the team ran their model with a wide range of parameters and searched for simulations in which LMC-like objects fell into the gravitational pull of a Milky Way-like galaxy. By comparing those cases with galactic observations, they could infer a range of astrophysical parameters, including how many satellite galaxies should have tagged along with the LMC. The results, Nadler said, were consistent with Gaia observations: Six satellite galaxies should currently be detected in the vicinity of the LMC, moving with roughly the right velocities and in roughly the same places as astronomers had previously observed. The simulations also suggested that the LMC first approached the Milky Way about 2.2 billion years ago, consistent with high-precision measurements of the motion of the LMC from the Hubble Space Telescope.

In addition to the LMC findings, the team also put limits on the connection between dark matter halos and galaxy structure. For example, in simulations that most closely matched the history of the Milky Way and the LMC, the smallest galaxies astronomers could currently observe should have stars with a combined mass of around a hundred suns, and about a million times as much dark matter. According to an extrapolation of the model, the faintest galaxies that could ever be observed could form in halos up to a hundred times less massive than that.

And there could be more discoveries to come: If the simulations are correct, Nadler said, there are around 100 more satellite galaxies – more than double the number already discovered – hovering around the Milky Way. The discovery of those galaxies would help confirm the researchers’ model of the links between dark matter and galaxy formation, he said, and likely place tighter constraints on the nature of dark matter itself.

The research was a collaborative effort within the Dark Energy Survey, led by the Milky Way Working Group, with substantial contributions from junior members including Sidney Mau, an undergraduate at the University of Chicago, and Mitch McNanna, a graduate student at UW-Madison. The research was supported by a National Science Foundation Graduate Fellowship, by the Department of Energy's Office of Science through SLAC, and by Stanford University.